Today the world gasps as we preview The Skyscraper Wonder Woman for the upcoming DC Comics HeroClix: 15th Anniversary – Elseworlds set, available at your Friendly Local Game Store this Wednesday! 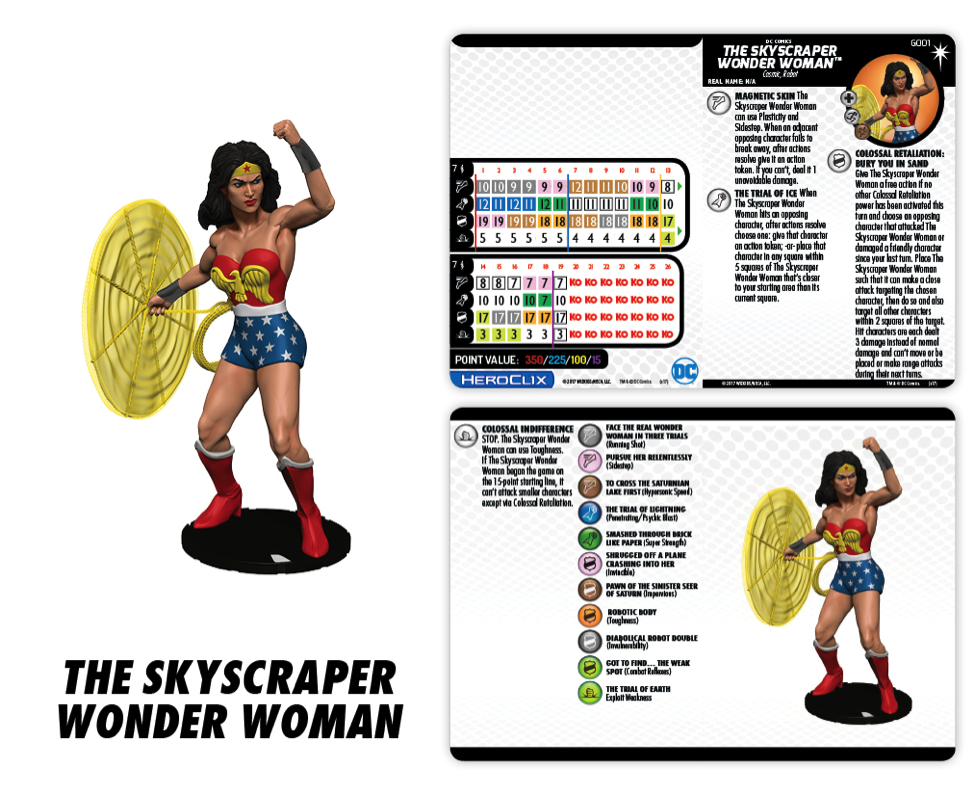 A robotic creation of Sinister Seer of Saturn, The Skyscraper Wonder Woman is a titanic version of our beloved heroine, built specifically to face her in a series of trials. This giantess has four available starting lines, giving us plenty of options to include her on a variety of build totals. She can be played at 350, 225, 100 or 15 points. No matter which point value you choose, she will have a range of 7 to attack with, Willpower via Indomitable as any giant automaton should, and the obvious Colossal damage symbol, granting the size abilities that go along with it.

To examine her dial, we’ll start at the beginning and work our way down since some or all of the powers will come and go depending on which starting line you use. On top click at 350 points, she can dash forward with Running Shot and deal serious damage with range attacks using Penetrating/Psychic Blast. A monstrous 12 attack and 5 damage are protected by her defensive value of 19 and Invincible, as this jumbo Wonder Woman is built for durability. Her defense gives way to Impervious for a of couple clicks before the end of this first section contains a new lineup of powers with Sidestep, Super Strength and Toughness, all signs of a Skyscraper Wonder Woman in relentless pursuit to apply her muscle to the opposition.

The 225-point starting line on click 7 gives us a powerful hit-and-run bulletproof speedster, as she possesses both Hypersonic Speed and Impervious with a consistent 4 damage. We also see her first special power here, The Trial of Ice. After hitting an opposing character while this power is showing, The Skyscraper Wonder Woman can choose to either give that character an action token or place that character within 5 squares as long as it’s closer to your starting area than its current square. The last two clicks of this section again give us the trio of Sidestep, Super Strength and Toughness as seen on clicks 5 & 6.

At 100 points, The Skyscraper Wonder Woman is showing some weakness by starting without a damage reducer but still has Combat Reflexes making her more difficult to hit with close attacks; she eventually gets Invulnerability after a couple clicks though. She can find her own soft spots in opposing characters by using Exploit Weakness with threatening damage values and has another special power here, Magnetic Skin, which is represented by giving her Sidestep and Plasticity. In addition to that, Magnetic Skin is a huge threat to adjacent characters that try to run – when an adjacent opposing character fails to break away, it will receive an action token after actions resolve, but if it already has two tokens, it will instead receive 1 unavoidable damage. That’s a huge bane to any opposing character that ends up adjacent to this behemoth! On clicks 11 & 12 (or 5th & 6th if she started at 100) she once again has the now-familiar Sidestep, Super Strength and Toughness combo.

The last click of her dial no matter what point value you play her at (or first and only click at 15 points) reveals two more special powers. First we have to stop on her damage power, Colossal Indifference. This is a STOP click that lets our big footed friend use Toughness and has a disclaimer, telling us that the 15-point version of The Skyscraper Wonder Woman can’t attack smaller characters except via Colossal Retaliation.

Speaking of which, her special power in the defense slot on this final click is Colossal Retaliation: Bury You in Sand. If no other Colossal Retaliation power has been used on the same turn, a free action may be given to place The Skyscraper Wonder Woman where she could make a close attack against an opposing character that attacked her or damaged a friendly character since your last turn. Then The Skyscraper Wonder Woman can make a close attack targeting that character and all other characters within 2 squares of it – all hit characters are dealt 3 damage and can’t be moved, placed, or make range attacks during their next turns.

At 350 points you’re getting a 19-click dial that starts as a ranged powerhouse with sky-high combat values. At 225 she begins as a Hypersonic Speed threat that packs a punch. Her 100-point dial is a more manageable opponent but has dangerous tie-up potential. When paying just 15 points for her, she’s a one-click wonder featuring Colossal Retaliation.

Thanks for reading and remember to go big or go home with your dice rolls! Don’t forget to visit your FLGS this Wednesday to pick up DC Comics HeroClix: 15th Anniversary – Elseworlds and participate in a Release Day Organized Play Event!