Marvel HeroClix: What If? – Punisher

Today, we’re taking a look at two figures from the Marvel HeroClix 15th Anniversary: What If? set, available in stores now. Today, we’re exploring two uniquely different versions of the Punisher that you can pull during your Release Day OP Events! 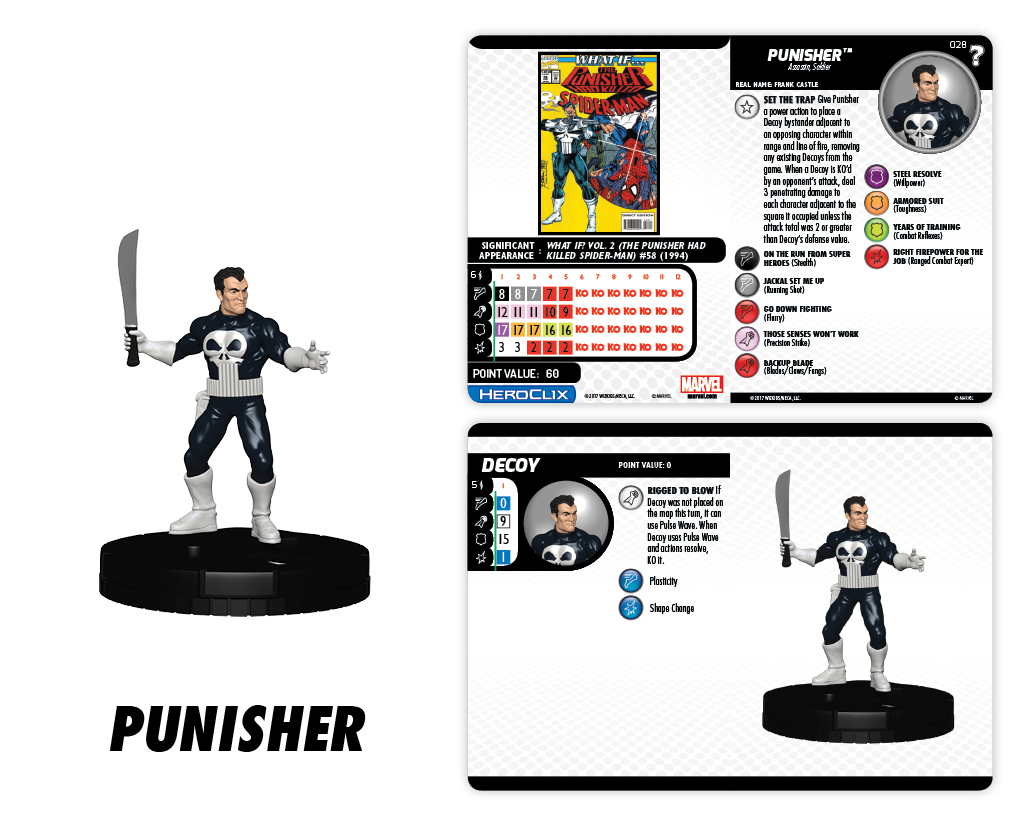 Up first is the Punisher from the What If? storyline where, instead of merely being the antithesis of Spider-Man in his first appearance, he instead killed Spidey! This figure is a 60-point piece, with five clicks of life, and a range of six squares with one target. Punisher can be played on both Assassin and Soldier themed teams.

First and foremost, Punisher carries a trait called Set the Trap. This trait allows you to give Punisher a power action to place a Decoy bystander adjacent to an opposing character within range and line of fire, removing any existing Decoys from the game. When a Decoy is KO’d by an opponent’s attack, deal 3 penetrating damage to each character adjacent to the square it occupied, unless the attack total was 2 or greater than Decoy’s defense value.

The Decoy itself a 1 click bystander, that cannot move. That said, it does carry a special power called Rigged to Blow, which states that if Decoy was not placed on the map this turn, it can use Pulse Wave. When Decoy uses Pulse Wave and actions resolve, KO it. It also carries Plasticity and Shape Change, making it a great tie up piece to really cause trouble for your opponent.

Back to Punisher, outside of that trait he carries quite a few standard powers, including Stealth, Running Shot, Flurry, Precision Strike, Blades/Claws/Fangs, Willpower, Toughness, Combat Reflexes, and Ranged Combat Expert. He’s a fighting machine for every situation at a very low point investment, and a great character to add to your team.

Our second version of Frank Castle is the Punisher of the Strange! Punisher of the Strange is a 100-point piece, carrying seven clicks of life, with a range of six squares with one target. He possesses two traits. The first, called From an Alternate Earth states that if this character is on your sideline, you may give a free action to a friendly character named Dr. Strange or Punisher that’s equal or more points. Replace that character with this character on the same click number.

His second trait is called To End the X-Vampires. This states that characters with the Monster keyword and adjacent opposing characters can’t be healed. With those two traits, Punisher of the Strange has a plethora of standard powers, including Running Shot, Stealth, Charge, Penetrating/Psychic Blast, Pulse Wave, Blades/Claws/Fangs, Toughness, Energy Shield/Deflection, Combat Reflexes, Probability Control, and Exploit Weakness. He’s a dangerous attacker and has so many powers that either ignore or break through defensive powers, along with being able to reroll attacks that he’s a significant threat to any opposing team – all for only 100 points!

That’s it for today, ‘Clix fans! Visit your FLGS to pick up the new set and participate in a Release Day OP Event. We’ll be back soon with more exciting previews from our upcoming sets. Until then, may all our Blades rolls be sixes!