Greetings, HeroClix fans! It’s that time again, time to look at some exciting previews of upcoming 2017 Convention Exclusive figures from the Winter WizKids Open events! Today we’ll have a look at two things that go together like peanut butter and chocolate – the Pym Pocket Tank and the Pym Particle Tank!

First, lets look at the smaller of the two, the Pym Pocket Tank. This is a very simple dial to take in – 1 click of life, with the only standard power of Toughness to worry about. But we need to take a closer look at it’s three traits before we dismiss it. First, we have the trait, Personal Craft: Pym, which states that a themed team may include the Pym Pocket Tank, and is still a themed team, as long as a character named Ant-Man, Giant-Man, or Hank Pym is on your force. Next is Just a Keyring, which states that the Pym Pocket Tank must begin the game placed adjacent to a friendly character. And, when an adjacent friendly character moves, and actions resolve, you may place the Pym Pocket Tank adjacent to that character. Its final trait is called, That Can Return to its Original Size, and states that when an adjacent friendly character attacks an opposing character, the attacker may choose to modify its attack value by -1. If they do, and they hit, you then replace the Pym Pocket Tank with the #MP17-006a Pym Particle Tank on it’s orange starting line, with one of its squares being adjacent to the target. And, if the attacking character is named Ant-Man, Giant-Man, or Hank Pym, you would use the yellow starting line instead. Finally, when replacing this character, you may ignore characters and blocking terrain when placing it, and destroy any in squares it’s placed into. Any characters in squares it would be placed into are placed adjacent to it, and are dealt 2 penetrating damage. 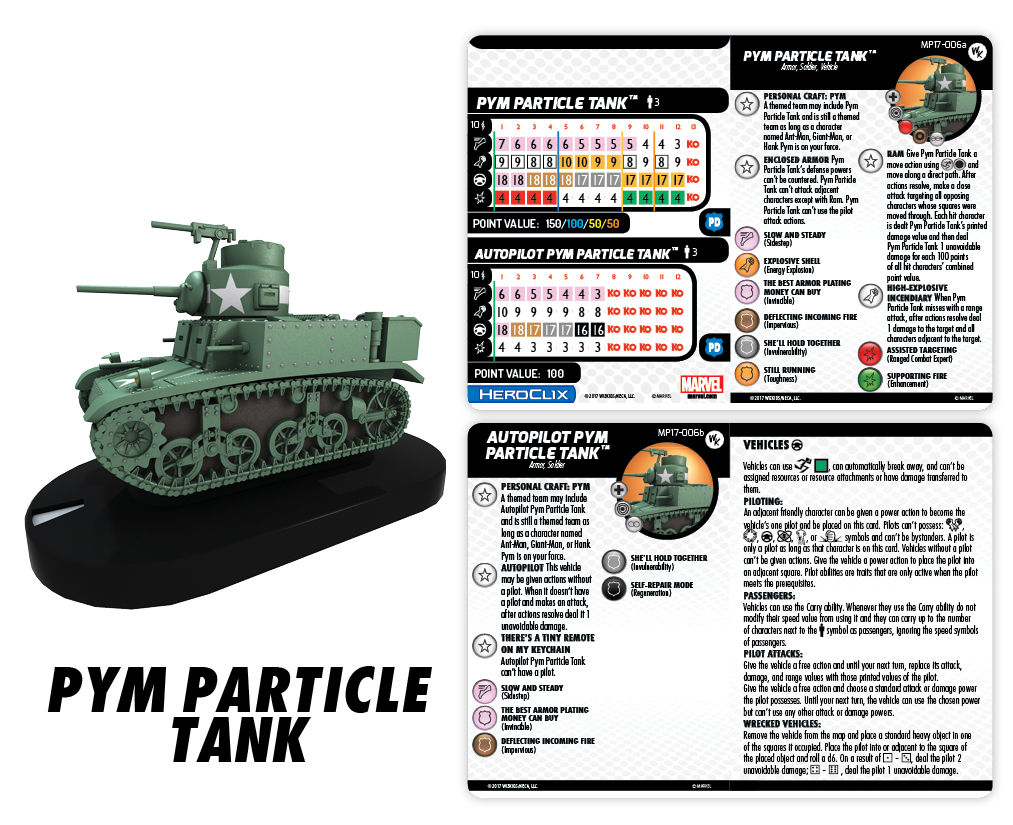 The piloted version of the tank also has a wide array of powers to support its traits. First, it has a special power called High-Explosive Incendiary, which states that when Pym Particle Tank misses with a range attack, after actions resolve, deal 1 damage to the target and all characters adjacent to the target. Along with that special power, Pym Particle Tank also possesses Sidestep, Energy Explosion, Invincible, Impervious, Invulnerability, Toughness, Ranged Combat Expert, and Enhancement.

The Autopilot Pym Particle Tank has 7 clicks of life, and can be played at 100 points. It also possesses the Personal Craft: Pym special power, which states that a themed team may include the Autopilot Pym Particle Tank, and is still a themed team as long as a character named Ant-Man, Giant-Man, or Hank Pym is on your force. It also has the standard Autopilot trait for vehicles, which as a refresher states that the vehicle may be given actions without a pilot, but when it doesn’t have a pilot and makes an attack, after actions resolve the vehicle is dealt 1 unavoidable damage. The final trait is called There’s a Tiny Remote on My Keychain, which states that Autopilot Pym Particle Tank can’t have a pilot. With those traits, you also get the standard powers Sidestep, Invincible, Impervious, Invulnerability, and Regeneration.

And that concludes today’s look at the Pym Tank Convention Exclusives! If you’re interested, be sure to search for a 2017 Winter WizKids Open event and register soon on the WizKids Info Network! Happy holidays from all of us here at WizKids, to all of you!