Welcome back as we preview another character from our upcoming Teenage Mutant Ninja Turtles HeroClix:  Shredder’s Return Gravity Feed!  Today we present to you a recurring foe of the Teenage Mutant Ninja Turtles and the Timestress Renet Tilley.  It’s the former apprentice to Lord Simultaneous, Savanti Alfonso Juanito Geriero Santiago Romero (but you can call him Savanti Romero for brevity’s sake)! 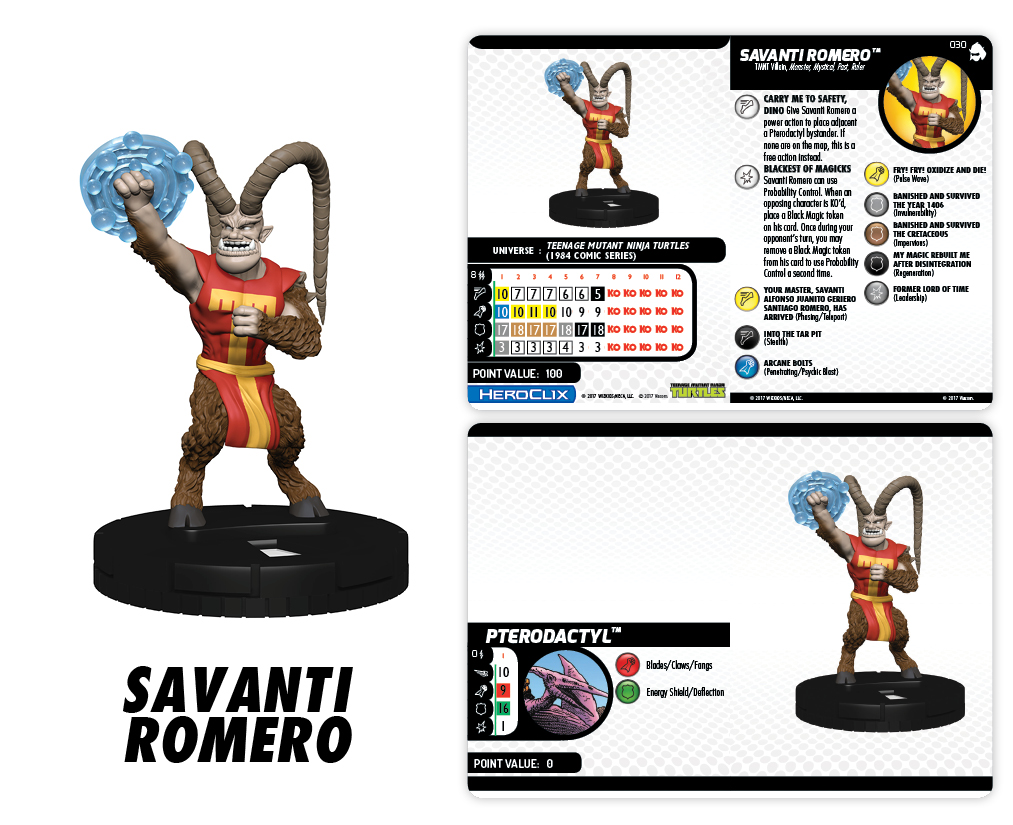 With a sculpt and dial design based on his appearances in the 1984 Mirage Comics run, Savanti Romero comes in at 100 points with the standard combat symbols on his dial and can shoot two targets up to 8 squares away.  Two special powers highlight Savanti Romero’s dial, one in his speed slot and the other in his damage slot.  His speed special power, Carry Me To Safety, Dino, lets him take a power action to place a Pterodactyl bystander adjacent to him.  However, if there are no Pterodactyl bystanders on the map, Savanti Romero can place one as a free action instead.

The Pterodactyl is a flyer with a speed value of 10 and an attack of 9.  It has a base damage of 1 but comes with Blades/Claws/Fangs.  The Pterodactyl also has a printed defense of 16 that’s backed by Energy Shield/Deflection, making it a bystander you’ll want to carefully approach if one is across the map from you!  The Pterodactyl is a great expendable ally to block lines of fire to Savanti Romero, carry him around the battlefield, or potentially land a big hit on an opposing character.

Both Carry Me To Safety, Dino and Blackest of Magicks initially appear on Savanti Romero’s dial on his second click.  The rest of Savanti Romero’s dial features an array of standard powers, starting with Phasing/Teleport, Penetrating/Psychic Blast, Invulnerability and Leadership and ending with Stealth and Regeneration.

Although Savanti Romero has no move-and-attack powers, he still packs quite a punch with a fairly consistent set of damage and attack values that are backed by a short mid-dial run of Pulse Wave.  Savanti Romero can take a hit as well as he can give one too, thanks to Invulnerability and Impervious dominating the length of his dial.

Lastly, for themed team building, Savanti Romero has the following keywords to build with:  TMNT Villain, Monster, Mystical, Past and Ruler.

Thanks for reading!  Be sure to visit the WizKids Info Network to find Teenage Mutant Ninja Turtles HeroClix: Shredder’s Return Gravity Feeds at local game stores near you.  Until then, may all your Probability Controls be ever in your favor!