Greetings, HeroClix fans! Welcome to another peek into the future, as we take a gander at one of the upcoming 2017 Winter WizKids Open Convention Exclusive Figures. Today, we’ve got the sometimes pint-sized, but this time giant-sized, Hank Pym, Giant-Man!

Giant-Man is a Colossal-sized figure, meaning he has access to Great Size, Giant Reach: 3, and Colossal Stamina. These abilities give him several effects starting with Improved Movement – Ignores Elevated, Hindering, and Outdoor Blocking Terrain, and he may move though squares adjacent to or occupied by opposing characters. He can attack characters up to 3 squares away with close attacks with Giant Reach, and Colossal Stamina allows him to be given a non-free action if he has two action tokens, but he will take 1 unavoidable damage, and won’t be able to clear action tokens after that round. He is also able to Carrycharacters that are a smaller in size than he is, which can be useful for positioning your force. 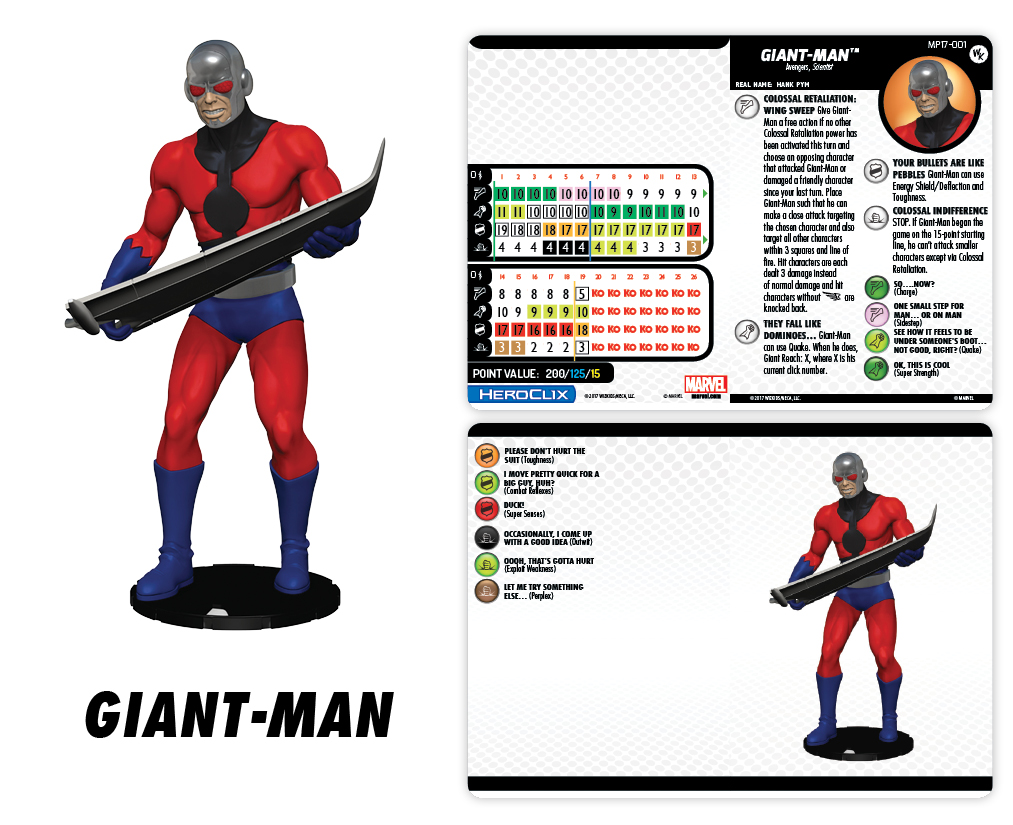 So – we’ve covered his size, now let’s take a closer look at Giant-Man’s card and dial. First thing’s first, at 19 clicks of life with his full value, Giant-Man is built to last. He’s also Indomitable, which means you can push him normally without taking any pushing damage. He’s playable at three point values of 200, 125, and 15, giving you options for having the big guy on your team. And then comes the bevy of standard powers – Charge, Sidestep, Quake, Super Strength, Toughness, Combat Reflexes, Super Senses, Outwit, Exploit Weakness, and Perplex. Truly, Giant-Man is a marvel, and that’s before we even start to look at his special powers!

There you have it! In all his colossal glory, Giant-Man will be available at the 2017 Winter WKO events. Be sure to register soon on the WizKids Info Network and find an event in your area! Keep a look out on HeroClix.com for more previews including Giant-Man’s Pym Pocket Tank and Pym Particle Tank! Until next time, may your days be merry and bright!