Hillside, NJ – May 31, 2022 – In 2014, Mike Elliott and Eric M. Lang brought their critically-acclaimed Dice Building Game design from Quarriors! to Marvel. The road since has had lots of fun and surprises. Now that the Marvel Dice Masters Dark Phoenix Saga set has released, we’re excited to begin previewing what’s next for Dice Masters. Beginning with Marvel Dice Masters Secret Wars we are introducing a new card frame that will allow the characters to pop while consolidating important game information and increasing readability. Let’s look at a few Avengers who may assemble while drafting. 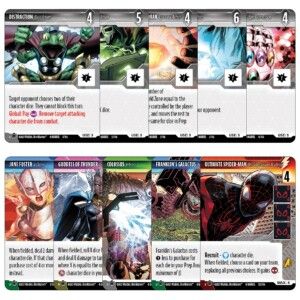 Thumbing through your draft pack you’ll notice that the top of the card features a color coding that corresponds to the card’s energy type and highlights the name and subtitle of the cards. Card names and subtitles are easier to read as the text is no longer against the art and a compressed typeface is used to be more space efficient so even lengthy character names and subtitles like Ultimate Spider-man: Brooklyn Visions Academy all fit on a single line.

The color coding at the top of the card will give energy types a deeper identity and help highlight the differences in cards. The energy and cost of a card is included in the color coding has moved to the right side of the card. The cost and energy type are no longer overlapping to make the information easier to process, especially with higher costing cards. When energy types are used in card texts or as part of the cost of using a global ability, the energy symbol will also appear as a white knockout in a circle of the corresponding color. Cards will be easier to read and spot at a glance with this modernized aesthetic. 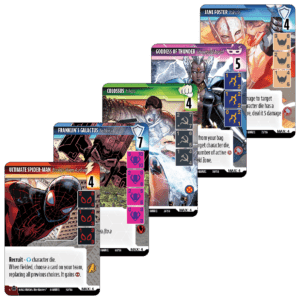 The right side of the card is now home to a ton of useful information. The energy faces of the die no longer appear on the card as it is largely redundant information. Instead, now only the die stats appear in a column with the highest level die face at the top. When looking for Avengers to trigger Falcon Take Flight’s Teamwatch ability, you’ll also find the Team Affiliation on the right side along with the Max Dice. All of this information together will make it easier when sorting and organizing your cards, whether as part of your collection or in the middle of a draft with your friends. 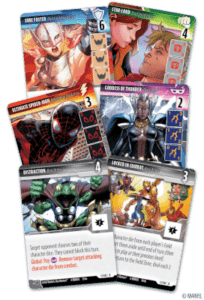 Rarity and set information have also been consolidated at the bottom of the card for reading at a glance. The cards now use C, U, R, S along with a color code to denote rarity. A set icon will accompany this information making it easier to process which cards are similar or different from one another. The card’s set number and total set size have also moved to the bottom of the card.

Don’t forget the artwork at the center of these new frames! Awesome art has always been a big part of what we wanted to show off on Dice Masters cards. We have fabulous art from our licensors and their talented artists. Here we’ve made the characters pop-out so they feel like they’re jumping out of the comics, and out of the dice onto your tabletop. Previously, cards feeling like they had depth was limited to foil cards, but the new frame helps deliver that feeling on EVERY card. The dice, text box, and the character’s name remain in the front because they are critical to the gameplay. We always want to make sure those elements are clear, legible, and high contrast. Spider-man Peter Parker highlights the flexibility of the new frame to expand the artwork when a card does not include any rules text.

In parallel with this, we’ve reimagined the packaging, which includes some new types of product. More on those later, but check out the look for yourself: 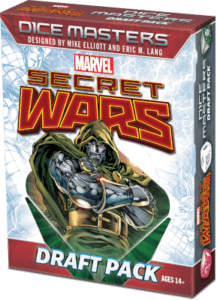 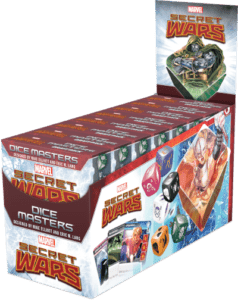 First and foremost, the characters POP straight out of the image on the die on the packaging, evoking the Dice Masters experience in a visually fun way. The aesthetic matches the one from the cards. It helps tie upcoming product together with a consistent and thoughtful look on a store’s (or collector’s) shelves.

The Origin Pack’s window display highlights the awesome looking dice, while one of the key characters is featured on the front left. The contents of each pack is thematic, and helps put players on the path to mastering the game. 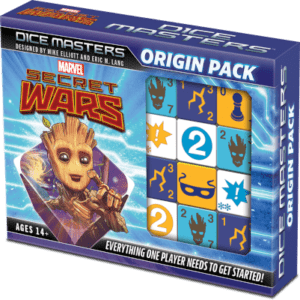 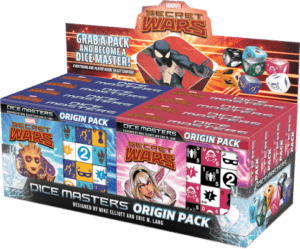 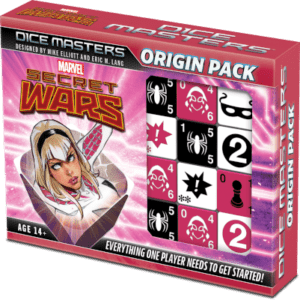 We’re glad to take years of internal reflection, fan feedback, and retailer critiques all into account when delivering this new look for Dice Masters. We’re looking forward to players getting to experience it firsthand later this year.