Update at bottom, takes into effect the Uncanny X-Men Rulebook

A: Basic Action Cards with “Draw Dice” effects— such as Gearing Up—can be used during either the Main Step or the Attack Step after blockers are assigned and before damage is dealt. The player would declare that they are using the action, draw two dice from their bag, roll them, and place the results in their reserve pool. Since both the Main Step and Attack Step happen after the Roll and Reroll Step, dice rolled using the Gearing Up BAC cannot be rerolled. 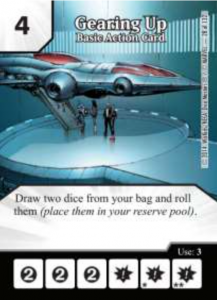 For characters with “Draw Dice” effects— such as Gambit Ace in the Hole—
are triggered when the requirement of the card effect is met. In the case of Gambit, Ace in the Hole, this is when this character is fielded. In this example, since fielding Gambit would occur during the Main Step (which happens after the Roll and Reroll Step), dice rolled using Gambit’s effect cannot be rerolled. 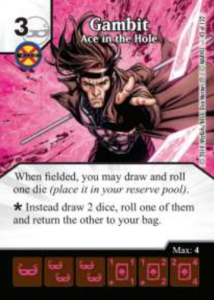 A: “Target character must attack” effects— such as the global abilities on Mr. Fantastic, Brilliant Scientist, and Phoenix, Ms. Psyche,— 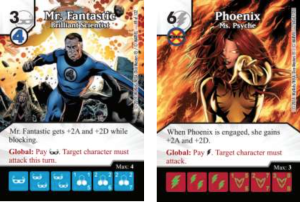 can be paid with their respective energy during the Main Step of your opponent’s turn to force a single target character die to attack this turn. For example, during an opponent’s Main Step, a player could use Mr. Fantastic, Brilliant Scientist’s global ability by paying one mask energy and choosing an opposing player’s active character die. That character would be forced to attack during that player’s attack step. Players can activate “target character must attack” effects during the Attack Step, but since attackers have already been assigned (during the Assign Attackers phase of the Attack Step) the opportunity for those characters to attack has already passed and the net result would be paying for an effect, choosing a target, and the effect of the Global Ability would do nothing.

Q: If a character with a game effect that is triggered by taking damage is KO’ed due to damage dealt in combat, does their game effect occur?

A: Yes, the character’s card effect will occur. As an example, Iron Man,
Playboy’s ability to deal 3 damage to one opposing character that is attacking or blocking each time he takes damage in the Attack Step would be triggered even if the damage he takes would cause him to be KO’d.
PLEASE NOTE: On Page 17 of the rulebook, there is an error. In the last sentence of the first paragraph, it states, “This will give Thor enough damage to knock out Iron Man before he can use his card text again.” This refers to the fact that Iron Man will not be in play in future turns to continue to take advantage of his ability – he still gets to use it on the turn he is KO’ed. 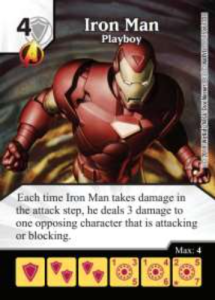 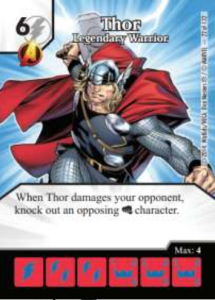 Q: Please explain game effects that occur when a character is “engaged” in combat. 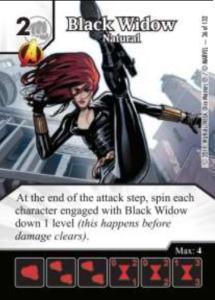 If Black Widow, Natural, would be KO’ed due to damage taken in the Assign Damage Step (or otherwise removed from combat before the end of the Attack Step), then she is no longer actively engaged with any opposing characters so her game
effect would not occur.

A: “When fielded” effects trigger at the time that a player moves that character into their Field Zone. In most instances, this occurs when a player pays a character’s fielding cost and moves the character from their Reserve Pool to their Field Zone. As an example, Hawkeye, Longbow’s ability allows him to deal his attack value to a target opposing character when he is fielded. 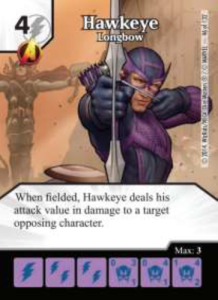 Some game effects will allow characters to be fielded in a more non-traditional fashion—such as Gambit, Le Diable Blanc.

If a character would be fielded from Gambit, Le Diable Blanc’s ability, any “when fielded” effects on those characters would activate. 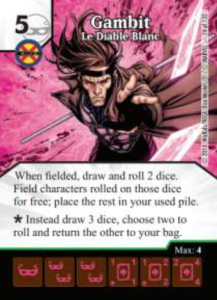 A: “While active” effects
are static effects that are considered to be in play as long as that character is in the Field Zone (NOTE: the Attack Zone is considered a
subset of the Field Zone—so “While active” effects are still active when a character is in the Attack Zone). These effects are not cumulative— i.e. the effects only occur once regardless of how many of that character is active in a player’s Field/Attack Zone (however, NOTE: if both players have the same character active, the effects will occur once for each player). As an example, Dr. Doom, Reed Richards’ Rival, modifies the Attack and Defense of all non-villain characters while he is active. This effect would only occur
once regardless of how many Dr. Doom dice a player has active, but would occur twice if two players had a Doctor Doom, Reed Richards’ Rival, active. 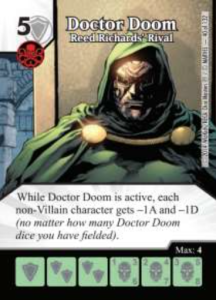 Q: Please explain the interaction/timing of “When fielded” and “While active” effects.

A: Characters are fielded when they are moved from the reserve pool to the field zone (by paying their fielding cost or through any special effect). An effect that occurs while the character is “active” is described as an effect that takes place when one or more of that card’s dice are in the field. See the Tournament Rules – Active and Fielded section in the rulebook on page 19. For example, Hawkeye, Longbow’s effect would activate only when you pay the character’s fielding cost and move the die from your reserve pool to the field. Doctor Doom, Reed Richards’ Rival’s effect would stay in effect as long as that character die is in your Field Zone.

For “When fielded” effects, you ask “Was the character fielded?”— If yes, the effect occurs immediately as they are fielded. This will happen simultaneously with any static effects already in the field (like Doctor Doom, Reed Richards’ Rival’s -1A and -1D). So, if a player fields Hawkeye on his Level 1 or 2 face (with 1 Defense), if there are no other defense modifiers on the field, it would play out as:

1) Hawkeye deals his attack value (which is being modified Dr. Doom by -1) to target
character.
2) Dr. Doom’s modifies Hawkeye’s Defense by -1, KO’ing Hawkeye. 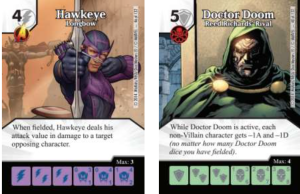 So, effectively, Hawkeye uses his effect just as he is KO’d. 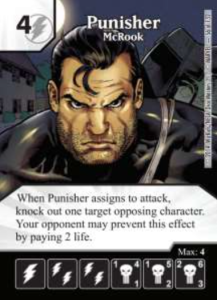 As an example of a “When blocking” effect, Beast, Mutate #666 allows you to draw a die and place it in your prep area when he blocks. If a player has multiple Beast, Mutate #666s in their Field Zone and blocks with more than one during an attack, that player will be able to draw a die for each Beast, #666 that is assigned to block. 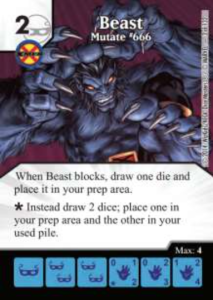 Q: What happens to a captured die if the capturing die is captured, rerolled, or otherwise changed such that the power is no longer available?

Q: Is a character considered to be blocked even if the blocker is removed from combat before damage is assigned? 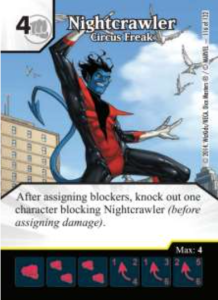 Q: Can you use a 2 generic energy die to both field characters and purchase a die in the same turn? To field two characters who each cost 1 to field?

A: Yes. In a situation where you roll Mask, 2, Sidekick, and Spider-Man Lv2 (field cost 1), you can buy a 2 cost Beast (with your Mask and 1 of your 2 generic energy) and field the Spider-Man (with the remainder of your 2 generic energy). You may take no actions in between and you may not pass priority to your opponent. The same would be true if you had rolled a 2 energy face on a die that has no 1 energy face. See page 7 of the rulebook under Purchasing a Die that reads, “For those dice (generic energy), any unused portion that is not immediately spent is lost. However, you can purchase multiple dice simultaneously to spend a generic die completely.” Also, under Field Characters on the same page, “As with purchasing dice, you can partially spend non-generic energy dice, and you can pay several fielding costs at once to fully spend a generic energy die.”

A. No, just once. For example, let’s look at the Force Beam BAC and Hulk, Jade Giant: 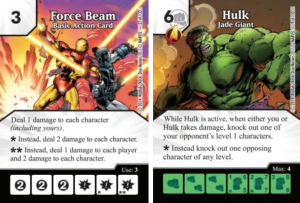 Suppose the following situation: Player A has a Force Beam Basic Action Die in their Reserve Pool on its double burst Action Face. Player B has a Hulk die in their Field Zone on its Level 3 face. Player A activates their Force Beam, which deals 1 damage to each player and 2 damage to each character. Player A and Player B will both be dealt 1 damage and all characters in both players’ Field Zones will be dealt 2 damage. As Player B will take damage and Player B’s Hulk will take damage, Hulk’s card effect of “While Hulk is active, when either you or Hulk takes damage, knock out one of your opponent’s level 1 characters” will trigger and Hulk will be able to knock out one of Player A’s level 1 characters (that were still in Field after being dealt 2 damage from the Force Beam). Hulk’s effect will only trigger once regardless of how many times the requirement for his effect is met. If any other source would then deal damage to Hulk’s controller or Hulk (like a second Force Beam were to be played), Hulk’s ability would trigger again.

Q: If I target a character with two separate effects that resolve simultaneously, and for opposite effect, what happens?

Q: If a Global Ability says I may only use it once per turn, can I use my copy and my opponent’s copy of the same ability?

A: The short answer is yes! It doesn’t matter if you have the same exact character (two Silver Surfer, Sky-Riders) as your opponent, or two different versions of the same character (Silverado and Sky-Rider). 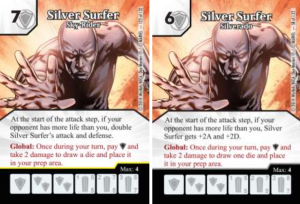 Q: Do Sidekicks moved to the field with Rally count as being fielded? Does Rally trigger Johnny Storm’s ability?

A: No, they are simply moved from one area to another. This is true for all cards that “move” or “swap” and do not specifically state that they field characters. They do not trigger Human Torch’s ability since that only activates when characters are fielded. 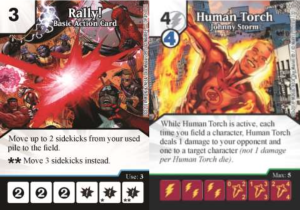 Q: If Angel attacks, is blocked, and then a player uses Distraction’s Global on him, does he deal 2 damage to the defending player still?

A: Yes. He was blocked, he was not knocked out, and therefore he deals the 2 damage. 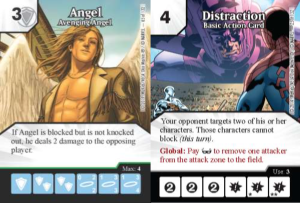 Q: Does “Swap” replace the character exactly where it is, meaning if the character was blocked, they would be replaced with a character from the Used Pile or Prep Area? Does this count as fielding a new character?

A: Yes, one die replaces the other; if it is blocked, the new character is also blocked. No, this does not count as fielding a new character. 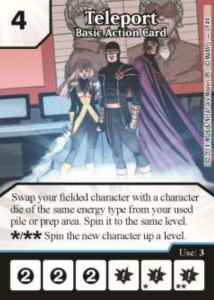 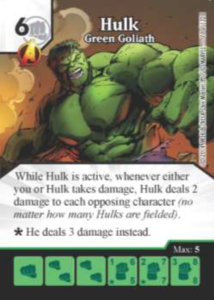 Q: Can you help me understand how to use Teamwork correctly?

A. If you had an Iron Man, two Thor, and a Hulk in play, each of them would get +2A and +2D. Teamwork identifies that you have 3 different Avengers in play and it doesn’t matter how many copies of those dice are in play. The bonus of Teamwork occurs when played, and doesn’t change if a different number of characters are fielded after it is used. 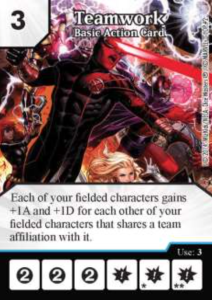 Q: Can you help me understand how Storm, Weather Witch’s Global Ability interacts with Imprisoned?

A. The short answer is: it doesn’t. Imprisoned doesn’t use the word “target.” Target implies a set number of targets, not a grouping that meets a requirement (as Imprisoned has you select). 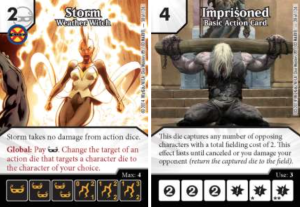