Tarot Cards for the Competitive Player

“It’s exactly what you think, mutant. You step into the arena, knowing the full measure of what you’re fighting for… You face your enemy, who wants nothing less than your total annihilation… you look them in the eye, steady yourself… And then… And then… You raise. Your. SWORD.”
-Opal Luna Saturnyne

Marvel HeroClix: X of Swords Storyline Organized Play is an all-new in-store play experience! This release brings exciting possibilities to casual and competitive settings. In case you missed it, check out the article about how Tarot Cards work here. This will give you the basic knowledge that you need to understand the mechanic properly, as well as giving you interesting ideas about how to use them outside of tournament play!

This article focuses on the tournament play implications for HeroClix’s first ever Tarot Cards. First and most importantly, these cards are legal for constructed HeroClix play (Modern Age, Silver Age, and more). How should a HeroClix player approach adding Tarot Cards to their strategy toolbox? Is it better to add Tarot Cards to a team you already enjoy, or build something entirely fresh based on new opportunities?

Competitive players LOVE certainty. They use Perplex, Probability Control, die replacement, and other tools to shrink the variance of their HeroClix match. The word “random” may scare some players, but that’s ok! You’ll get to choose precisely which of the 78 Tarot Cards go on your HeroClix team. You can ensure each card that is drawn on your turn has an impact on the plan you’ve made for your team, or the plan you’ve made to stop your opponent’s team. With practice, you’ll learn to position your team to capitalize on any possible draw from the Tarot Deck just like you would to react to your opponent’s rolls.

As a reminder from the previous article:

When you begin building the Tarot Deck for your team, you’ll want to look at your team’s play style. Are you going to be aggressive? Passive? Reactive? Maybe a mix? Once you’ve decided, you can then move into card selection. Check out what powers you have an abundance of on your team for each slot on the dial. You may find that you are very diverse in a particular power slot (i.e. all of your figures have different Defense powers). That’s okay! Then you will want to prioritize the power on your most important piece, most expensive dial, or use the Queen or King of that suit to get the more generic effect.

We figured that giving a full example of how a Modern Age Team might utilize the Tarot Cards would be a great way to let everyone experience the mechanic at a base level. Here is a basic X-Men theme team to get us started!

Alright! Now that we have got the build out of the way, let’s start looking at each power slot and see what cards will benefit us the most (as well as preview a few cards for everyone)! We will be building the full 12 card deck.

This is where we start to count what powers are utilized most often and begin selection based on that! Mimic is on the team, so we can assume that he will always have any power that the rest of the team has access to. Admittedly, he complicates things but also makes for an awesome practical example.

This team has great optionality among Sidestep, Running Shot, Charge, and Stealth in the Speed slot, so the Tarot Cards corresponding to those cards are the most interesting to us. The 9 of Pentacles immediately jumps out as something that we would want to have.

By using the Page of Pentacles, characters with Stealth get some INCREDIBLE mobility! It’s an awesome intersection of defense and repositioning. 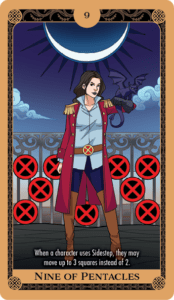 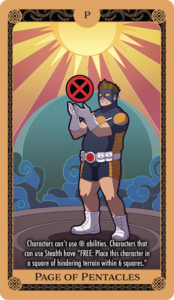 This team uses a narrow set of Attack powers, but we do have Penetrating/Psychic Blast, Telekinesis, and Energy Explosion. Reviewing the corresponding Swords suited cards leads to wanting the Seven of Swords and the Knight of Swords. The Seven is a great addition to our Penetrating/Psychic Blast pieces by giving a little bit of extra damage, while the Knight can really help keep Venom Magneto from having action tokens! 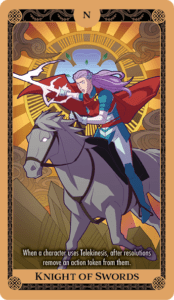 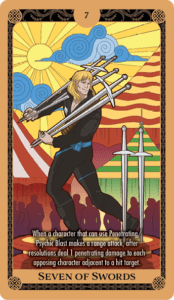 This is the lowest hanging fruit on the team. Most of the force has Super Senses on its dial, so it only makes sense (pun absolutely intended) that we would choose to go with the Ace of Cups! The second option isn’t quite so obvious, but it is an option that helps your team without helping your opponent too significantly. A team like this doesn’t do a bunch of damage in one big attack, so the Queen of Cups is a natural fit to help you stay alive, while also not hurting your offense too much! 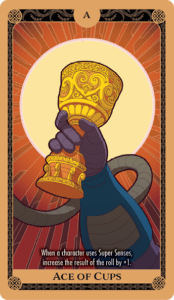 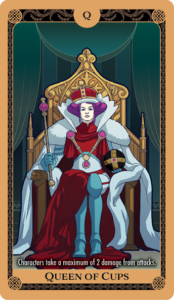 Onto the Wands! The damage powers that we have the most of are Probability Control (especially when factoring in that we are a theme team) and Leadership. The Queen of Wands is a wonderful card to add here. It will function much like the Ace of Cups, by adding to the Super Senses rolls of the team! Then, we will also be looking to use the large amount of Probability Control on the team by making it even better with the Six of Wands! 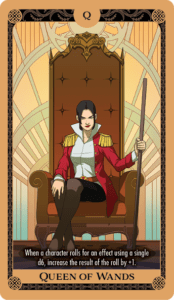 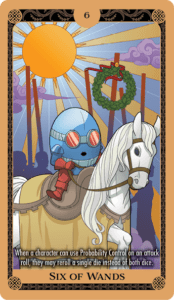 Finally, we are on the hardest part of the deck building. We have 14 options here that all could be suitable for the team in some way. First thing that we can look to use is The Fool. We don’t have any equipment here, so this is a natural choice. The next one that we would look to would be The High Priestess. While this will help the opponent hit their attack rolls, it can really help our odds of hitting that Super Senses. The third of our four options will be The Emperor. Choosing to make Mimic into a Colossal with SAFEGUARD: Outwit is a great thing to do! Lastly, we can utilize The Devil to punish our opponents when they roll too well! We don’t have to be attacking every turn, so there is no issue with waiting this card out. 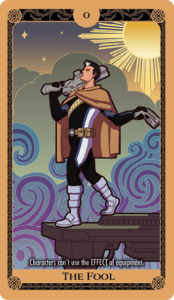 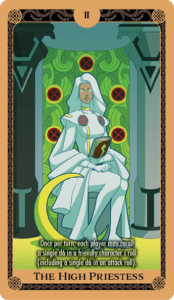 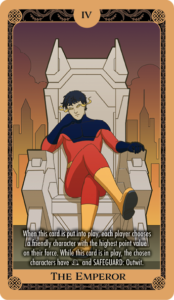 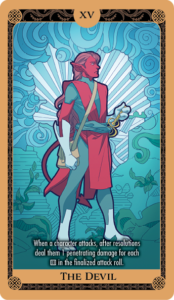 Bringing it All Together:

There a lot of ways to optimize your Tarot Deck or analyze how your team will benefit from it. This article might just be the tip of the iceberg.

One of the things to consider is how many clicks a given ability appears on across your entire team. Super Senses is incredibly prevalent in the team we’re considering—it appears on a whopping 15 clicks! That means that not only will the Ace of Cups nearly always come in handy, but the Queen of Cups will help mitigate the impact of your opponent’s successful attacks.

The Queen of Wands was mentioned as also bolstering your Super Senses, but there are multiple clicks of Impervious and Leadership that it will strengthen as well. In a really sneaky way, The Devil also has awesome synergy with Super Senses since you’ll have an opportunity to Evade an opposing attack that deals your opponent damage!

Including The Fool because so many teams take advantage of equipment is attempting to predict the metagame. If your local group all decides to play The Fool and skip using equipment, you could simply skip putting it into your Tarot Deck and get to access your other effects more frequently. Is that a “Galaxy Brain” move? You decide!

Finally, any counting of which powers appear frequently on this team is an underestimate. Mimic could copy Leadership, Outwit, Perplex, Telekinesis, and more. Krakoan Revival will give you additional chances to utilize key powers.

Tarot Cards are certain to be a fun addition to the current tournament scene. They really add a level of variety and unpredictability into the game that we haven’t seen before. Keep an eye out for a store near you that will be hosting the X of Swords Storyline OP and be sure to attend! Thanks for reading everyone!

The Marvel HeroClix: X of Swords Storyline Organized Play Event Series will kick off July of 2022 and runs for three months with one event per month. Each event will have unique prize figures as well as Tarot Card participation prizes so players can build upon and complete their Tarot Card collection!

Each month will also feature a different Marvel HeroClix: X of Swords Storyline Organized Play booster bricks with exclusive content only found in that month’s booster packs. Players will use these boosters— along with the Tarot Cards provided each month— to face their opponents in Battle Royales where they can gain Tournament Points. The players with the most Tournament Points at the end of the series will be crowned the Marvel HeroClix: X of Swords Champion and awarded their choice of two exclusive Grand Prize figures— Apocalypse or Genesis— with the second place player receiving the remaining figure.