The cards have determined the next contest.
—Opal Luna Saturnyne

In 2020, Marvel rolled out the groundbreaking X of Swords storyline in their X-Men titles, pulling us into the past to trace the history of the mutant island of Okkara. Thousands of years ago, a great war split Okkara apart, forming the twin islands Krakoa and Arakko. This sundering serves as the prologue to a cataclysmic confrontation between the two nations, a grand contest between Krakoa and Arrako and the ten mutants chosen by each side to fight for their nation as “Swordbearers.”

We were extremely excited to bring this incredible storyline to HeroClix, knowing it would serve as a fantastic basis for a standard HeroClix booster set and an amazing theme for a storyline organized play event series! When planning for the storyline event series, there was one major element that immediately jumped out to our design team as essential to capturing the feel of the comic event— Saturnyne’s deck of Tarot cards.

In X of Swords, Saturnyne draws from her Tarot deck to determine the unique challenges that the Swordbearers from Krakoa and Arakko must face in their head-to-head battles. From an artistic standpoint, we were excited to reimagine a full Tarot deck in the context of the Marvel Universe. Each Marvel HeroClix Tarot Card features custom art that marries the symbolic imagery and deep meaning of the Tarot with our favorite X-Men characters. From a gameplay perspective, Tarot Cards provide a unique opportunity to add a dynamic element to HeroClix— much like the unique challenges that the Swordbearers must face in each of Saturnyne’s contests. 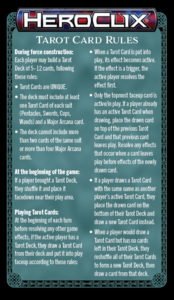 A full Tarot deck has 78 cards. These cards are divided into four suits— Pentacles, Swords, Cups, Wands—along with a host of “Major Arcana” cards. There are fourteen of each suited card with ten numbered cards of Ace through 10 and four “court” cards— the Page, the Knight, the Queen, and the King. The twenty-two Major Arcana cards are not associated with any suit, but each have their own unique name and meaning.

In mapping these cards to HeroClix, the four suits lined up nicely with our four combat types— Speed, Attack, Defense, Damage. There are 12 standard powers per combat type, so this allowed us to map each standard power onto the suited cards Ace through 10 as well as the Page and the Knight. The two remaining cards in the suit— the Queen and the King— were given dynamic effects that are not tied to a specific standard power but are themed to their respective combat type.

The twenty-two Major Arcana cards were each given special effects, each themed to the name or meaning of the specific Tarot Card and what it may represent in HeroClix.

How to Play Tarot Cards

Players will be able to find the Tarot Card rules card (shown above) in the Marvel HeroClix: X of Swords Miniatures Game or pick one up at their local game/hobby store during the Month 1 event of the HeroClix X of Swords Storyline Organized Play Event series (go to www.win.wizkids.com to search for events near you).

In HeroClix, the winds of fortune often lie in the roll of the dice. For our design team, it was fun to add the randomness of a draw of a card to the game. With players each having their own Tarot Deck, there will be multiple effects in play… and depending on what combination of cards there may be, players may choose (or be forced to) pivot their strategy mid-game— perhaps to avoid a pitfall, or perhaps to take advantage of an opportunity. The right combination of Tarot Cards at the right time can shift the momentum of a game!

Players are required to build their decks to include at a minimum one of each suit as well as a Major Arcana card. Each card is considered UNIQUE, so players will not be able to play multiple of the same card in their decks. In building their Tarot Decks, players may choose to optimize their deck to support their team… or to throw some monkey wrenches into their opponent’s strategy! However, while players can “stack their deck” in their favor, Tarot Cards are global game effects (meaning they affect all characters on the map), so players will need to consider that an opponent may benefit from their own effects and they themselves may be on the receiving end of negative effects.

The contests continue with the speed of a deadly shuffle of the cards.

The many possibilities of Tarot Cards

Outside of tournament play, we are very excited that the HeroClix X of Swords Tarot Cards will also provide players with plenty of variations in game play for use in home games. There are literally thousands of ways you can use Tarot Cards to enhance or add a special twist to your next HeroClix game… be creative and most of all have fun! Here are just a few of the many possibilities: 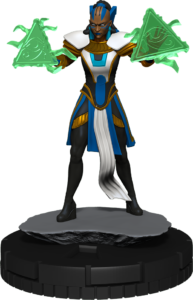 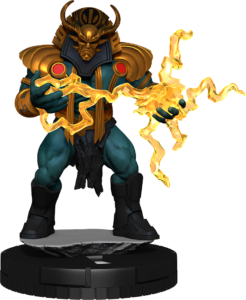 The Marvel HeroClix: X of Swords Storyline Organized Play Event Series will kick off July of 2022 and runs for three months with one event per month. Each event will have unique prize figures as well as Tarot Card participation prizes so players can build upon and complete their Tarot Card collection!

Each month will also feature different Marvel HeroClix: X of Swords Storyline Organized Play booster bricks with exclusive content only found in that month’s booster packs. Players will use these boosters— along with the Tarot Cards provided each month— to face their opponents in Battle Royales where they can gain Tournament Points. The players with the most Tournament Points at the end of the series will be crowned the Marvel HeroClix: X of Swords Champion and awarded their choice of two exclusive Grand Prize figures— Apocalypse or Genesis— with the second-place player receiving the remaining figure.