Let’s take a look at some exclusive previews from the Independents Faction Pack starting with the Ferengi Starship (D’Kora Class). 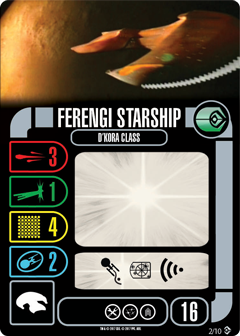 The Ferengi Starship is a D’Kora class ship that is a staple of the Ferengi fleet. This ship has a moderate 3 Primary Weapon Value, 1 Agility, 4 Hull, and 2 Shields, all for the new low cost of 16 SP. The Action Bar contains an Evade, Target Lock and Scan Actions. The Upgrade Bar allows you to customize your ship by adding 1 Tech Upgrade, 1 Weapon Upgrade, and 1 Crew Upgrade. As the generic version, this ship does not have any special abilities but at such a low cost you can spend your extra points on powerful upgrades instead. 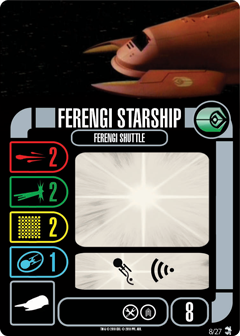 Shuttles have also been a powerful addition to Star Trek: Attack Wing. Here we look at the generic version of the Ferengi Shuttle.  For only 8 SP you get a ship with a 2 Primary Weapon Value, 2 Agility, 2 Hull, and 1 Shield. This ship also features the Evade and Scan Actions on the Action Bar, and you can upgrade this shuttle with 1 Tech Upgrade and 1 Crew Upgrade. While tiny and fragile, these small shuttles can pack a mighty punch if equipped properly. You just never know what a crafty Ferengi could be smuggling and that is what makes them so dangerous. 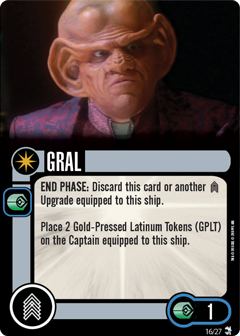 As we saw previously, the Wave 2 Card Packs contain Ferengi cards that allow you to accumulate and then spend Gold-Pressed Latinum Tokens (GPLT) on various special abilities and card effects. Gral is one of many cards that will provide a way to generate these valuable tokens. For 1 SP you may add Gral to your ship as a Crew Upgrade. During the End Phase you may discard this card or another Crew Upgrade equipped to this ship. Then, place 2 Gold-Pressed Latinum Tokens (GPLT) on the Captain equipped to this ship. 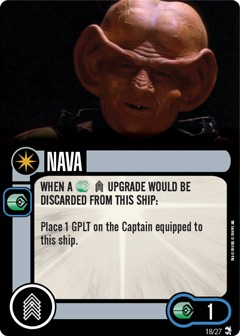 Complimenting Gral perfectly is Nava, another 1 SP Crew Upgrade. Whenever a Ferengi Crew Upgrade would be discarded from this ship place 1 GPLT on the Captain equipped to this ship. As you can see Ferengi admire the pursuit of wealth above all else. Between Gral and Nava your ship should have plenty of GPLT to fuel your way to victory! 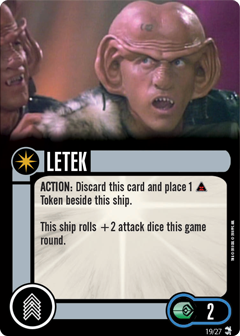 While not known for their strength in battle, sometimes even the Ferengi must be ready to fight. Letek is a 2 SP Crew Upgrade that adds +2 attack dice to your ship this game round. You must discard Letek and place 1 Auxiliary Power Token next to your ship in order to use this ability. Keep in mind, even when forced to fight, combined with Nava you can still collect 1 GPLT after discarding Letek and have a powerful boost to your attack! 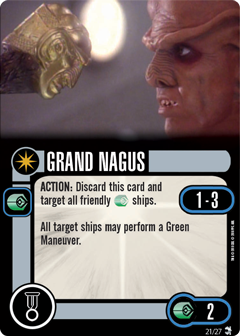 In terms of Elite Talent Upgrades, the Ferengi have returned with the Grand Nagus. Last seen in the Quark’s Treasure Expansion Pack, Grand Nagus now only costs 2 SP. As an Action you may discard this card and target all friendly Ferengi Ships within Range 1-3. All targeted ships may perform a Green Maneuver. When flying an all Ferengi fleet, the Grand Nagus brings the opportunity to give your entire fleet superior maneuverability at a low cost. 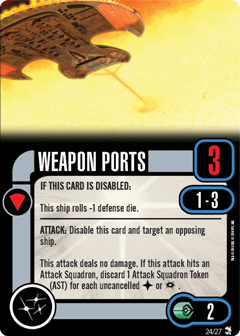 Weapon Ports is perhaps one the greatest weapons the Ferengi have to offer. Last seen in the Nunk’s Marauder Blind Booster Pack, Weapons Ports is the most effective way to take down enemy Attack Squadrons. Now Weapon Ports is back and half the cost at only 2 SP. As an Attack you may disable this card and target an opposing ship within Range 1-3 in your Primary Firing Arc with 3 Attack dice. This attack does no damage. If this attack hits an Attack Squadron, discard 1 Attack Squadron Token (AST) for each uncancelled Hit or Critical Hit. This Upgrade has the potential to remove 3 AST’s in one attack! If anything is going to keep Attack Squadrons at bay it is Weapon Ports.  See your local Ferengi weapons dealer for more details! 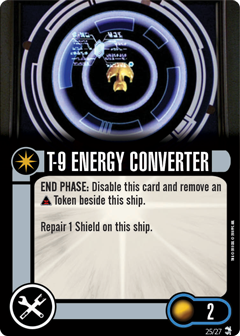 In order to ensure their survival the Ferengi have been known to purchase the best technology money can buy. One such purchase is the T-9 Energy Converter. This Tech Upgrade is Independents faction, during the end phase you may disable this card, remove an Auxiliary Power Token from beside your ship and repair a shield all for only 2 SP. Repairing Shields can be very powerful, especially when combined with removing Auxiliary Power Tokens. Once you remove your disabled token from this Upgrade you can start the process all over again. 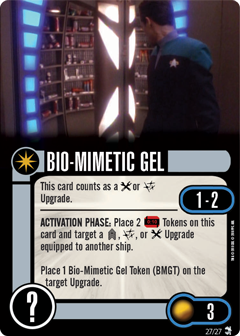 The last upgrade we will preview is unlike anything we have seen before. Bio-Mimetic Gel counts as either a Tech or Weapon Upgrade. During the Activation Phase place 2 Time Tokens on this card and target a Crew, Weapon or Tech Upgrade equipped to another ship within Range 1-2. Place 1 Bio-Mimetic Gel Token (BMGT) on the target Upgrade. 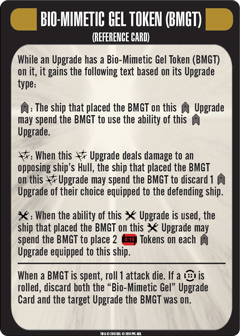 When a BMGT is spent, roll 1 attack die. If a Battle Stations result is rolled, discard both the “Bio-mimetic Gel” Upgrade Card and the target Upgrade the BMGT was on.

Bio Mimetic Gel opens up a whole new world of options to either buff your own fleet or cripple your opponent. Will you find the best way to use this powerful upgrade before it can be used against you?

Last but not least, the Independents Faction Pack adds new Mission Scenarios as a way to challenge your skills reenacting battles from Star Trek lore.

During set up, one of three set ups will occur depending on the results of Part One.

Once fleets are built, players have deployed their fleets, and set up the Obstacle Tokens, there are a number of special rules players will have to play by during this mission.

First, all Ferengi Captains on ships controlled by the Ferengi Player gain the following ability:

While this ability is costly, it can be the different between profit and loss and the Ferengi always want to turn a profit…

Additionally, Ferengi ships never actually get destroyed during this mission. The Federation have simply come to reclaim their property and apprehend the thieves!

The Ferengi Player wins if at least 1 of their ships leaves the play area via the N edge.

The Federation Player wins if all of the Ferengi Player’s ships are Disabled. 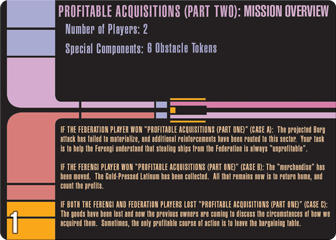 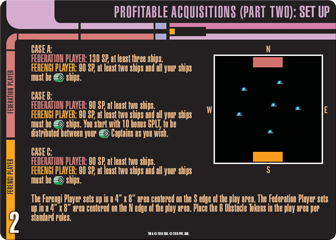 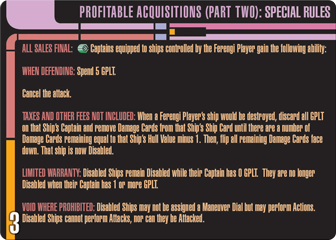 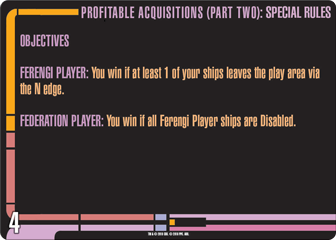 The Independents Faction Pack brings fresh new and exciting content to Star Trek: Attack Wing with new formatting and iconography that will streamline and improve gameplay. Players will enjoy these thematic packs and enjoy finding new and creative ways to build powerful fleets of ships to achieve victory.

Contact your local friendly game store to let them know that you want to order this new Star Trek: Attack Wing Faction Pack. All of this exciting content is included in the Independents Faction Pack for the low MSRP of $29.99.  Be sure reserve your pack today and keep an eye out for other new products coming soon!