While carefully traversing the treacherous terrain of the Briar Patch your ships’ sensors start picking up readings of powerful energy fluctuations directly in front of your fleet. However, when brought on screen, there’s absolutely nothing there. Just as your crew starts to run more in depth diagnostics an enemy fleet appears across from you behind where the sensors indicate the presence of energy fluctuations. You must fend off your enemies, but proceed with caution, the energy fluctuations may be something much more significant than they appear to be! Will you be able to defeat your enemies? Will you be able to traverse the battlefield without being affected by the energy fluctuations? Find out in this exhilarating mission!

To play this scenario you will need:

No ship may be equipped with a mine upgrade (Cloaked Mines, Antimatter Mines, etc.)

Afterwards, the players place their ships in their starting areas according to the normal Set-Up rules for two players.

Each objective token acts as a normal obstacle and represents a different type of cloaked trap that can be dangerous for any ships that end their movement near it. A ship that ends its movement within range 1 of an objective token may perform the following action to attempt to scan and disable the trap:

ACTION: Roll a number of defense dice equal to you current Agility Value. If you roll at least 1 Evade result, the trap is considered disarmed. Place the objective token on your side of the play area face down. You may peek at this objective token, but you do not have to share the information with the other player.

NOTE: If a ship ends its movement within range 1 of several traps, it can only attempt to disarm one of them.

END OF THE MISSION

The mission ends when:

BONUS – Each trap a player disarms is worth +10 Fleet Points.

Every player who shows up and plays in this event gets a resource as a participation prize. The resource for Trap Travesty is Long-Range Probe. At the start of the game, place 3 Mission Tokens on this card.

PLANNING PHASE: Once per game round, place 1 Mission Token from this card onto the play area within Range 1-3 of one of your ships.

PLANNING PHASE: Target an opposing ship within Range 1-2 of one of your Long-Range Probes and remove that Long-Range Probe from the play area. This game round, the target ship must plan its Maneuver first, face up, and it cannot be changed after it is set. 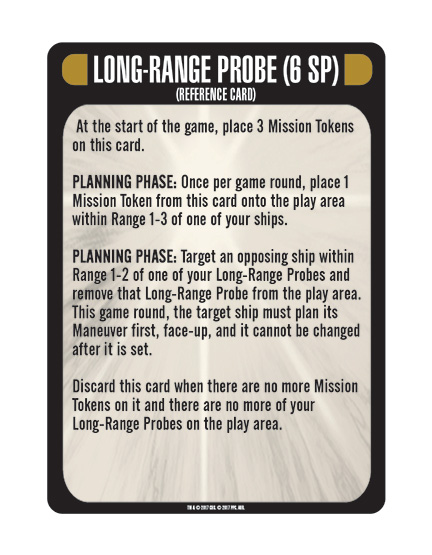 Each prize pack contains a unique prize card with brand new content as well as flex prizes of popular cards from the past with updated text and formatting.

The prizes for Trap Travesty are Photonic Cannon and Romulan Pilot.

Photonic Cannon is a Federation Weapon Upgrade that costs 10 SP. When attacking you may make a 10 die attack at Range 3 by spending this ship’s Target Lock and removing this card from play. This ship then suffers 2 Hit results to its Hull. This Weapon can only be fired out of this ship’s Primary Firing Arc.

While costly, Photonic Cannon is a powerful new weapon that can put an end to the battle once and for all with one devastating blast! Your timing will have to be perfect to avoid attack cancellation but if done at the right time, it will bring your enemies to their knees. 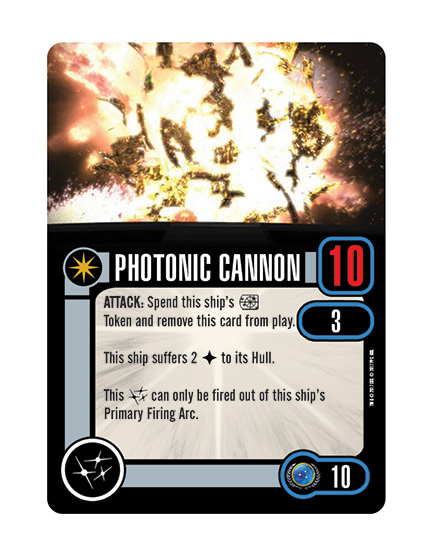 Romulan Pilot is the Flex prize. Most players will be familiar with Romulan Pilot, a popular favorite to gain a little extra movement. As a Free Action you may discard this card to place a Scan Token beside this ship and then that ship may perform a Green Maneuver. The new formatting for this card makes it easier to understand and avoids confusion by using less words to explain the cards effects with the new iconography. 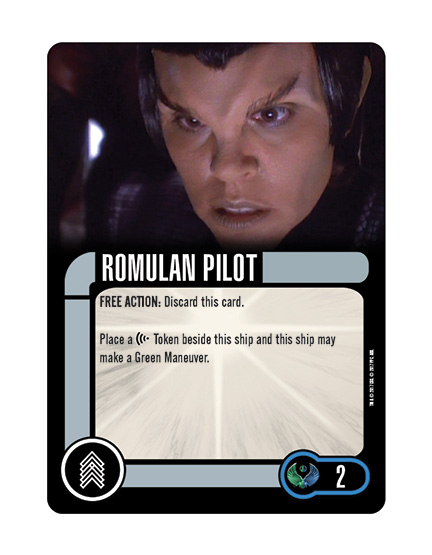 Don’t miss the chance to play in this exciting event. Contact your local venue and reserve your spot for this Organized Play Event. Visit WizKids at WizKids.com/Attack Wing for additional information about Star Trek: Attack Wing or go to the WizKids Info Network to find a local game store near you at win.wizkids.com.