To kick of this preview, we’re going to show off the last two Squadron Upgrades from the Federation Attack Squadron Card Pack, both of which happen to be different Defensive Maneuvers! 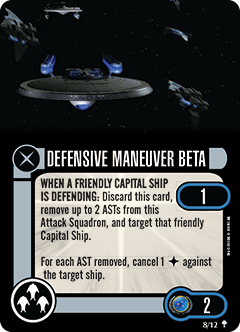 Next up, we have Defensive Maneuver Theta which is a 3 SP Federation Squadron Upgrade that, like Defense Maneuver Beta, is a one-per-ship unique card. This card, again like Defensive Maneuver Beta, allows you to protect you Capital Ships within Range 1 by giving this Attack Squadron and all friendly Capital Ships an Evade Token at the cost of discarding this card. If you’re able to clump a few Capital Ships together with this Attack Squadron, this Upgrade simply pays for itself with all the damage it’ll cancel with all those Evade Tokens! 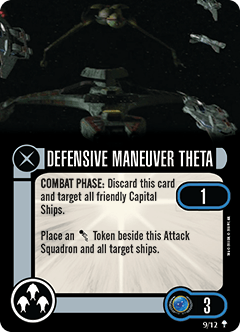 Now, we move onto five more cards from the Hirogen Warship Card Pack starting with none other than Idrin, the Alpha Hirogen! Idrin is a 2 SP, unique, Independents Captain Card with a Captain Skill of 3 and 1 Elite Talent Upgrade Slot! Idrin counts as a Hirogen Captain (important for rules text of other cards in this card pack!) and has an ability that can be activated at the start of the Activation Phase by placing 2 Tokens on him. If you use this ability, you get to remove 1 Disabled Token or up to 2 Time Tokens from a Tech or Weapon Upgrade equipped to his ship. Every other turn, Idrin lets you keep one of your Tech or Weapon Upgrades that’s down for the count to be ready and able to activate again! 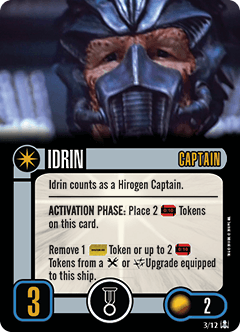 Donik, a young Hirogen technician, is a 2 SP, unique, Independents Crew Upgrade that can only be equipped to a Hirogen Warship. A Hirogen Warship with Donik equipped to it goes into stealth mode and cannot be targeted by Weapon Upgrades that would be fired through a Secondary Firing Arc. For 2 SP, Donik makes or breaks games by thwarting your opponent’s strategy to use a hefty weapon while out of position. 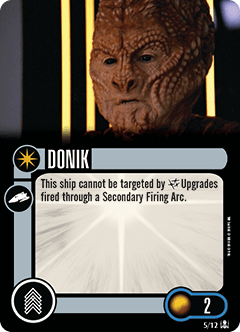 The generic Beta Hirogen is next up! The Beta Hirogen is a 3 SP, one-per-ship unique, Independents Crew Upgrade that statically increases the Captain Skill of the Captain of the ship he’s equipped to by 1. In addition to that fantastic bump, the Beta Hirogen also has an ability that allows a ship to get 2 Scan Tokens for the price of 1 when his ship performs a Scan Action! 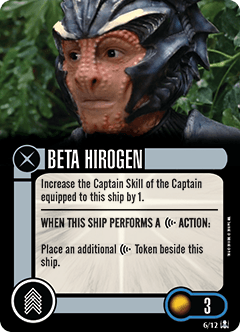 The Hirogen are well known hunters who often hunt with a solitary ship against a solitary prey. The Lone Hunt Elite Talent Upgrade captures this facet of these hunters fantastically. This card is 3 SP, not unique, and hails from the Independents Faction. As the name suggests, when the ship this card is on is attacking and there are no friendly ships within Range 1-2, this ship gets to roll +1 attack die for that attack. For a meager cost, the Hirogen can employ their favorite hunting tactics and get a great offensive bonus for doing so! 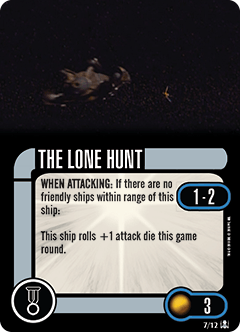 Last but not least we have a reprint of a Weapon Upgrade called Subnucleonic Beams that, if not equipped to a Hirogen Warship, costs +5 SP. This weapon, which formerly costs 5 SP, is now 3 SP, is not unique, and is an Independents Upgrade. This weapon grants its ship the ability to make an attack with 4 attack dice at Range 1-2 by placing 2 Time Tokens on it. For each uncancelled Hit or Critical Hit, you can disable a Crew Upgrade equipped to the defending ship (max 3). Not only do you get to make an attack with the same number of attack dice as this ship’s Primary Weapon Value, but you get to disrupt up to 3 of your opponents Crew Upgrade that are likely vital to their strategy all for only 3 SP! 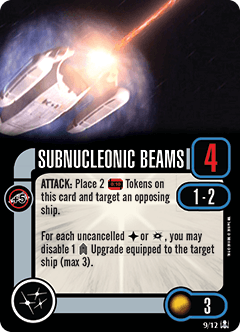 That’s all for today folks! These new Wave 4 Card Packs introduce some really exciting and interesting new ways to play the Federation Attack Squadrons and Hirogen Warships and we truly hope you enjoy playing with them as much as we enjoyed creating them for you!

Be sure to contact your local friendly game store to let them know that you want to order the new Star Trek: Attack Wing Wave 4 Card Packs. All this exciting content and more is included in each Card Pack for the low MSRP of $9.99.  Be sure reserve your packs today and keep an eye out for other new products coming soon!