WizKids is excited to announce the third wave of the popular Card Packs for Star Trek: Attack Wing, releasing in March 2018. Card Packs focus on a particular ship and contain fun thematic cards with a new, efficient point-cost system that will add a new level of depth and excitement to gameplay. In addition, the new formatting and iconography for cards will now allow players to easily identify game effects such as triggers, durations, range, and firing arc.

The Dominion Starship is a generic Jem’Hadar Attack Ship that has a 3 Primary Weapon Value, 2 Agility Value, 3 Hull Value and 2 Shield Value for 13 SP. The Action Bar contains the Evade, Target Lock, Scan, and Battle Stations Actions. The Upgrade Bar allows for you to customize your ship by adding 1 Tech Upgrade, 1 Weapon Upgrade, and 1 Crew Upgrade. While the Jem’Hadar Attack Ships are a bit on the fragile side, they can still pack quite a wallop. At only 13 SP each the Dominion can swarm their enemies with these cheap yet effective attack ships. 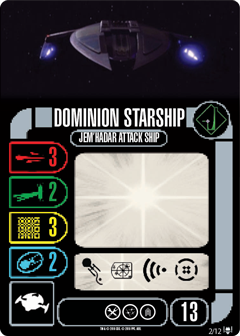 Last seen in the Deep Space 9 Convention Exclusive Card & Token Pack, Elim Garak returns at a new low cost with a brand-new ability. This time, Elim Garak punishes any enemy ship that shares a faction with his ship or himself by ensuring that at least 1 hit or critical hit result cannot be cancelled. Elim Garak is a valuable crewmember to have when facing other Dominion ships in battle. For only 1 SP you can make sure that at least one damage you roll will always strike true! 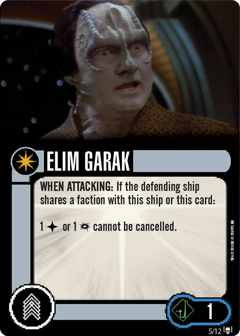 Another familiar returning crewmember is Seskal, last seen in the 3rd Wing Attack Ship Expnsion Pack. Seskal remains true to his original card but new formatting and iconography make this card easier to use and understand. During the combat phase if all this ship’s Shields have been destroyed you may disable this card to add +2 attack dice whenever you attack this game round. At 4 SP, Seskal adds extra attack dice when you need it most. Just when you think you have the Dominion where you want them, they strike back with unexpected strength! 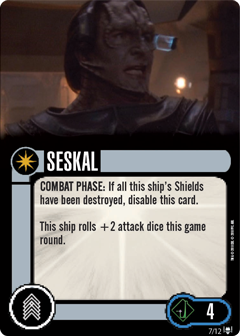 Perhaps you want more firepower but you don’t want to wait until your shields are destroyed? Look no further than Tactical Command Reticle. This brand new Weapon Upgrade costs only 2 SP and adds 1 Weapon Upgrade Slot to your ship’s Upgrade Bar. In addition, during the Combat Phase you may place 2 Time Tokens on this card to roll +1 attack die this game round. Keep in mind only one of these upgrades can be played per ship but there is nothing stopping you from equipping one on each of your ships for maximum firepower. 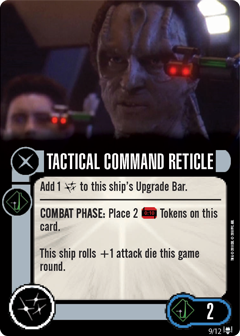 Speaking of firepower, the Dominion has some of the most powerful weapons you can find. One such weapon is Phased Polaron Beam. The Dominion has worked on making this weapon cheaper and more powerful than ever before. Phased Polaron Beam is now a 3 SP Weapon Upgrade that not only ignores shields but also allows you to convert a Battle Stations result into a Hit result. Any attack that can ignore Shields is going to be very effective but when you add the die conversion into the mix it is clear that this weapon is going to do some serious damage. 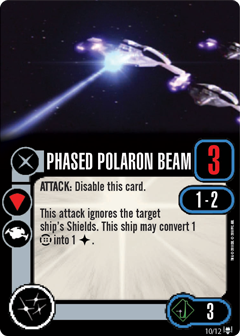 Ever wish that you could have another copy of a powerful crew upgrade but you couldn’t due to uniqueness or other card restrictions? Well the Dominion seem to have found a way around that rule. Cloning Facility allows you to target a Dominion Crew Upgrade equipped to this ship or a friendly ship within Range 1. This card then becomes a copy of the target Dominion Crew Upgrade this game round. 4 SP seems like a bargain to be able to clone your best crewmember and use them twice. The hardest choice you will have is who to clone. 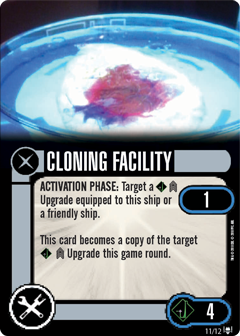 The Gorn Raider Card Pack is also part of Wave 3 and full of new exciting upgrades for the Independents Faction.

The Gorn Captain is Captain with a Captain Skill of 4 who highlights the iconic fight between the Gorn and Captain Kirk from The Arena. As an Action, you may disable this card and target an opposing ship within Range 1 and disable that ships Captain. For only 3 SP the ability to disable an enemy Captain can be game changing. So many Captains have such powerful abilities that robbing a ship of that Captain for even one round can tilt the game in your favor. While your enemy is weakened you may then plan your killing blow. 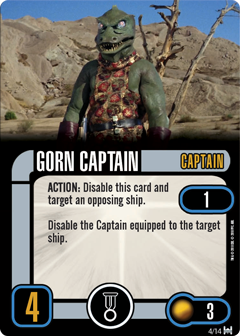 In terms of crew, Gorn Pilot returns to help make sure your ship can get where it needs to be at any time. The Gorn Pilot allows you to perform an additional 1 White Straight Maneuver if you have taken a Straight Maneuver this game round. Some times that little bit of maneuverability is all it takes to ensure victory and avoid defeat. 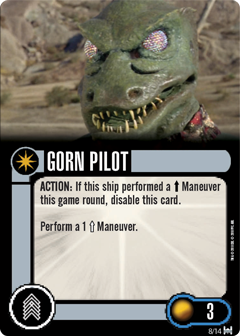 The Gorn are also packing some impressive weaponry that should make any foe fear Gorn aggression. Hidden Explosives cost 3 SP and allows you to target an opposing ship at Setup. You then place a Hidden Explosives Token on the target ship and 4 Time Tokens on this card.  When there are no more Time Tokens on this card you must discard this card. Then roll 3 attack dice that cannot be rerolled or modified. All Hit and Critical Hit results are applied directly to the target ship’s Hull. Once armed this weapon gives your opponent 4 turns before it detonates bypassing shields and going straight to the hull. Due to this Upgrade’s amazing power Hidden Explosives is Unique so that you can only play one copy in your Fleet. 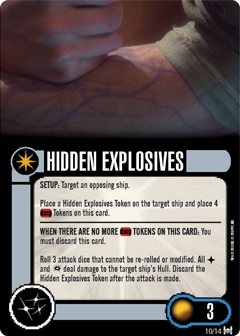 Weapons are in no short supply within the Gorn Raider Card Pack. Another new weapon is Disruptor Bombardment. This Weapon Upgrade costs 2 SP and as an Attack allows you place 3 Time Tokens on it to place a Mission Token within Range 1-2 and target all opposing ships within Range 1 of the Mission Token with a 4 die attack. Make a separate attack roll against each target ship. This attack cannot be obstructed by Obstacles or Planet Tokens, making it a very powerful attack option for the Gorn. 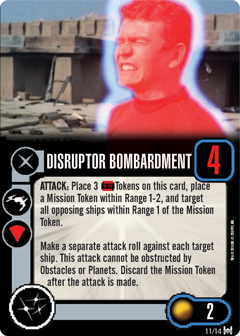 Last but not least, Gorn Sensors is an Independents Tech Upgrade that, for only 3 SP, brings yet another way to boost your damage potential. When this ship attacks with its Primary Weapon at Range 1, ranged combat bonuses are doubled. Instead of a +1 bonus for range your ship can now add +2 attack dice. Additionally, when this ship attacks with a Weapon Upgrade at Range 1, apply ranged combat bonuses. Where normally secondary weapons do not get ranged combat bonuses, Gorn Sensors allow you to get +1 attack die at Range 1. Since these bonuses apply to each attack you make as long as you are within the proper range this investment should pay huge dividends. 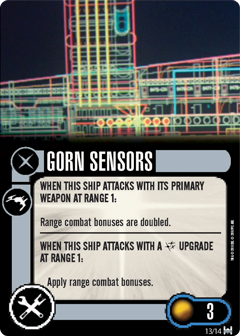 The Wave 3 Card Packs bring fresh new and exciting content to Star Trek: Attack Wing with new formatting and iconography that will streamline and improve gameplay. Players will enjoy these thematic packs and enjoy finding new and creative ways to build powerful fleets of ships to achieve victory.

Contact your local friendly game store to let them know that you want to order the new Star Trek: Attack Wing Wave 3 Card Packs. All of this exciting content and more is included in each Card Pack for the low MSRP of $9.99.  Be sure reserve your packs today and keep an eye out for other new products coming soon!

Visit WizKids at WizKids.com/AttackWing for additional information about Star Trek: Attack Wing and keep an eye out for more first looks and previews coming soon!