Now for some exclusive previews from the Dominion Faction Pack starting with the 2nd Division Battleship! 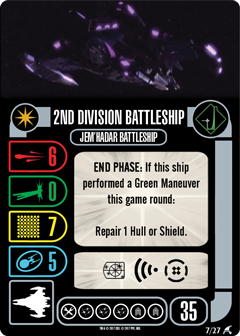 The 2nd Division Battleship is a powerful Jem’Hadar Battleship that will be familiar to Star Trek: Attack Wing players. This ship boasts a 6 Primary Weapon Value, 7 Hull, and 5 Shields, giving up agility for devastating firepower and survivability. The Action Bar contains a Target Lock, Scan, and Battle Stations Actions. The Upgrade Bar allows for you to customize your ship by adding 1 Tech Upgrade, 3 Weapon Upgrades, and 2 Crew Upgrades. As a special ability the 2nd Division Battleship can Repair 1 Hull or Shield during the End Phase if it performed a Green Maneuver this game round, all for 35 SP. Repairing a Hull Damage or Shield each round is an amazing ability especially for a ship that is so durable to start! 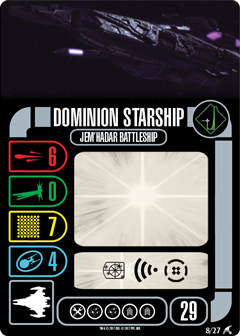 The generic version of the 2nd Division Battleship is simply called a Dominion Starship. For 29 SP you only lose one Shield and one Weapon Upgrade Slot compared to the named version of this ship. It is highly point efficient if you just want a powerful battleship without a special ability! 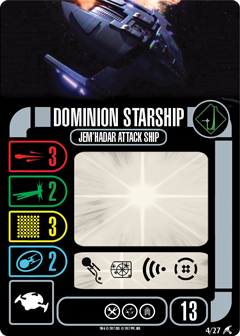 The Dominion Faction Pack also contains smaller more maneuverable ships, for those who prefer to move fast using agility rather than brute strength to win the day. The generic Jem’ Hadar Attack Ships are economical at only 13 SP each. They serve well as swarm ships overwhelming your enemies rather than relying on a single ship. These Attack Ships have a 3 Primary Weapon Value, 2 Agility, 3 Hull, and 2 Shields. Due to the low Hull and Shield values you need to be more cautious about your battle plans but since they are so cheap you can afford to field more of them. You also gain access to Evade, Target Lock, Scan, and Battle Stations Actions. You may add 1 Tech Upgrade, 1 Weapon Upgrade and 1 Crew Upgrade to these ships. 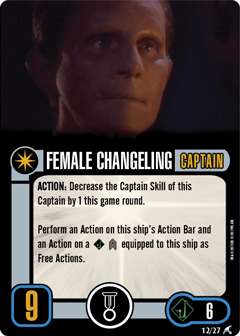 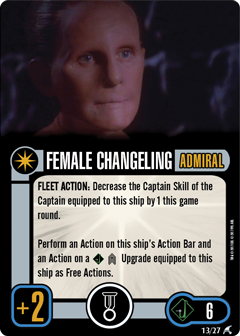 The Dominion was founded and ruled over by the Founders, a group of Changeling shape-shifters. Appearing as both Captain and Admiral Cards in the Dominion Faction Pack, Female Changeling is one of the powerful Founders. As a Captain Female Changeling has a high Captain Skill of 9 with 1 Elite Talent Slot. As an Action you may decrease the Captain Skill of this Captain by 1 this game round. If you do you may perform an Action on the attached ship’s Action Bar and an Action on a Dominion Crew equipped to this ship as Free Actions. As an Admiral, Female Changeling retains the same ability as a Fleet Action but adds +2 to your Captain Skill. Getting two actions as Free Actions will help ensure that the Founders retain control over the Dominion and anyone who opposes them! 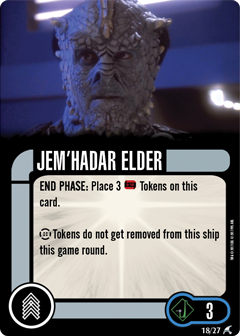 The desires of the Founders were carried out by the Jem’Hadar, who acted as soldiers and workers for the Dominion. Jem’Hadar Elder is a Crew Upgrade who, for 3 SP, ensures that Battle Station Tokens do not get removed this game round. However, during the End Phase you must place 3 Time Tokens on this card and wait for the ability to clear before you can use it again. Despite having to wait, the ability to allow unused Battle Station Tokens to stick around is a very powerful ability that you will be sure to see time and again. There is a reason why the Jem’Hadar are so feared as soldiers. They are relentless in their pursuit of the enemy and will not stop until all their enemies are destroyed! 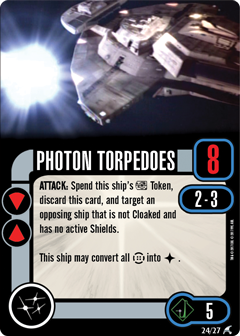 In terms of weaponry the Dominion Faction Pack offers a powerful version of Photon Torpedoes that reflects the new formatting and point cost moving forward. Photon Torpedoes costs 5 SP and allows you to make an attack from your primary or secondary firing arc using 8 attack dice at Range 2-3. When you attack, spend this ship’s Target Lock Token, discard this card, and target an opposing ship that is not Cloaked and has no active Shields. This ship may convert all Battle Stations results in to Hit results. This attack is sure to bring almost any enemy to heel before the might of the Dominion. 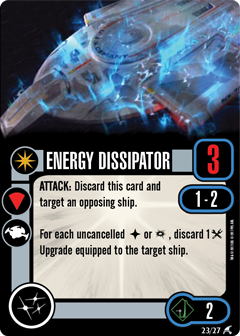 Energy Dissipator might seem familiar, but do not confuse this with the Energy Dissipator found in the Rav Laerst or Gor Portas packs. In this new incarnation, Energy Dissipator is a 2 SP Weapon Upgrade that fires from your primary arc at a Range of 1-2 with 3 attack dice. When you attack, discard this card and target an opposing ship. For each uncancelled Hit or Critical Hit result, discard 1 Tech Upgrade equipped to the target ship. Now in addition to damage you can also remove Tech upgrades from your opponent’s ships! 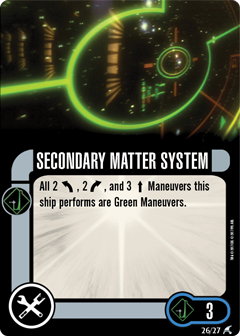 Speaking of Tech Upgrades, the Dominion Faction Pack adds some exciting new choices to upgrade your fleet. Quite often Dominion ships have problems with maneuverability and some seem to pilot like a giant bus rather than a spaceship. Secondary Matter System is a Tech Upgrade that can change all of that for 3 SP. All 2 Bank and 3 Straight Maneuvers this ship performs are Green Maneuvers. Now there is no need to fear a dreaded red maneuver or even better clear an Auxiliary Power Token by making a Green Maneuver without having to slow your movement. Watch out Federation it looks like the Dominion just learned some fancy new maneuvers! 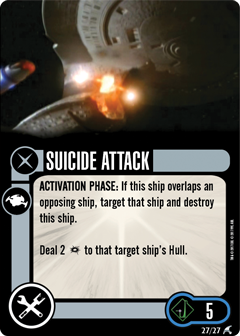 In the event the Dominion cannot overwhelm their enemies with sheer firepower, they have been known to sacrifice their own ships to take the enemy out with a Suicide Attack. During the Activation Phase if this ship overlaps an opposing ship, target that ship and destroy this ship. Deal 2 Critical Hits to that target ship’s Hull. The Dominion is determined to win one way or the other even if it means sacrificing their own ships to do it!

Last but not least the Dominion Faction Pack adds two new Missions as a way to challenge your skills of reenacting battles from Star Trek lore.

The first mission is entitled “Destroy the Capital Ship.” The premise is simple, a training exercise is underway to determine the ability of a fleet a to handle unending swarms controlled by a command vessel. As Admiral, it is up to you to eliminate the command ship. 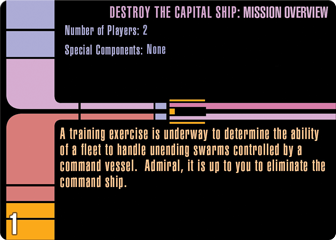 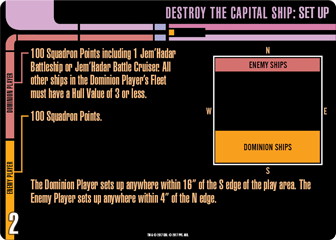 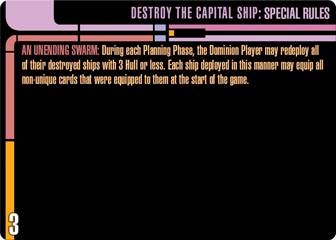 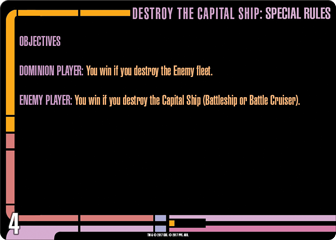 For this mission you can be either the Dominion Player or the Enemy Player.

The Dominion Player gets 100 Squadron Points to build a fleet that must include 1 Jem’Hadar Battleship or Jem’Hadar Battle Cruiser. All other ships must have a Hull Value of 3 or less.

The Enemy Player gets 100 Squadron Points to build a fleet.

During each Planning Phase, the Dominion Player may redeploy all of their destroyed ships with 3 Hull or less. Each ship deployed in this manner may equip all non-unique cards that were equipped to them at the start of the game.

The Dominion Player wins if you destroy the Enemy Fleet.

The second mission is entitled “Destroy the Intruders.” For this mission you will require 1 Planet Token, 1 Mission Token and 3 Objective Tokens. 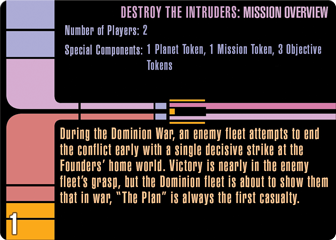 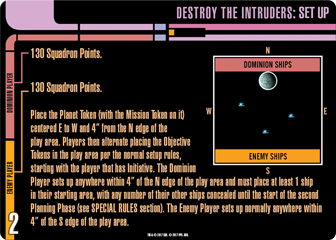 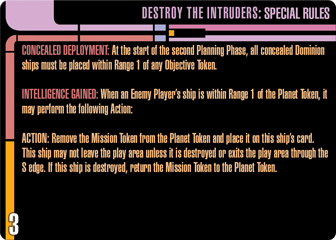 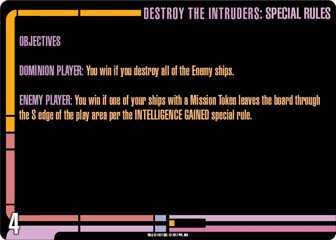 During the Dominion War, an enemy fleet attempts to end the conflict early with a single decisive strike at the Founders’ home world. Victory is nearly in the enemy fleet’s grasp, but the Dominion fleet is about to show them that in war, “The Plan” is always the first casualty.

At the start of the second Planning Phase, all concealed Dominion ships must be placed within Range 1 of any Objective Token.

When an Enemy Player’s ship is within Range 1 of the Planet Token, it may perform the following Action:

The Dominion Player wins if you destroy all the Enemy ships.

The Enemy Player wins if one of your ships with a Mission Token leaves the board through the S edge of the play area per the INTELLIGENCE GAINED special rule.

The Dominion Faction Pack brings fresh new and exciting content to Star Trek: Attack Wing with new formatting and iconography that will streamline and improve gameplay. Players will enjoy these thematic packs and enjoy finding new and creative ways to build powerful fleets of ships to achieve victory.

Contact your friendly local game store to let them know that you want to order the new Star Trek: Attack Wing Faction Packs starting with the Dominion Faction Pack. All of this exciting content and more is included in the Dominion Faction Pack for the low MSRP of $29.99! Be sure to reserve your pack today and keep an eye out for other new products including the Federation Vs. Klingon Starter Set coming late December!

Visit WizKids at WizKids.com/AttackWing for additional information about Star Trek: Attack Wing and keep an eye on StarTrek.com for more first looks and previews coming soon!