Now for some exclusive previews from the Romulan Faction Pack starting with the P.W.B Tomal! 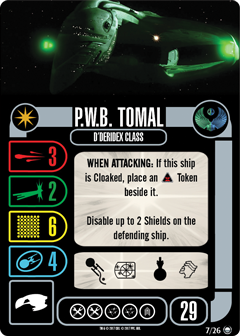 The P.W.B. Tomal is a D’deridex class ship, a staple of the Romulan Fleet. This ship has a Primary Weapon Value of 3, Agility of 2, Hull Value of 6, and Shield Value of 4 for 29 SP. While they may not be the most powerful ships, these Romulan ships are well rounded, balancing firepower, agility and survivability. The P.W.B. Tomal gives you access to Evade and Target Lock Actions as well as the trademark Cloak and Sensor Echo Actions that help make the Romulans so sneaky. Your Upgrade Bar allows for 2 Tech Upgrades, 2 Weapon Upgrades and 1 Crew Upgrade. As a special ability, when this ship is attacking you may disable up to 2 shields on the defending ship if this ship is cloaked. You must then place an Auxiliary Power Token beside your ship. 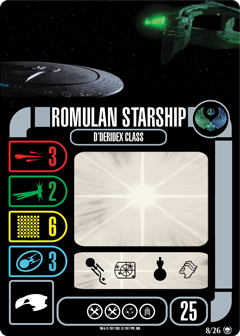 The Generic Version of the P.W.B. Tomal is simply called a Romulan Starship. For 25 SP you only lose one Shield and one Weapon Upgrade Slot compared to the named version of this ship. It is highly point efficient if you just want a solid ship without a special ability. 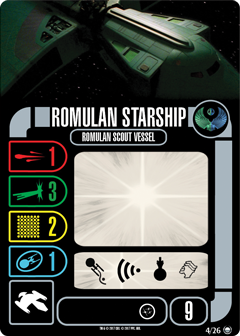 The Romulan Faction Pack also contains smaller more maneuverable ships as opposed to the larger warships. The generic Romulan Scout Vessel is only 9 SP but this tiny vessel can act as a mighty support vehicle. With a Primary Weapon Value of 1, Agility Value of 3, Hull Value of 2 and Shield Value of 1, this clearly isn’t an attack ship. However, with your one Weapon Upgrade the Romulan Scout Vessel can pack a nasty surprise. 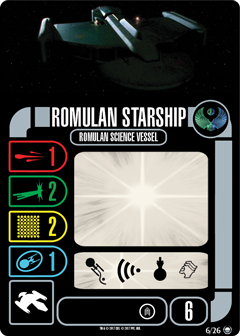 Similarly, the Generic Romulan Science Vessel is a fragile ship that only costs 6 SP. With its Primary Weapon Value of 1, Agility Value of 2, Hull Value of 2 and Shield Value of 1 it will rely on stealth and strategy to win the day. The 1 Crew Upgrade allows you to add a crewmember to boost this ship’s performance. 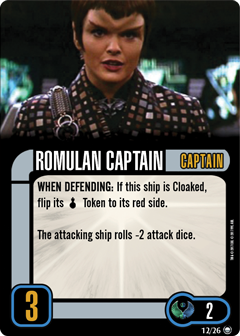 The Romulan Empire is a major interstellar state known for secrecy, subterfuge and territorial expansionism and is counted among the great powers of the Milky Way Galaxy. Romulans have rejected the emotional control and logic of Vulcan society in favor of controlled deviousness. The Romulan Captain herself is a skill level 3 for only 2 SP. When defending if this ship is Cloaked, flip its Cloak Token to its red side. The attacking ship rolls -2 attack dice. It is clear to see why Romulan technology is often cited as one of the reasons why the Romulan Empire is regarded as such a dangerous foe in times of war. 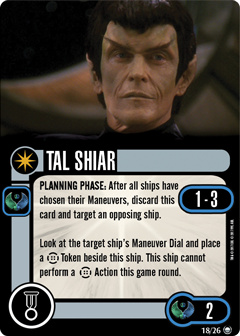 You may recognize Tal Shiar as an Elite Talent found in the I.R.W. Belak Expansion Pack. This Elite Talent returns in the Romulan Faction Pack with a large cost reduction and features new formatting and iconography to make the card easier to understand. Now for only 2 SP you may equip the Elite Talent to a Romulan Captain in order to discard this card during the Planning Phase, after all ships have chosen their maneuvers, target an opposing ship. Look at the target ship’s Maneuver Dial and place a Battle Stations Token beside this ship. This ship cannot perform a Battle Stations Action this game round. 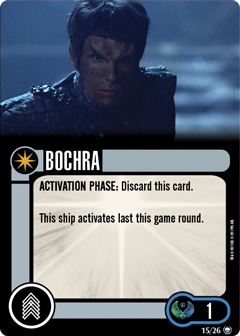 In terms of crew upgrades, Bochra returns to the Romulan Faction Pack as a 1 SP Crew Upgrade. This time however, you may discard Bochra during the Activation Phase so that this ship activates last this game round. This is just one of the sneaky tricks that Romulans employ to get the advantage over their enemies. 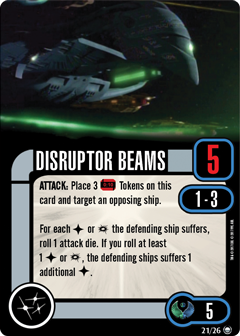 Disruptor Beams is a 5 SP Weapon Upgrade that was last seen in the I.R.W. Haakona Expansion Pack. This updated version uses the new format and iconography but also places 3 Time Tokens on this card, rather than simply disabling when you attack and target an opposing ship. For each Hit or Critical Hit the defending ship suffers, roll 1 attack die. If you roll at least 1 Hit or Critical Hit Result, the defending ship suffers 1 additional Hit result. 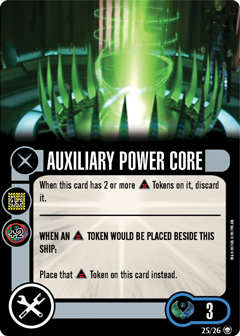 Last but not least the Romulan Faction Pack adds two new Mission Scenarios as a way to challenge your skills of reenacting the famous battles from Star Trek lore. The first mission is entitled “Attack on the Founders’ Homeworld” and can be played with 2 or 3 players. You will need 1 Planet Token and 12 Mission Tokens to play this mission. 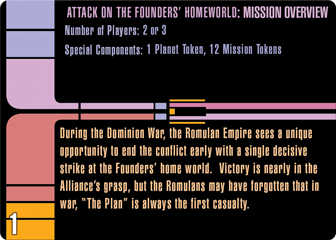 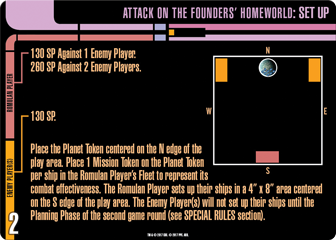 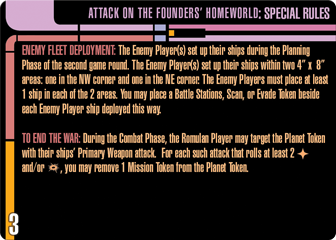 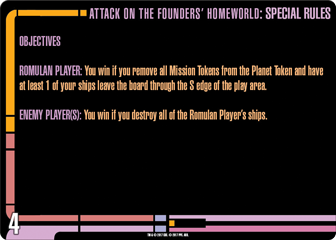 During the Dominion War, the Romulan Empire sees a unique opportunity to end the conflict early with a single decisive strike at the Founders’ home world. Victory is nearly in the Alliance’s grasp, but the Romulans may have forgotten that in war, “The Plan” is always the first casualty.

To set up, place the Planet Token centered on the N edge of the play area. Place 1 Mission Token on the Planet Token per ship in the Romulan Player’s Fleet to represent its combat effectiveness. The Romulan Player sets up their ships in a 4” x 8” area centered on the S edge of the play area. The Enemy Player(s) will not set up their ships until the Planning Phase of the second game round.

During the Combat Phase, the Romulan Player may target the Planet Token with their ships’ Primary Weapon attack. For each such attack that rolls at least 2 Hit Results and/or Critical Hit Results, you may remove 1 Mission Token from the Planet Token.

The Romulan Player wins if you remove all the Mission Tokens from the Planet Token and have at least 1 of your ships leave the board through the S edge of the play area.

The Enemy Player(s) win if you destroy all the Romulan Player’s ships.

The second mission is entitled “Rights of the Neutral Zone.” For this mission you will require 1 Planet Token, 1 Mission Token, 12 Mission Tokens and 1 Unused Maneuver Dial with White, Green and Red Maneuvers. 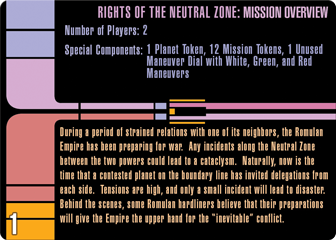 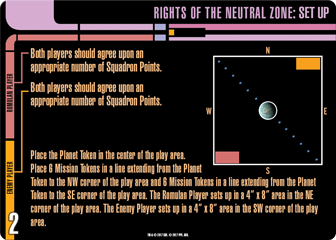 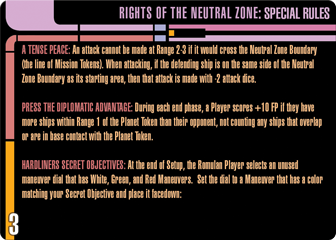 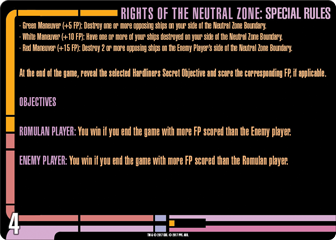 During a period of strained relations with one of its neighbors, the Romulan Empire has been preparing for war. Any incidents along the Neutral Zone between the two powers could lead to a cataclysm. Naturally, now is the time that a contested planet on the boundary line has invited delegations from each side. Tensions are high, and only a small incident will lead to disaster. Behind the scenes, some Romulan hardliners believe that their preparations will give the Empire the upper hand for the “inevitable” conflict.

Special Rules for the Mission are as follows:

During each end phase, a Player scores +10 FP if they have more ships within Range 1 of the Planet Token than their opponent, not counting any ships that overlap or are in base contact with the Planet Token.

At the end of Setup, the Romulan Player selects an unused maneuver dial that has White, Green and Red Maneuvers. Set the dial to a Maneuver that has a color matching your Secret Objective and place it facedown.

Green Maneuver (+5 FP): Destroy one or more opposing ships on your side of the Neutral Zone Boundary.

White Maneuver (+10 FP): Have one or more of your ships destroyed on your side of the Neutral Zone Boundary.

Red Maneuver (+15 FP): Destroy 2 or more opposing ships on the Enemy Player’s side of the Neutral Zone Boundary.

At the end of the game, reveal the selected Hardliners Secret Objective and score the corresponding FP, if applicable.

The Romulan Player wins if you end the game with more FP than the Enemy player.

The Enemy Player wins if you end the game with more FP than the Romulan player.

The Romulan Faction Pack brings fresh new and exciting content to Star Trek: Attack Wing with new formatting and iconography that will streamline and improve gameplay. Players will enjoy these thematic packs and enjoy finding new and creative ways to build powerful fleets of ships to achieve victory.

Contact your friendly local game store to let them know that you want to order the new Star Trek: Attack Wing Faction Packs starting with the Romulan and Dominion Faction Packs! All of this exciting content is included in the Romulan Faction Pack for the low MSRP of $29.99.  Be sure reserve your pack today and keep an eye out for other new products including the Federation Vs. Klingon Starter Set coming late December!

Visit WizKids at WizKids.com/AttackWing for additional information about Star Trek: Attack Wing and keep an eye on StarTrek.com for more first looks and previews coming soon!