WizKids/NECA is happy to announce brand-new content for Star Trek: Attack Wing, starting with Star Trek: Attack Wing Card Packs – Wave 1. Each Card Pack contains 11 cards, Captain Tokens and a Ship Token. Each pack will focus on a particular ship and contain fun thematic cards with a new point-efficient cost system that will add a new level of depth and excitement to gameplay. In addition, the new formatting and iconography for cards will now allow players to easily identify game effects such as triggers, durations, range and firing arc.

The next ship to be previewed is the Dreadnought. The Dreadnought is a Cardassian ATR-4107, which is more like a giant missile as opposed to a ship. The Dreadnought has a high Primary Weapon Value of 6, 0 Agility, 4 Hull and 5 Shields all for 29 SP. You cannot equip a Captain or Admiral to this ship, however, when this ship has no damage cards, treat its Captain Skill as 12. The Dreadnought is a weapon pure and simple. It is meant to strike fast and strike hard at an opponent. A Captain Skill of 12 will help ensure that you fire first and the Primary Weapon Value of 6 will help to destroy any target you might face. 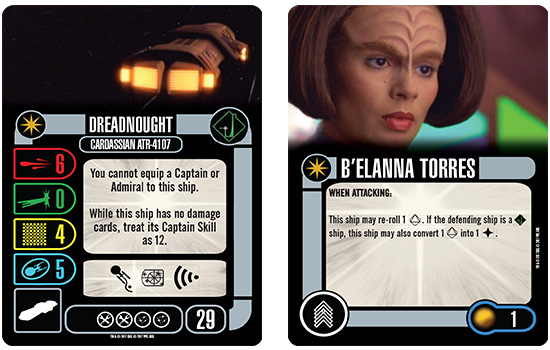 While there is no Captain in this Card Pack, B’Elanna Torres is the sole Crew Upgrade in this pack having managed to board and reprogram the ship. You will notice that the Dreadnought also lacks Crew Slots on its Upgrade Bar, however, the original Dreadnought Expansion Pack (Wave 21) contained Maintenance Crew a Tech Upgrade which can add one Crew Slot allowing B’Elanna to come aboard. B’Elanna may re-roll 1 [Blank] when attacking. If the defending ship is a Dominion ship, this ship may also convert 1 [Blank] into 1 [Hit]. For 1 SP B’Elanna is a great value as her ability does not require a disable or discard and can be used every game round.

There are four different Weapon Upgrades contained in the Dreadnought Card Pack that you can equip to your ship.  The first is Thoron Shock Emitter, for only 2 SP you can make a 6 die attack at Range 1-3. You may also re-roll any number of those attack dice. 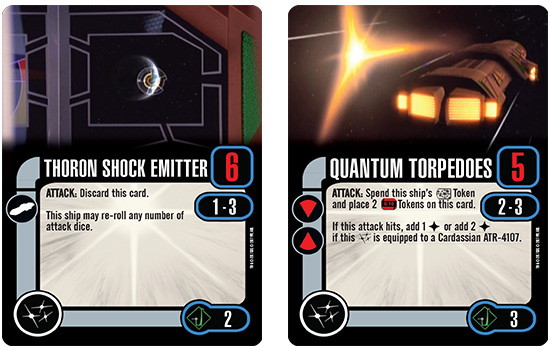 Quantum Torpedoes may seem familiar, however, the cost of this weapon is a mere 3 SP compared to the previous 6 SP for the same effect. This weapon can be fired from the front or rear firing arcs and require the ship to spend its [Target Lock] Token to roll 5 attack dice at a Range of 2-3. If this attack hits, add 1 [Hit] or add 2 [Hit] if this Weapon is equipped to a Cardassian ATR-4107.

Plasma Wave costs 3 SP and must be discarded to attack with 4 dice at Range 1-2. The defending ship cannot spend [Battle Stations] or [Evade] Tokens. Alternatively, when defending you may discard this card to give the attacking ship 1 [Critical Hit]. Note the new [X] iconography on this card which signifies that only one of these cards can be deployed per ship. 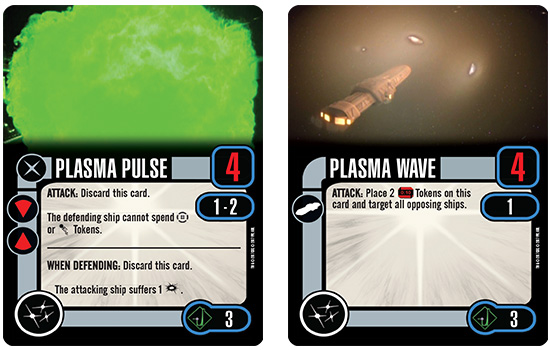 Although weapons are a large focus of the Dreadnought Card Pack there are also several other upgrades worth noting. B’Elanna’s Codes is a Tech Upgrade that for 3 SP can help protect your Weapon Upgrades or make them work more efficiently. If one or more [Time] Tokens would be placed on a Weapon Upgrade equipped to this ship, place those [Time] Tokens on this card instead. If a Weapon Upgrade equipped to this ship would be discarded you may discard this card instead. Once B’Elanna got on board the Dreadnought she was able to reprogram the ship to work better. Now, those pesky [Time] Tokens won’t slow you down as much or they can save your weapon from being discarded altogether. 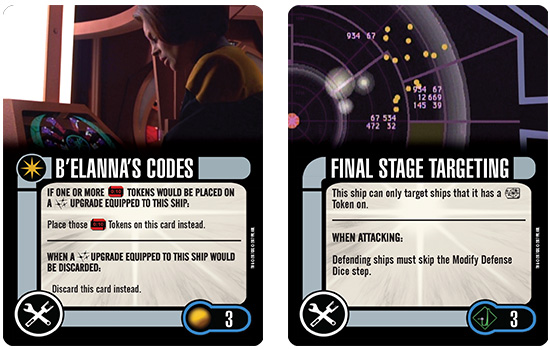 If you want your weapons to function more efficiently you might want to also consider Final Stage Targeting. For 3 SP this Tech Upgrade forces defending ships to skip the Modify Defense Dice step. This means no re-rolls, no changing dice faces and no spending tokens. This ship can only target ships that have a [Target Lock] Token on it. Final Stage Targeting is a powerful upgrade that can cripple your opponent’s defensive capabilities.

Shifting to defense Shield Adaptation can only be used on ships with a Hull Value of 4 or greater. When defending the attacking ship rolls -2 attack dice when firing a Primary Weapon and -1 attack die when firing a Weapon Upgrade. You must discard this card if this ship has no active Shields. The Dreadnought is low on defense with a 0 Agility Value, but Shield Adaptation can help keep the Dreadnought around longer by reducing the attack strength of your enemies as long as you have active Shields. 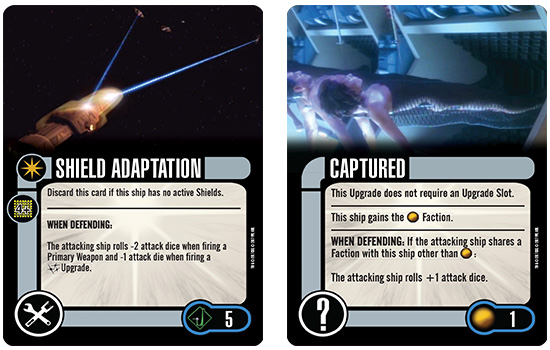 The Dreadnought Card Pack brings fresh and exciting content to Star Trek: Attack Wing with new formatting and iconography that will streamline and improve gameplay. Players will enjoy these thematic packs and enjoy finding new and creative ways to build powerful fleets of ships to achieve victory.

Contact your local game store to let them know that you want to order the new Star Trek: Attack Wing Card Packs- Wave 1, including the Dreadnought. All of this content is included in the Dreadnought Card Pack for the MSRP of $9.99. Be sure reserve your pack today.

Visit WizKids/NECA at WizKids.com/AttackWing for additional information about Star Trek: Attack Wing. And keep an eye on StarTrek.com for more First Looks and previews, coming soon.