WizKids/NECA is happy to announce brand-new content for Star Trek: Attack Wing, starting with Star Trek: Attack Wing Card Packs – Wave 1. The Card Pack contains 11 cards, Captain Tokens and a Ship Token. Each pack will focus on a particular ship and contain fun thematic cards with a new point efficient cost system that will add a new level of depth and excitement to gameplay. In addition the new formatting and iconography for cards will now allow players to easily identify game effects such as triggers, durations, range and firing arc.

The next Card Pack to be previewed is for Prototype 02. Romulan Drone ships are fast and maneuverable. For only 19 SP you get 3’s across the board for Primary Weapon, Agility, Hull and Shields. The generic version of the ship is a lean 16 SP with three Tech Upgrade slots and one Weapon Upgrade slot allowing you to customize the drone. During the Planning Phase you may place an Auxiliary Power Token beside this ship. Then remove 1 [Time] Token from each Tech Upgrade equipped to this ship. This ship may only be equipped with Gareb or a Romulan Drone Pilot as its Captain. 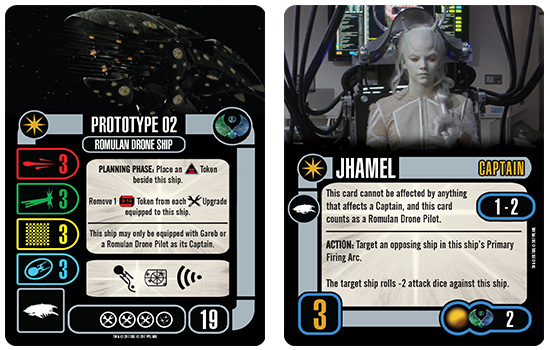 Gareb can be found in the Prototype 01 Expansion Pack from Star Trek: Attack Wing – Wave 11, but this Card Pack offers a new Captain for the Prototype 02. Jhamel counts as a Romulan Drone Pilot and is a skill level 3 Captain. This card cannot be affected by anything that affects a Captain. As an Action, Jhamel can target an opposing ship at Range 1-2 in this ship’s Primary Firing Arc. The target ship rolls -2 attack dice against this ship. Combined with the Prototypes high agility value the chances of evading most or all of an attack are high.

The Tellarites make their first appearance in Star Trek: Attack Wing with a Crew Upgrade and a Weapon Upgrade in the Prototype 02 Card Pack. Tellarite Bounty Hunter is a Crew Upgrade that when discarded allows you to discard an Evade Token from beside an opposing ship within Range 1-2. For only 1 SP, this Crew Upgrade is cannon-fodder for crew-killing upgrades. If anyone dares discard this card from your ship they can expect to be a target for your next attack, minus 1 Evade Token. Tellarite Disruptor Banks, however, is a 3 SP Weapon Upgrade that gives teeth to your threat of violence. This attack uses 4 attack dice at Range 1-3. If there is at least 1 uncancelled [Hit], modify the defender’s Agility Value by -1 until the end of the game round.

If you prefer to stick to Romulan upgrades, Triphasic Emitters is a 2 SP Weapon Upgrade that allows you to choose a Non-Borg Weapon Upgrade with a cost of 5 SP or less and place it beneath this card. During the Attack Phase, you may discard this card to flip the card beneath this card face up and perform the attack listed on that card (if possible). After the attack resolves, discard that card.  Triphasic Emitters allows the ship to “cheat” out a more expensive upgrade for one attack. Make it big and make it count!

With 3 Tech Upgrade Slots the Prototype 02 has plenty of room for Romulan Tech Upgrades to help win any battle. Focusing on movement, evasion, disguise, and repair the Romulans have all of the defensive bases covered. 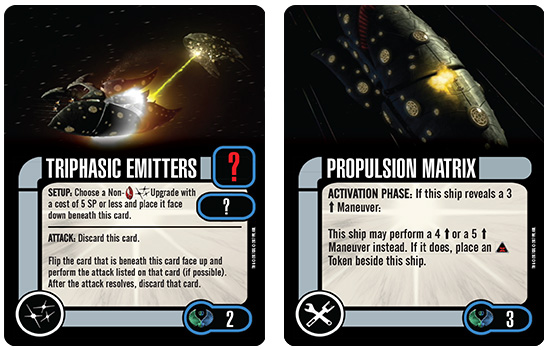 Propulsion Matrix is a 3 SP Tech Upgrade that allows you to perform a 4 [Straight] or a 5 [Straight] Maneuver instead of its programmed Maneuver if this ship reveals a 3 [Straight] Maneuver during the Activation Phase. If it does, place an Auxiliary Power Token beside this ship. Sometimes you just need to get somewhere quickly. Propulsion Matrix will make sure you can get there in a hurry to hopefully catch your opponent off guard.

Evasive Protocol is a 3 SP Tech Upgrade that allows you to perform a [Sensor Echo] as a Free Action, if during the Combat Phase this ship is in the Primary or Secondary Firing Arc of an opposing ship. Place 3 [Time] Tokens on this card.  If you do, you may also remove an opposing [Target Lock] Token from this ship. Never get caught by surprise with Evasive Protocol. If you find yourself in someone’s firing arc, simply Sensor Echo your way to safety.  When you just need to get away from the enemy, Evasive Protocol will help you escape from your enemies.

If you can’t escape an attack, you’ll want to lessen the impact with a strong defense. Disguise Protocol is a 4 SP Tech Upgrade that when defending can force the attacking ship to roll -2 attack dice. If you use this ability, place 3 [Time] Tokens on this card. Disguise Protocol will help take the sting out of those attacks that you can’t avoid completely by lowering the number of attack dice coming at you.

Last but not least, if you have been hit and have taken damage, you will need to repair your ship. Repair Protocol is a 4 SP Tech Upgrade that allows you to repair 1 damage to this ship’s Shields or Hull during the End Phase. If you do so, place 3 [Time] Tokens on this card. Repairing damage is a trick you might recall from the Prototype 01 but it appears again in a slightly different form in the Prototype 02 Card Pack. Used on the Prototype 01 however, Repair Protocol shines even brighter.

The Prototype 02 Card Pack brings fresh new and exciting content to Star Trek: Attack Wing with new formatting and iconography that will streamline and improve gameplay. Players will enjoy these thematic packs and enjoy finding new and creative ways to build powerful fleets of ships to achieve victory.

Get all of this content in the Star Trek: Attack Wing – Prototype 02 Card Pack releasing this September at your local game store for $9.99 MSRP. Be sure reserve your pack today.

Visit WizKids/NECA at WizKids.com/AttackWing for additional information about Star Trek: Attack Wing. And keep an eye on StarTrek.com for more First Looks and previews coming soon.