Your fleet has encountered a damaged ship from the past that has emerged from a strange temporal rift. While repairing it, you realize that this ship has caused your timeline to be altered and have determined that it must return through the rift to its own time to set things right. As your fleet escorts the damaged ship back to the rift, you are set upon by an enemy fleet.

Will you successfully return the damaged ship to its own time? Or will the ship be destroyed en route to the rift, leaving you stuck in this alternate time line?

Place an Objective Token centered N to S so that it touches the E edge of the play area.

The players set up normally using the Standard 2-Player Rules with the following exceptions:

The Objective Token represents the Temporal Rift. When a ship executes a maneuver in which either the Maneuver Template or the ship’s base physically overlaps the Objective Token, that ship is considered to have entered the rift and is immediately removed from the play area for the rest of the game.

In addition, if a ship exits the play area within Range 1 of the Objective Token, it is also considered to have entered the rift and is immediately removed from the play area for the rest of the game.

One ship in each player’s fleet is considered to be the damaged ship that is attempting to enter the temporal rift. Place Critical Hit Tokens beside both these ships. These tokens cannot be removed for the duration of the game.

Once a player’s damaged ship enters the rift, immediately flip up all of that player’s face down cards. Those cards are useable immediately. NOTE: An Upgrade card that is flipped face up cannot add Upgrade slot(s) to its ship.

The game ends when one player is eliminated or when the time limit is called. 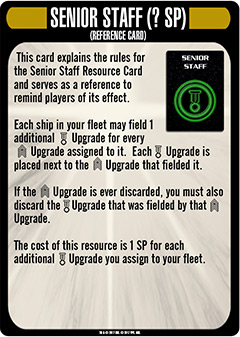 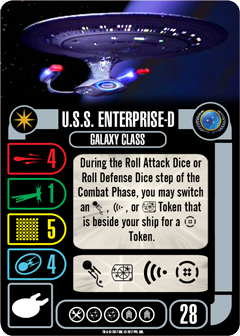 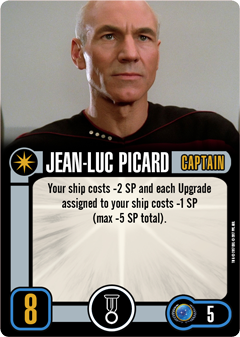 As you might expect none other than Jean-Luc Picard is the Captain of the U.S.S. Enterprise-D. While we have seen many versions of Captain Picard, this version reduces the cost of your ship by – 2 SP and each Upgrade on the assigned ship costs -1 SP (max -5 SP total). If you want an iconic Captain who can literally pay for himself, then Jean-Luc Picard is the man for the job. 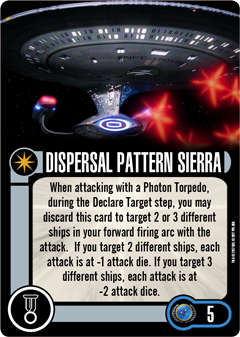 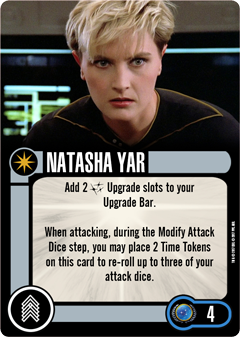 Natasha Yar was the shocking crewmember brought back in Yesterday’s Enterprise. Here she is a Crew Upgrade that allows you to add 2 Weapon Upgrade slots to your Upgrade Bar. Additionally, when attacking, during the Modify Attack Dice Step, you may place 2 Time Tokens on this card to re-roll up to three of your attack dice. Talk about economy? 4 SP buys your two extra Weapon slots and access to valuable re-rolls. It is great to see you back Tasha! 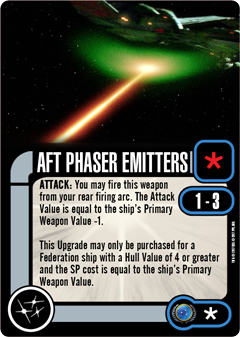 Aft Phaser Emitters is a Weapon Upgrade that allows you to fire from your rear arc. The attack value is equal to your ship’s Primary Weapon Value -1. This Upgrade may only be purchased for a Federation ship with a Hull Value of 4 or greater and the SP cost is equal to the ship’s Primary Weapon Value. Despite the restrictions, this is one amazing weapon. The ability to fire from your rear arc every turn is super powerful. It will be hard to escape the firing arc of any Federation ship using Aft Phaser Emitters. 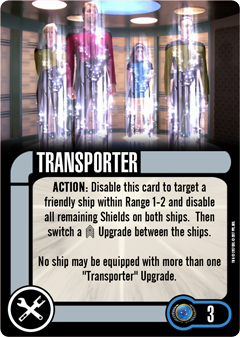 Transporter is the Tech Upgrade in this prize pack. As an Action you may disable this card to target a friendly ship within Range 1-2 and disable all remaining Shields on both ships. Then switch a Crew Upgrade between the ships. Nothing is more iconic to Star Trek than beaming crew members from ship to ship. Just be sure to use this while at a safe distance from your enemy.

Yesterday’s Enterprise is sure to be a popular event due to the amazing prize cards and the appearance of Natasha Yar and the U.S.S. Enterprise-D. With all these great prizes up for grabs, you will want to make sure you reserve your spot for this event early by contacting your nearest local game store. Build your best fleet to defend your timeline and become champion!