We previewed Constantine: Hellblazer what seems like a long time ago, but I need some time to gush about how great this card is, and how no matter what your interest in Dice Masters is like, you’ll like it. When it comes to DC Comics Dice Masters: Justice League, this card is at the top of my “Do Not Ignore” list. I’d recommend you put him there too.

Let’s start with the card: 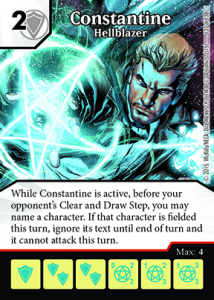 For starters, he’s a 2 cost Shield character. There are very few characters that fit that cost; fewer still are competitive. He has a low cost to field as well, and his die has some bulk to it. He isn’t going to get taken out by Sidekicks, and can even block them for decent effect.

Constantine doesn’t require you to purchase any other dice to be highly effective. This means that he needs exactly one spot out of your eight character spots on your team. He takes as much space as you’d set aside for a Global Ability, except your opponent can never use him. He improves the economics and consistency of your team as well. If you wanted to, you could even play 4 copies of his die as a low-cost source of Shield energy.

Constantine helps you dictate tempo by stopping an attack or two, which is pretty straightforward. In a deeper way, he can shift which player hits their fundamental turn first. For readers who might not be familiar with the term, there is an idea that on the nth turn of the game, you should be achieving a certain goal. Just like you planned on getting your driver’s license at a certain age, your aggressive Dice Masters team might plan to deal the 20th point of damage on turn 5. For control strategies, it tends to describe a milestone in implementing your strategy (such as fielding a key card or clearing the Field Zone). Constantine can wreak havoc on your opponent’s fundamental turn.

On turn 4, my opponent plans to roll a specific combo of character dice (even a lucky one), and attack me for game. While Constantine denying them that opportunity is only temporary, it buys me at least an extra turn in most situations. That gets me closer to my own fundamental turn, where I can wallop my opponent with my team’s secret sauce. In some cases, this will be almost as good as going first when I went second. Optimistically, in other cases, it will be almost as good as going first twice.

Constantine rewards you for understanding your opponent. Predict which cards of theirs you’d like to blank, which of their character dice you don’t want to defend against, but most importantly: which dice are they about to draw? Which are most fundamental to their strategy? You’ll need to balance those concerns when you name a die for Hellblazer’s ability. The easiest situations will be those where your opponent has put all of their eggs into one basket, and naming a single character will be a guarantee to stop all of the dice your opponent has purchased. Simply bringing Constantine to the table should force a fundamental difference in your opponent’s purchase strategy – a narrow, easily predicted route to victory is no longer an option for them. He can prevent a swarm of low-cost characters from being effective just as easily as he can pull the wheel off a well-oiled machine.

To reap the rewards of Constantine you’ll need to know on a fundamental level whether your team wants a longer game than your opponent’s does. This will help determine whether your picks with Constantine are offensive or defensive. Learning to make the right picks here is tough if you’re inexperienced. Not only will playing lots of games with your strategy (and Constantine) help, but trying out lots of different strategies will help you build an intuition so you can save your mental bandwidth for even tougher decisions.

Constantine keeps your characters (and you) safe from “When fielded” abilities. Your opponent will either have to field those dice to no effect, and field them again later, or totally forego the opportunity to use those characters. This is simply stated, but has a very big impact.

Constantine gives you something extra to do by predicting during your opponent’s clear and draw step. He’s tricky. No one cons a con man, and Hellblazer shows you how that looks in Dice Masters.

He fits in with the House of Mystery by discouraging players from fielding multiples of dice. 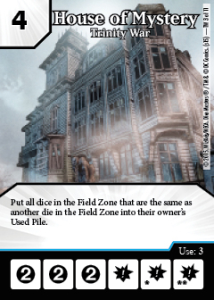 If you want to play Constantine, he can fit into virtually any strategy. You’ll get a chance to use him nearly every game. That satisfaction is harder to come by with many superheroes and villains.

He isn’t his own counter. If you opt out of playing Constantine despite how awesome and exciting he is, the ways to get around him are available to you.

Constantine doesn’t let either player work on autopilot. You’ll need to try to pivot while using Constantine in order to keep a leg up on your opponent before they get the read on what you’re planning. You’ll only have a handful of options to name with him, but many of the options will be meaningful; unlike in other games where only a handful of options are relevant out of 30+.

Constantine is a scale tipper, but he isn’t self-sufficient enough to be a game winner. He’s a fixer. You’re going to need someone else to deal most of the 20 damage to your opponent.

He’s good in Rainbow Draft. Every single version of Constantine is a 2 cost to buy. When you see a handful of Constantine dice go into the center of the table at the Rainbow Draft, you’re absolutely forced to wonder if someone pulled him. On the chance that they did, you want to be as sure as possible they won’t get all 4 dice on him. On the flip side, his other versions are really solid for draft play, so it isn’t pure hate-drafting.

Constantine has some totally sweet art. I love my heroes looking as cool as possible, and John Constantine checks that box.

If your plan was to attack with Cheetah: Cursed Archaeologist until you’re blue in the face, you’re going to need some backup for her. She’ll be slowed down by a turn, and is more expensive than Constantine. One possibility would be to use Darkseid: In Search of Anti-Life or Firestorm: Atom Rearranger since Hellblazer won’t be able to stop them both. Another would be to use characters that key off others like Black Manta: Deep Sea Deviant. If you have a character like Black Manta fielded already, you’ll be able to use his ability during your opponent’s turn to get some damage in by blocking and allowing the rest of the Legion of Doom to get KO’d. 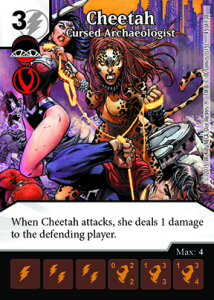 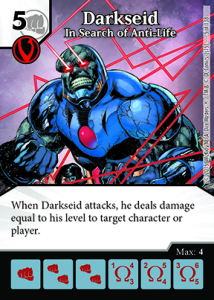 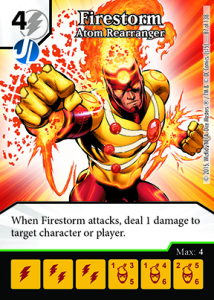 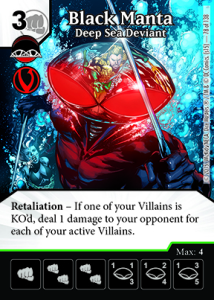 Reroll your characters to be energy faces. This is a skill you’ll develop with practice. It won’t work exactly the same for every strategy, and it most certainly won’t work the same way in every matchup. You’ll need to develop your buy order as well as be able to avoid your bag getting weighed down with dice that won’t drive your strategy (even if they’re better than Sidekicks).

Don’t obsess over Constantine. He’s going to be one of the first things many opponents throw at you, but like I said above, they need a plan to win the game. Disrupt that plan!

Go enjoy playing Dice Masters! I’ve gushed about a card I’m excited about, but after opening even a few packs, I hope you pull a card or two that you’re excited about too. Get together with some friends and some new teams to figure out which new cards you like most!

About the Author: Jimmy O.

Jimmy is a business and legal associate who enjoys playing Dice Masters (and other games) in his free time. His number one tip to new players (of any game) is to remember that everyone starts somewhere.