Are the odds in your favor? 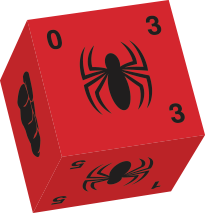 Have you ever wondered, right when you drew the dice from your bag at the beginning of the turn, “Will I be able to get a Spider-Man character from that die, or is he going to end up on energy?” Let’s explore this scenario, using one of the most overlooked tools in our gaming tool belt:

Hopefully there are more than 3 people left reading at this point. I know math has a stigma attached to it, and is avoided by a lot of people. That’s a shame, because understanding math can really improve your game. Math shows its face all over the game of Dice Masters. It’s in the combat, when you are dealing and receiving damage. It’s there while you are purchasing new dice to add to your Used Pile. It is also there when we start drawing the dice from our bag and begin rolling them.

In that last example, we are talking about probability, and probability can be one of the more complicated parts of math. The funny thing is, it’s not the actual number crunching that makes probability difficult, it’s our brains. For the most part, our brains do a great job of making good decisions, and getting us through the day. When faced with probability though, it often makes assumptions that just don’t work.

For example, let’s say you are playing a game of Dice Masters, and you just did your initial roll from the Roll and Reroll step. You roll the double [fist] side on your Spiderman die, and you really wanted to get a character on it. So, of course, you pick it up to roll again. What are the odds of rolling Spiderman? This one’s easy. You have 3 energy faces and 3 character faces. You want the character, so 3 character faces divided by 6 total faces is 50%.

Our brains love this, and understand this. Rolling the character side on Spiderman is 50%.

At this point, our brains want to kick in, and say 50% again. Unfortunately now, our brains have made some poor choices. The actual answer is 75%. Before you roll any dice, you have a 75% chance to get a character face on Spiderman. (And, of course, the odds are the same on any regular non-Sidekick character, not just Spiderman.)

Let’s find out why it’s 75%. To do this, we are going to have to get a little math-y. Don’t worry, the numbers are easy, don’t run from them.

To try to make things easier to understand, let’s refer to our initial roll as “Roll A”, and then our reroll as “Roll B”. Now, let’s build a table to show all the potential outcomes for our turn, while we roll Spiderman. 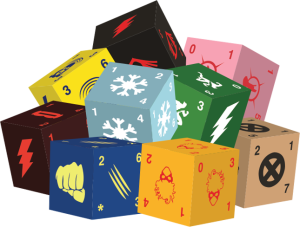 There are the 4 possible outcomes of our rolling. Now, hopefully, you are screaming something at me through your computer. “Curt! In III and IV, why are you rolling your character faces again! That’s crazy. Curt, you’re crazy!”

Wow, I can actually hear you. Weird.

And, of course, you are right. I would be crazy to roll those, because I WANT the character face on Spiderman. The reason that is in the table is because I want everyone to see that there are 4 possible things that can happen, if we just did everything totally randomly. There is one thing stopping us from rolling those character dice. Back to the rescue is our brain. Our brain tells us not to roll those, so let’s look at the amended table with our brain’s help.

Now, each of those lines has the same probability of happening, because we are using our Spider-Man die. If we had a Sidekick die instead, the math would be a lot different. Do you know why?

If you said “Because Sidekicks have 5 energy faces, not 3, and only 1 character face, not 3”, then you would be right.

But, lucky for us, our Spider-Man die has 3 energy faces, and 3 character faces, so now the math is super simple. If you have 4 events, and each is equally likely, what is the probability of each event? Simply put, it’s ¼, but if you hate fractions, we can call it 25%. So, now our math problem is really just counting which lines from the table we want, and multiplying by 25%.

So, when you draw that Spiderman die from your bag, and you stare at it, you are staring at a world of possibilities. With your 2 rolls, you have a 75% chance to get a character face.

Good luck with your turn, and next time, we’ll go a little deeper. What were the odds you were even going to draw Spiderman from your bag in the first place?

About the Author: Curt Hnatiuk

While Curt was born in Canada, he’s had the opportunity to live in many different places, including a few in the United States. His two favorite places have been Texas and St. Louis, so you know he loves good Bar-B-Que. As a long time gamer, and fan of the Marvel Universe, he just had to pick up Marvel Dice Masters when it came out. His love for the game comes from the fact that it isn't over until the last life point is gone. Many games can be turned around with just the right play.