Some people have picked up Marvel Dice Masters: The Mighty Thor with one thought: “It’s hammer time!” However, you might be enjoying some of the other characters in the set – like Crystal of the Inhumans. Lots of people are going to find Crystal: Aerokinesis to be a useful card. Today we wanted to highlight some fun team building options for you to experiment with when playing against your friends! 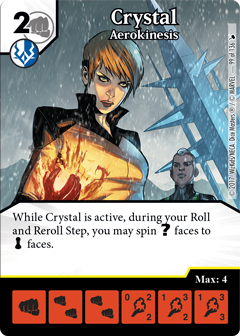 With twice as many Sidekicks as you’d normally get, what should you do with them? Jubilee: Mallrat is one of the most competitive options. Each time you field a Sidekick, you’ll get to deal 1 damage. As a 2-cost Bolt character die, Jubilee could easily be the first die you purchase in a game – maybe right alongside Crystal. 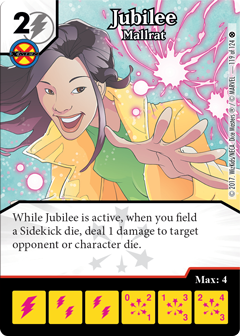 There’s still a limit on the number of Sidekick dice you’ll be rolling, as character faces or otherwise. But what if you could use your opponent’s Sidekick dice too? Doppelganger: Living Fractal is a card that would let you do exactly that. Anytime your opponent rolls the character face on a Sidekick die, you’ll get to temporarily steal it and field it. This not only triggers Jubilee, but potentially gives your opponent one less die to manipulate during their turn, and gives you (potentially) an extra blocker. 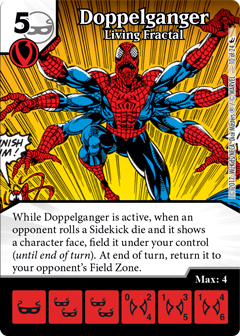 Leaving your opponent with a bunch of Sidekicks in the Field Zone (from Doppelganger returning them) seems like it might be bad for you. Maybe they’re blockers, or maybe you’ve just thinned out your opponent’s bag for them. If you’re worried about this, you could include Zatanna: Inverted Incantations on your team. Her Synergy ability will reroll all of your opponent’s Sidekick dice, with two additional benefits. Usually they won’t stick in the Field Zone, but sometimes they’ll even turn into more damage to wear down your opponent’s life total. Even better – those Sidekicks aren’t KO’d so your opponent won’t get to roll extra dice during their next turn. Unfortunately, if you’re using Crystal to turn wild energy (?) into Sidekicks, Zatanna may be harder to take advantage of than normal. 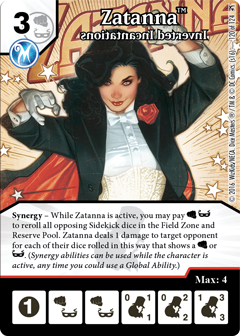 Knocking down your opponent’s life total in bits and pieces from Jubilee and Zatanna is fun, but it may not be fast enough for you to win the game. Sometimes you’ll need a big bruiser to close things out. You might need someone to fix this problem and smash your opponent. As you’ve probably guessed, it’s Mr. Fixit: Muscle for Hire. He’s got high printed stats, but it’s his ability that can really make him huge. It’s easy to deal him a few damage with Jubilee and get his attack to be more than 20. 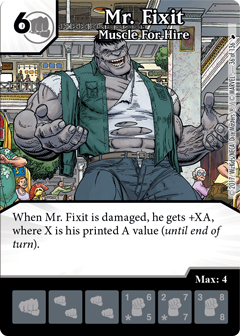 Your opponent is likely to block Mr. Fixit if he’s going to make them lose. Sometimes though, you might be able to sneak him past them – then after they don’t declare blockers you can make him big with Professor X’s Global Ability. The Global will let you field a Sidekick die, Jubilee will damage Mr. Fixit, and then he’ll be big enough to let you win. This trick probably only surprises your opponent once though!

Unfortunately, your opponent can block Mr. Fixit pretty easily (even with just a single Sidekick of their own). Luckily, we’ve got an answer for that – Mary Jane: MJ. When fielded, she’ll let you give Mr. Fixit Overcrush, and your opponent will be in for a world of hurt. 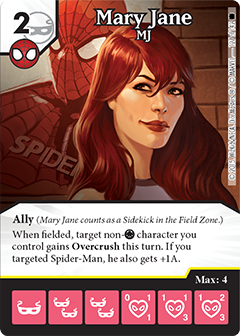 So far that’s 6 of the 8 spots on our team. There are several ways for us to close out the game or threaten our opponent. It’s worth noting, having multiple ways to damage our opponents improves our resilience against cards like Shriek: Sonic Beam. Now the question becomes: how can we make it go faster? Way back in the Marvel Dice Masters: The Uncanny X-Men, there was a great tool known as the Professor X Global, or “PXG”. Now, in The Mighty Thor, we see this Global Ability again (slightly modified) on Heimdall: The All-Seeing. For the cost of 1 [MASK], we can get 2 Sidekick dice to roll next turn. This will give us more chances to roll Sidekicks for Jubilee and Crystal, or get enough energy to purchase Doppelganger or Mr. Fixit. It also lets us churn through our bag faster for fielding Mary Jane. Hooray for the new “HXG!” 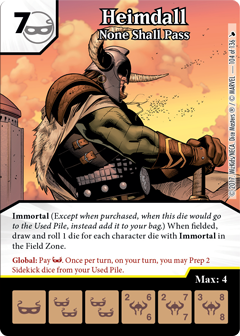 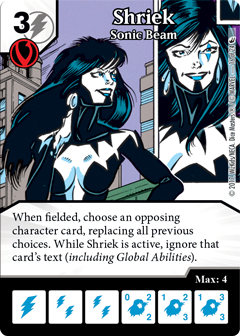 With Heimdall winning spot #7 on our team, there’s only one spot left. There are 3 similar options you can take advantage of to achieve the same end – protect Mr. Fixit from Global Abilities. It’s tough to say who the best bet is. You might have Wrecker: Enchanted Crowbar since he’s in The Mighty Thor, but Nocturne: T.J. and Wonder Woman: Child of Clay are good options too. 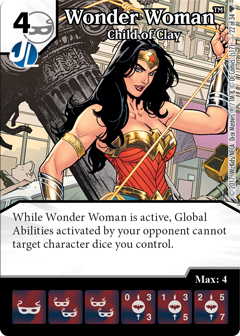 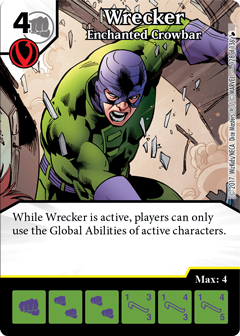 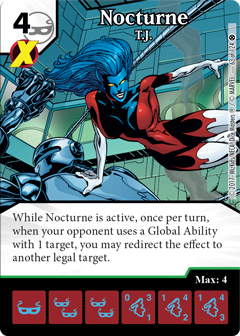 Half of this team costs 3 or less to purchase. Big Entrance is a great Basic Action Card to include on such a team. It’ll even be useful as energy late in the game to pay to field your character dice. 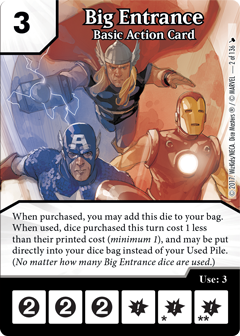 If you’re looking to take advantage of another Basic Action Card from The Mighty Thor, look no further than Midgard. Since you’ll be fielding a ton of Sidekicks, this die will let you take advantage of them by letting you Prep extra dice for the future and field meaningful character dice now. 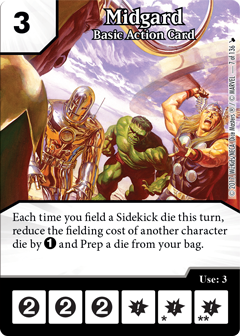 There are TONS of options for which Basic Action Cards you could pair with this team – part of the fun will be discovering which ones fit your playstyle best! One of the advantages about using these 2 BACs is that your opponent won’t be able to use them to stop your game plan.

This team is a lot of fun – but soon we’ll take a look at taking Crystal and Jubilee for a more competitive spin. Until next time, keep rolling!