We’re back with more Star Trek: Attack Wing previews. Today, we delve into the last of the cards from the Mirror Universe – The Kelvin Timeline Faction Pack, all of which have exquisite, high-resolution art from the most recent and most visually stunning Star Trek movies! For those of you who haven’t joined us for a Faction Pack preview, a Faction Pack a bigger Star Trek: Attack Wing product configuration that includes a pre-constructed fleet of four ships, everything you need to equip those ships, and more! The cards featured in faction packs tend to be all-new cards that expand an existing faction and push the boundaries of Star Trek: Attack Wing to new distances that even Q never thought imaginable! 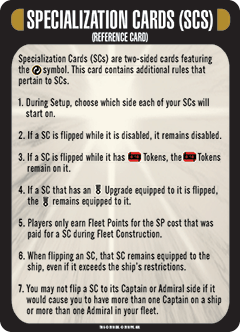 With an understanding of what Specialization Cards are, we now move on to the meat of this preview article starting off with the generic version of the Constitution Class (Kelvin) and the Warbird Class!

The generic Constitution Class (Kelvin) comes in at 24 SP as a dual-faction Federation and Mirror Universe ship. It has a Primary Weapon Value of 4, an Agility Value of 1, a Hull Value of 6, and a Shield Value of 3. It boasts the Evade, Target Lock, Scan, and Battle Stations Actions. Its Upgrade Bar has 1 Tech slot, 1 Weapon slot, and 2 Crew slots. For 24 SP, this is surely a fantastically sturdy vessel that’ll be hard for any opponent to take down easily! 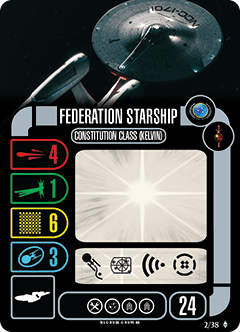 On the Klingon side of things, the generic Warbird Class clocks in at 17 SP as a dual-faction Klingon and Mirror Universe ship. It’s got a Primary Weapon Value of 4, an Agility Value of 1, a Hull Value of 4, and Shield Value of 2. It has a pretty unique Action Bar that contains the Target Lock, Battle Stations, Cloak, and Sensor Echo Actions, giving this ship access to a blend of offensive and defensive capabilities. Its Upgrade Bar also contains 1 Tech slot, 1 Weapon slot, and 1 Crew slot, further proving the deadly versatility of this ship. 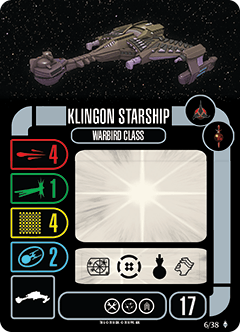 Moving on, we have the inimitable Christopher Pike making his first appearance as an Admiral in Star Trek: Attack Wing! As a Captain, Pike costs 5 SP, is Mirror Universe unique, has a Captain Skill of 8, has 1 Elite Talent Upgrade slot, and is dual-faction Federation and Mirror Universe. His abilities allow him to add a Crew slot to the ship he’s on and give him access to an Action that allows him to flip up to 2 Specialization Cards equipped to his ship. On his Admiral side, the only things that change are his 8 Captain Skill turns into a +2 Captain Skill and his Action becomes a Fleet Action. Used in conjunction with Specialization Cards in this pack and beyond, Pike will surely be of great use! 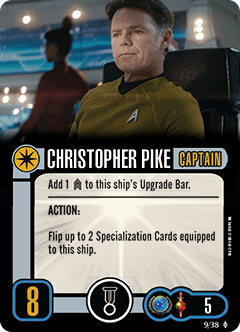 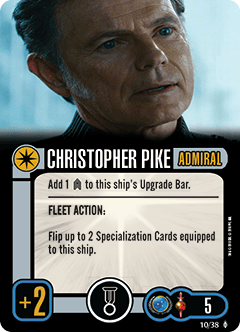 Next up, to compliment Pike, we have three of the Crew of the U.S.S. Enterprise, all appearing as Specialization Cards, starting with Bones! Both sides of Leonard McCoy are Crew Upgrades that are 3 SP, Mirror Universe unique, and dual-faction Federation and Mirror Universe. His first side features him as a cadet at Starfleet Academy and gives him two abilities. The first ability allows you to place 3 Time Tokens on Bones to prevent the captain of his ship from being disabled. The second one allows you to place 2 Time Tokens on him and the captain of his ship to prevent the captain from being discarded. Like always, McCoy is a great doctor who puts his patients before himself in times of need. The other side of McCoy features him aboard the U.S.S. Enterprise, and, essentially, lets him smuggle in a Crew Upgrade with a printed cost of 4 SP or less in secret. Then, during the Activation Phase, you can flip the Crew Upgrade he’s hidden face up and equip it to his ship. However, you’ll have to put 3 Time tokens on the newly revealed Crew Upgrade to do so! 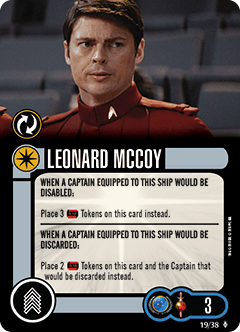 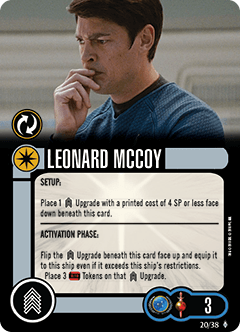 Following McCoy, we have the young navigator, Pavel Chekov. Both sides of Chekov are Crew Upgrades that cost 2 SP, Mirror Universe unique, and dual-faction Federation and Mirror Universe. The first side features Chekov in his yellow shirt and an ability that allows you to place 3 Time Tokens on him during the Activation Phase to Remove an Auxiliary Power Token beside his ship. Sometimes having an Auxiliary Power Token next to your ship can really put a damper on your plans for a turn. Chekov helps you out by removing that Auxiliary Power Token before your ship moves or performs its Action, allowing it to move and act freely! The second side of Chekov has a more combat-oriented ability. This side lets you place 3 Time Tokens on him during the Combat Phase to target an opposing ship within Range 1-2 and remove a Scan Token beside the target ship. If your opponent is depending on that Scan Token for its own effect or to activate a more powerful one, Chekov swipes the token away for very little cost. 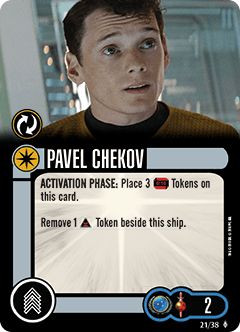 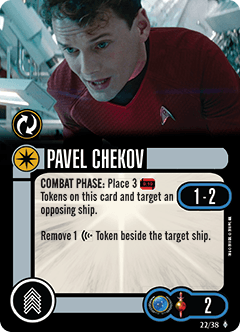 Last but not least, Nyota Uhura, the famous communications officer of the U.S.S. Enterprise! Both sides of Uhura come in at 3 SP, are Mirror Universe unique, and dual-faction Federation and Mirror Universe. Her first side lets you take any face up Communications Failure damage cards on this ship and discard them. Not only do you get to ignore the effect, but you get to get rid of a damage to your ship! The other side of Uhura features an ability that activates during the Activation Phase by placing 3 Time Tokens on her and targeting her own ship or a friendly ship within Range 1-2. All the Upgrades equipped to the target ship have their Range increased by 1. Have an Upgrade with a measly Range of 1? Extend it to 2 with Uhura! 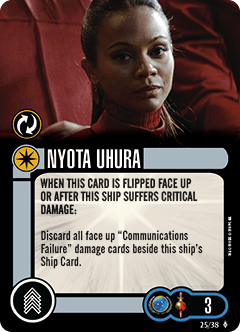 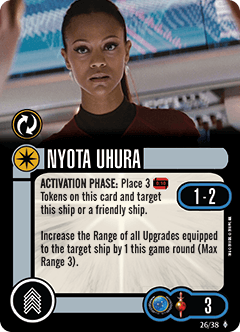 That’s it for Crew Upgrades! Next up, we have the Kelvin Timeline version of the Klingon Photon Torpedoes. This Weapon Upgrade comes in at 3 SP, is not unique, and is dual-faction Klingon and Mirror Universe. This iteration of the Photon Torpedo can only be fired from a Secondary Firing Arc and has an Attack Value equal to the ship’s Primary Weapon Value +1. This Attack can be used at Range 1-3 by spending the ship’s Target Lock Token and placing 3 Time Tokens on this card. If the defending ship has no Shields up and isn’t Cloaked, you get to convert all Battle Stations into Critical Hits! Once you’ve taken out a ship’s Shields this card is sure to kill the ship or at least absolutely mangle it with an abundance of face up damage cards from the Critical Hits! 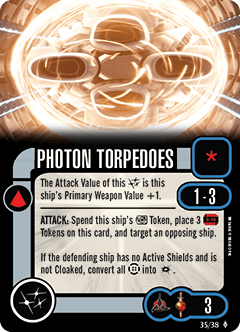 Now we have a very interesting Tech Upgrade that, unlike many of the other cards in this pack, flies solely under the flag of the Mirror Universe. Portable Transwarp Beaming Device is 3 SP and Mirror Universe unique. It allows you take a Crew Upgrade equipped to this ship that would be discarded and beam it over to a friendly ship within Range 1-3, and, instead of discarding that Crew Upgrade, you get to place a Time Token on it and keep it around. This card is tremendously useful for when one of your own effects or and opponent’s effect would discard a Crew Upgrade on your ship. You get to save the Crew and use it again later! 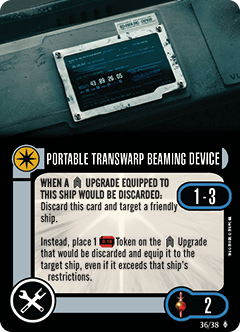 The last Tech Upgrade we have features non-other than Nero, the captain of the mining vessel from the future, the Narada. Integrated Future Technology comes in hot as a 3 SP, one-per-ship unique, Mirror Universe Tech Upgrade that has three separate abilities. Its first ability gets rid of the faction penalty for Romulan and Borg Weapon and Tech Upgrades on this ship. Then, it lets you hide a Tech Upgrade with a printed cost of 4 SP or less face down beneath. Lastly, during the Planning Phase, it lets you discard this card to flip the hidden Tech Upgrade beneath it face up and equip it to this ship. Yet another way to hide your devious plans from your opponent and employ them at exactly the right time! How much more Romulan can you get? 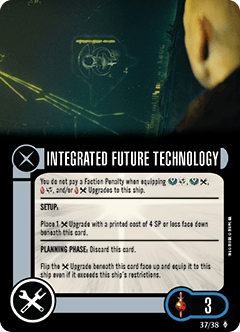 Now we’re going to do something a little different than other previews. We’re going to take a look at a Maneuver Card for the Warbird Class since it’s the first time it’s appeared in Star Trek: Attack Wing! At speed 4, this ship can only perform a White Straight. At speed 3, its options open up tremendously with Red Left and Right Turns, White Left and Right Banks, a White Straight, and a Red Comeabout. At speed 2, its gets White Turns, Green Banks, and a Green Straight but loses its Comeabout. At speed 1 it loses its Turns, its Banks remain Green, and its Straight remains Green as well! 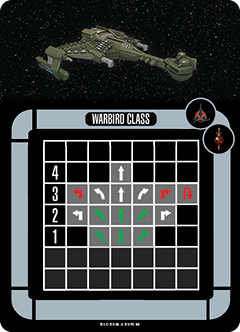 Last, but certainly not least, we’re going to look at one of the two Missions in this faction pack: A Lightning Storm in Space. This Mission requires 2 players, a Planet Token, and 10 Mission Tokens. The story behind this Mission is that a temporal distortion has been discovered nearby and you, as an Admiral, must go and investigate this distortion, alongside a fleet from a neighboring power, when hostilities break out! 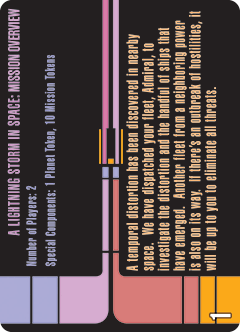 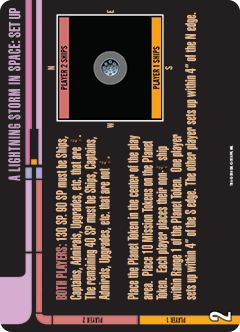 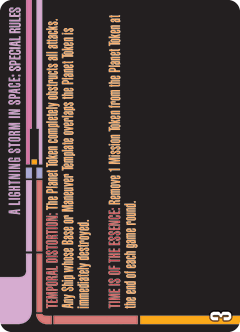 That’s all for today, folks! This new Mirror Universe Faction Pack introduces two ships that are new to Star Trek: Attack Wing, an all-new game mechanic with Specialization Cards, and a plethora of other new game content! There is so much to be excited about with this faction pack! We truly hope you enjoy playing with everything in it as much as we enjoyed creating it for you.

Be sure to contact your local friendly game store to let them know that you want to order the new Star Trek: Attack Mirror Universe Faction Pack – The Kelvin Timeline. All this exciting content and more is included in each Faction Pack for the low MSRP of $29.99.  Be sure reserve your faction pack today and keep an eye out for other new products coming soon!