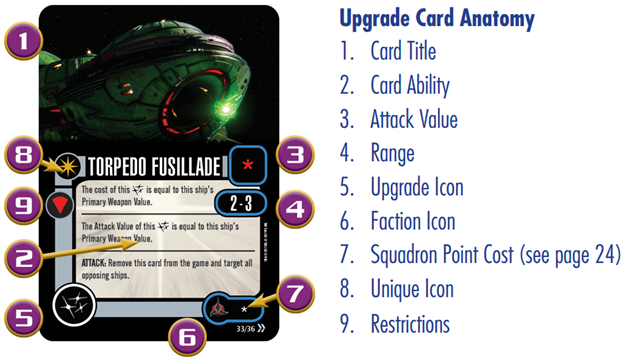 Most people are familiar with the regular unique symbol

and the Mirror Universe unique symbol

. The normal unique symbol is a black background with a yellow star. For Mirror Universe, the color of the background and star are reversed, allowing a player to play two upgrades with the same name; one from the Prime and one from the Mirror Universe. Until now there’s only been a symbol to determine if a card is unique or not. If a card was otherwise restricted based on faction, ship class, or limited to one per ship, it was codified in the card’s text. This often made for long, unwieldy blocks of text on cards. In an effort to make a card’s text more manageable and to simplify restrictions and uniqueness, we’ve made a few changes to how card’s are laid out.

Going forward, if a card is limited to one per ship, there will be a silver four-pointed star on a black background in the same spot where the unique symbol would appear

. This will replace large, unnecessary blocks of text and allow players to easily decipher if a card is unique, Mirror Universe unique, or one per ship by looking in the same part of the card.

Additionally, most other card restrictions will now be displayed on the left edge of the card instead of being written out. If a card is restricted to ships of a specific faction, that faction’s symbol will appear in a circle

. For Elite Talent upgrades that are restricted to a captain of a specific faction, the circle will be changed to a rounded square like the one that surrounds a Captain’s Captain Skill

. If a card is restricted to ships of a given class, then the symbol for the ship class, that appears in the lower left corner of the ship card, will be featured in the circle

. Some cards are also restricted based on a given ship’s Primary Weapon, Agility, Shield, and/or Hull Values. If a card is restricted to a ship with a Hull Value of four or more, the card will display a circle with the Hull symbol with “4+” superimposed on it

. Similarly, if a card is restricted to 4 or less Hull, the card will display a circle with a Hull symbol and “4-“ superimposed on it

. This logic follows suit for the other values as well. Another restriction that was previously written out that will now be codified with a symbol are arcs that the effect may be used out of

. There are symbols for Primary Firing Arc, Secondary Firing Arc, and 360 Firing Arc. A more detailed, non-exhaustive list of restriction symbols can be found in the new rulebook on page 20.

Unfortunately, not everything can be so easily codified. For now, if a card is restricted in a way that cannot simply be codified by a symbol, that restriction will be spelled out in text. For example, a card that can only go on the U.S.S. Enterprise-D or an Elite Talent Upgrade that can only be equipped to a Gorn Captain.

The new card text layout helps to standardize card text and clearly delineates the parts of a card’s text. If a card references a single range, that range is displayed as it has previously been on Weapon Upgrades. If a card references more than one range, those ranges are specifically referenced in text. If a card has more than one effect, those effects are delineated with a horizontal rule. Most importantly, complex effects have three clear parts: timing, costs & conditions, and effect. Let’s take a look at a card that highlights many of these pieces. 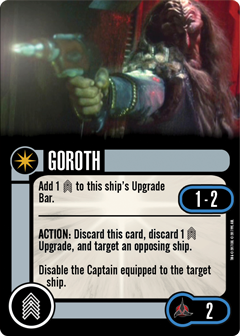 Goroth has two effects, delineated by a horizontal rule, a Range of 1-2, and an Action that is broken up by timing, costs & conditions, and effect.

Disable the Captain equipped to the target ship.”

These effects are clearly different and do not interact with each other.

The Range of 1-2 displayed on this card tells you what range this card’s effect can be activated at. Specifically, Goroth can only target an opposing ship within Range 1-2.

Let’s now take a look at the different parts of Goroth’s Action.

The timing of a card is always bolded and in capital letters. In this case ACTION: tells us that this card is an Action and may only be used when an Action could be used (i.e. after a ship moves during the Activation Phase).

Once the timing and conditions have been met and the costs have been paid for, the effect resolves. The effect of Goroth’s Action is “Disable the Captain equipped to the target ship.”

The addition of clearly delineated effects, range, and further breaking down a card’s text into pieces allows for much clearer, easier to understand card text instead of clunky card text that is often ambiguous or hard to understand.

We hope that these changes to how cards are laid out serve to increase the readability of Star Trek: Attack Wing cards going forward and allows all of our players to read and understand cards without ambiguity or doubt.

Oof. Sorry to cut this short, but I’m not feeling so great. I better head down to sickbay to get checked out by our new state-of-the-art Emergency Medical Hologram. Be sure to stay tuned for the last transmission which will discuss perhaps the biggest change to Star Trek: Attack Wing: The Rule of 3!