This May, WizKids/NECA will launch the second of a three-part Star Trek: Attack Wing Storyline Organized Play event based on the classic Star Trek Films. This highly anticipated release will feature elements from Star Trek’s most beloved movies continuing with Star Trek III: The Search for Spock.

The scenario for the Star Trek: Attack Wing – The Classic Movies – The Search for Spock event revolves around the Genesis Planet as seen in The Search for Spock. The planet is growing very rapidly and you have sent an away team to study it. While the away team is on the planet, your fleet is set upon by an enemy fleet who has sent its own away team to the planet’s surface. Can you retrieve your away team before the volatile planet or the enemy’s away team destroys them?

At the start of the game, during the Gather Forces step of Setup, each player must choose an additional 6 [Crew] Upgrades and place them in a stack next to his/her Ship Cards. These cards are members of your Away Team. While these cards are on this stack they are considered to be on the planet and cannot use any text abilities listed on the cards. These cards are in addition to the normal Fleet Build for this event, and the total SP for all 6 cards cannot exceed 24 SP. That means you have about 4 SP to spend per crew card on average but you can also mix and match trying to find the best Away Team that 24 SP can buy.

The Search for Spock scenario has the following Special Rules:

Any ship within Range 1-2 of the Genesis Planet may perform the following Action:

ACTION: If your ship is not Cloaked, disable all of your remaining Shields and then remove 1 of the members of your Away Team from the planet and deploy it to your ship, even if it exceeds your ship’s restrictions. Place 1 Mission Token beside your Ship Cards.

The volatile nature of the Genesis Planet may cause damage to your ships and/or your Away Team. At the end of each End Phase:

The game ends when one player is eliminated or the time limit is reached. At the end of the game, each player gains +5 Fleet Points for each Mission Token beside that player’s Ship Cards. The player with the most Mission Tokens beside his/her Ship Cards gains an additional +10 Fleet Points. 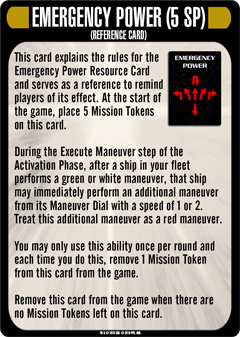 Every player who shows up and plays in this event gets a resource as a participation prize. The resource for month two is Emergency Power. This resource costs 5 points and allows you to place 5 Mission Tokens on the card. During the Execute Maneuver step of the Activation Phase, after a ship in your fleet performs a green or white maneuver, that ship may immediately perform an additional maneuver from its Maneuver Dial with a speed of 1 or 2. Treat this additional maneuver as a red maneuver. You may only use this ability once per round and each time you do this, remove 1 Mission Token from this card. Emergency Power is a great way to get extra maneuvers out of your ships which hopefully should result in superior positioning and tactics. 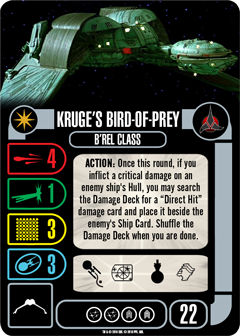 If you win The Search for Spock scenario, or you get the fellowship award, you will go home with the Kruge’s Bird-of-Prey Prize Pack. Kruge’s Bird-of-Prey is a B’rel Class ship that gains one Shield and one Weapon Upgrade slot compared to the generic version. The special ability on this ship allows you to search the Damage Deck for a “Direct Hit” damage card once per round if you inflict a critical damage on an enemy ship’s hull. While it costs an Action to perform, if you are successful, you will deal one additional [Hit] result to your opponent. The Klingons are already very damage oriented and this special ability helps to make sure that you maximize the damage you inflict on your enemies. 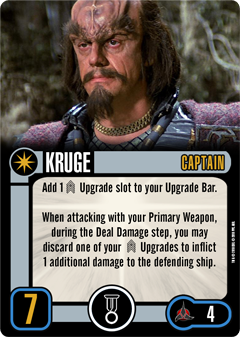 Kruge is the Captain in this Prize Pack.  A skill level 7 Captain, Kruge adds 1 Crew Upgrade slot to your Upgrade Bar. In addition, while attacking with your Primary Weapon, you may discard one of your Crew Upgrades to inflict 1 additional damage to the defending ship. If sacrificing a crewmember means that he can do extra damage, you can be sure Kruge will do it without hesitation or remorse. 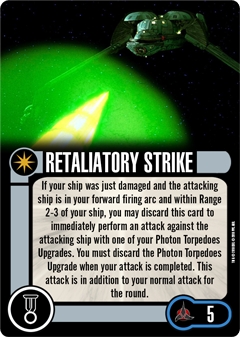 Retaliatory Strike is an Elite Talent that perfectly reflects the Klingon Philosophy of Battle: If you strike me, I shall strike you back. If your ship was just damaged and the attacking ship is in your forward firing arc and within Range 2-3 of your ship, you may discard this card to immediately perform an attack against the attacking ship with one of your Photon Torpedoes Upgrades. You must discard the Photon Torpedoes Upgrade when your attack is completed. This attack is in addition to your normal attack for this round. Make sure to load your Photon Torpedoes and make your enemies think twice before they dare attack your ship. 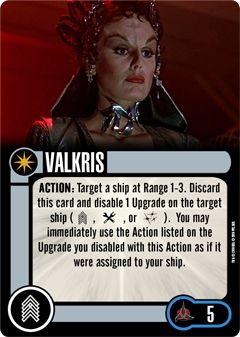 Valkris is one of three Crew Upgrades you will find in this Prize Pack. As an action you may target a ship at Range 1-3. Discard this card and disable 1 Upgrade on the target ship (Crew, Tech, or Weapon). You may immediately use the Action listed on the Upgrade you disabled with this Action as if it were assigned to your ship. 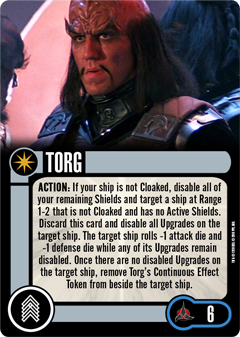 Torg is a Crew Upgrade that allows you to disable all the Upgrades on an enemy ship that is not cloaked and has no active Shields within Range 1-2. While any of those Upgrades remain disabled the target ship rolls -1 attack and -1 defense die. Such a powerful effect does come at the cost of an Action plus disabling your own remaining Shields. This Upgrade will be very useful against opponents who are relying on a large number of Upgrades, which should give you several turns of Torg’s continuous effect reducing both attack and defense dice. 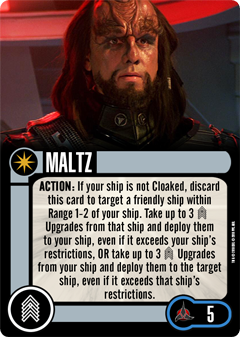 You will want to make sure you reserve your spot for this event early by contacting your nearest local game store. Build your best fleet and test your skill and cunning against other players to see who can survive the Genesis Planet.