The Mirror Universe is filled with surprises, including the I.K.S. Toh’Kaht in the new Star Trek: Attack Wing Blind Booster Pack.

This October Star Trek: Attack Wing Organized Play Events will feature a series of ten blind reinforcement boosters to be used during events held over the next year. To prepare you for what you will find inside these blind boosters, let’s take an in-depth look at the ships, continuing with the Vorcha Class, I.K.S. Toh’Kaht. 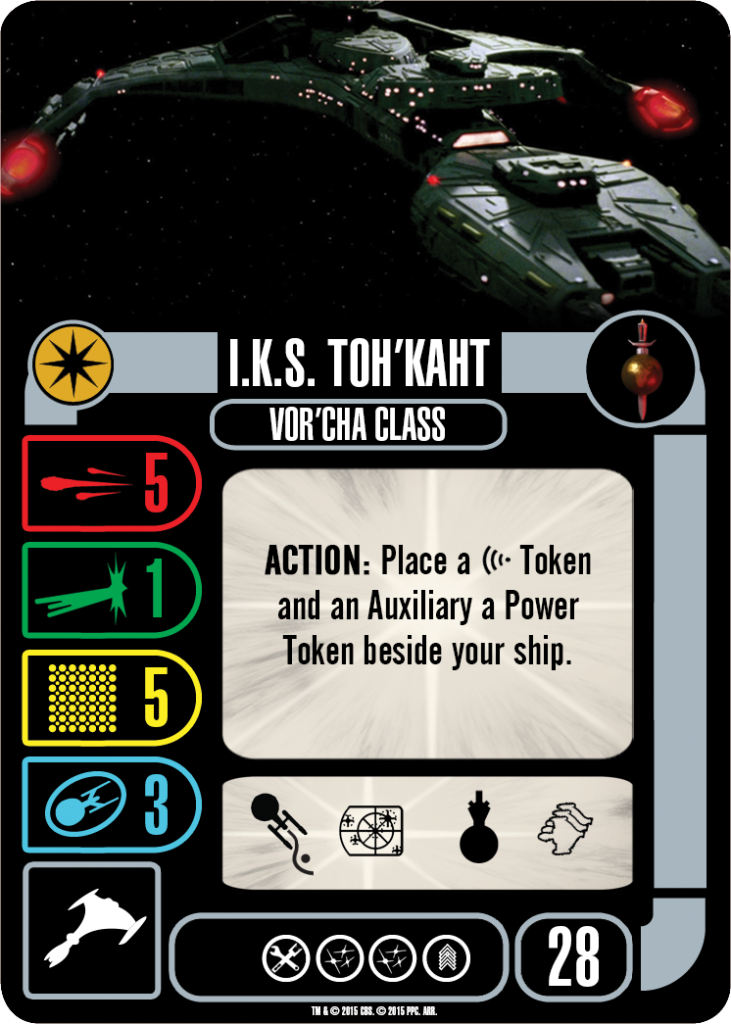 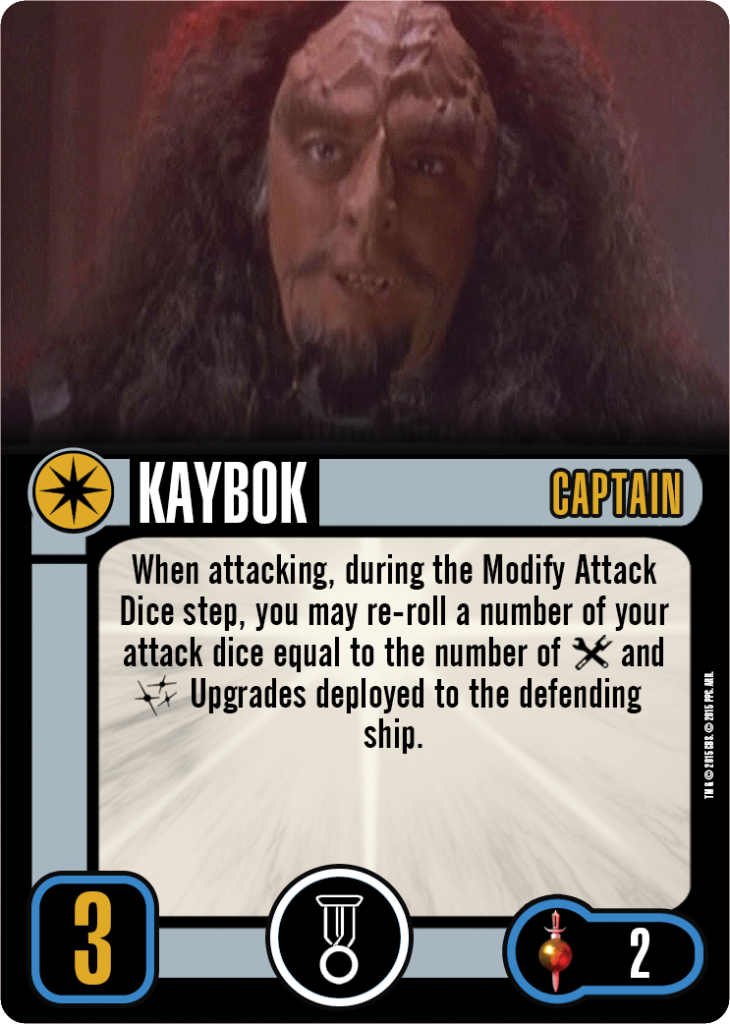 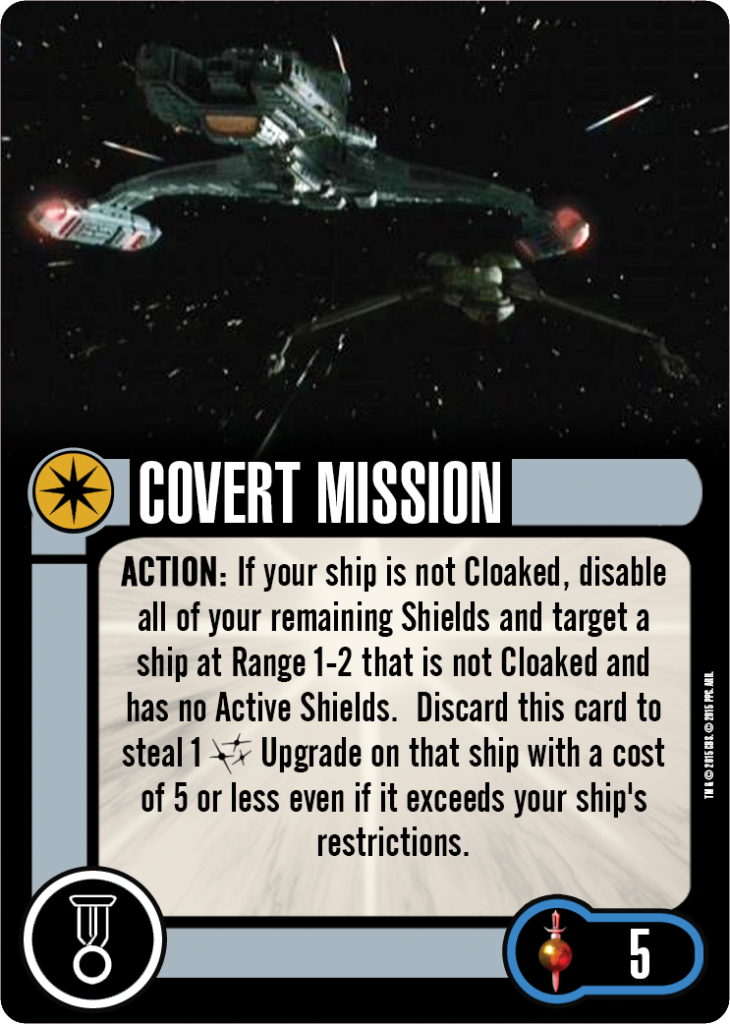 The I.K.S. Toh’Kaht is a powerhouse for 28 SP featuring a 5 primary weapon value, 1 agility, 5 hull and 3 shields. The Action Bar contains Evade, Target Lock, Cloak and Sensor Echo Actions. The ability to cloak and sensor echo is what makes the Vor’cha class ship so dangerous. The generic version of the ship loses a shield and a Weapon Upgrade slot for 2 less SP. The I.K.S. Toh’Kaht has a special ability that allows you to take an action to place a Scan Token and an Auxiliary Token beside your ship. Since the I.K.S. Toh’Kaht normally lacks the Scan Action, being able to perform a Scan Action sets this ship apart from other Vor’cha class ships. Kaybok is a level 3 Captain that allows you to re-roll a number of your attack dice equal to the number of Tech and Weapon Upgrades deployed to the defending ship. Kaybok will make sure your attacks find their mark, especially against ships with lots of Tech and Weapon Upgrades. The Elite Talent Upgrade in this blind booster is Covert Mission. As an action, you may disable all of your remaining Shields and target a ship at Range 1-2 that is not Cloaked and has no Active Shields. Discard this card to steal 1 Weapon Upgrade on that ship with a cost of 5 or less. 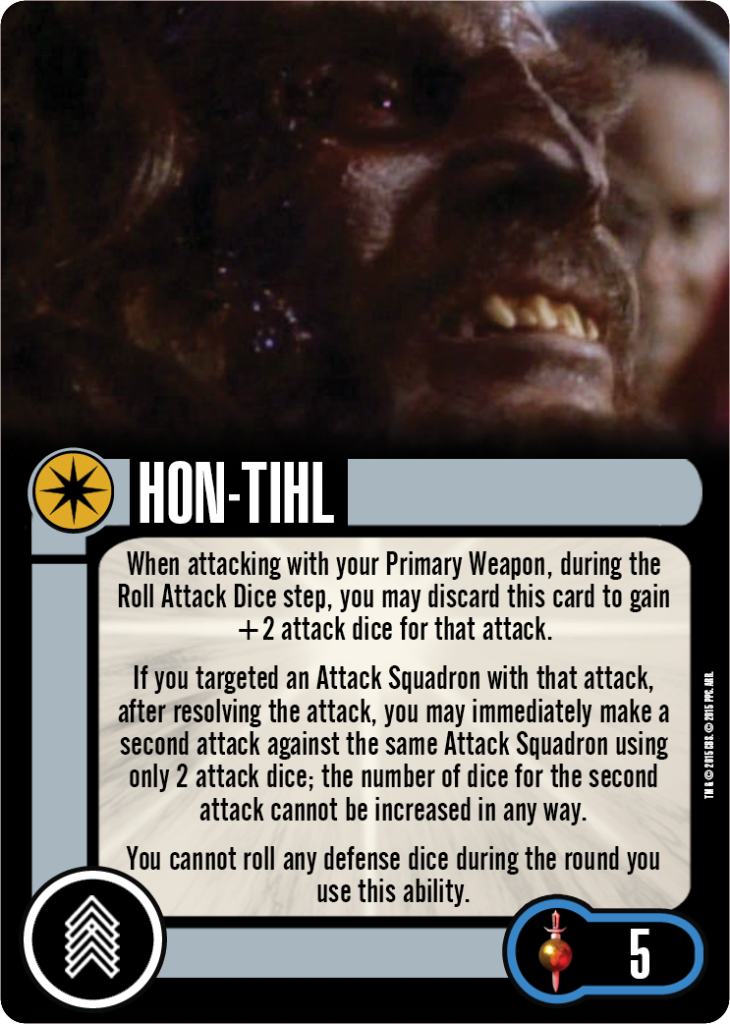 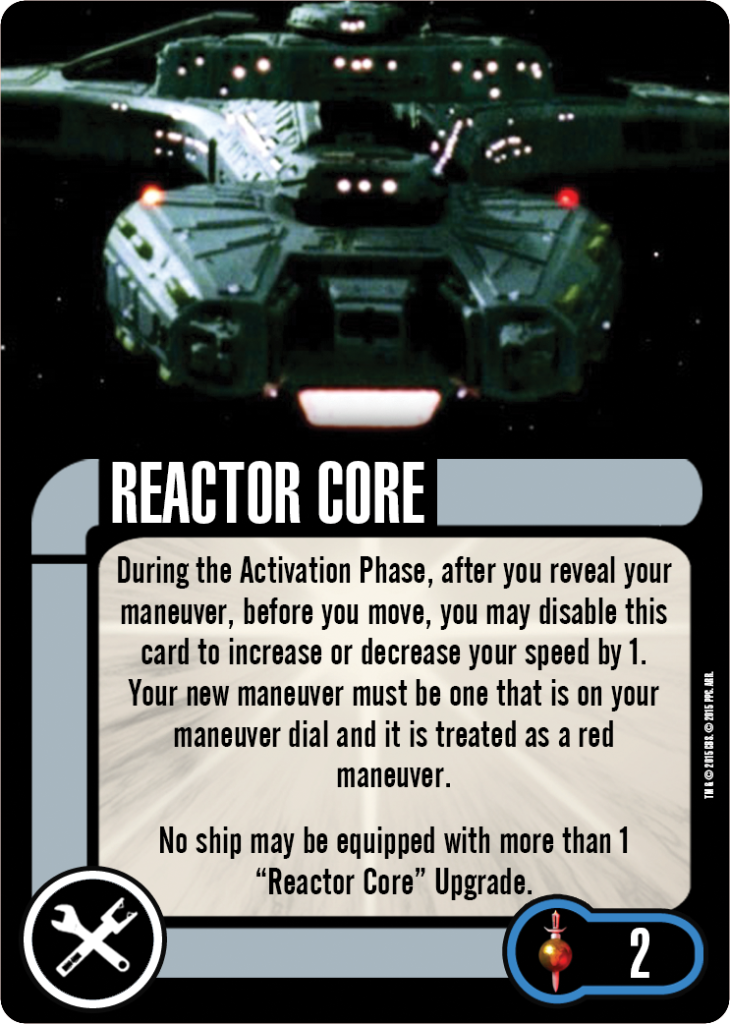 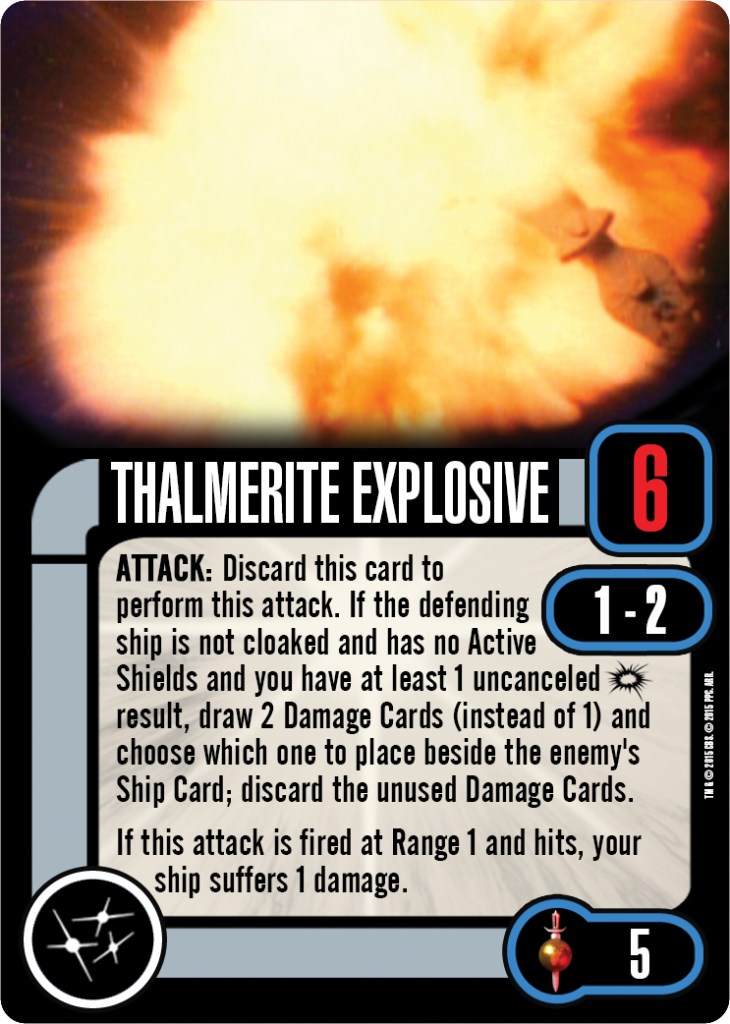 To keep things balanced, most ships in the blind reinforcement booster packs come with one Elite Talent, one Crew Upgrade, one Tech Upgrade and one Weapon Upgrade. The Crew Upgrade in this pack is Hon-Tihl. When attacking with your primary weapon you may discard this card to gain +2 attack dice for that attack. If you targeted an Attack Squadron with that attack, you may immediately make a second attack against the same Attack Squadron using only 2 attack dice. Hon-Tihl is a great option to use against Attack Squadrons who normally only take one damage per attack. Adding Hon-Tihl to your ship allows you to take a second attack against the Attack Squadron and hopefully will remove another token from the Attack Squadron. Reactor Core is a Tech Upgrade that allows you to increase or decrease your speed by 1 by disabling this card. Your new maneuver must be one on your maneuver dial and it is treated as a red maneuver. Finally, Thalmerite Explosive is the Weapon Upgrade in this pack. Thalmerite Explosive is a volatile explosive and if fired at range 1 and hits, actually damages your own ship! Otherwise you may discard Thalmerite Explosive to roll 6 attack dice against an opposing ship within range 1-2 of your ship. If the opposing ship is not Cloaked, has no Active Shields and you have at least 1 un-canceled Critical Hit result, draw 2 Damage Cards (instead of 1) and choose which one to place beside the enemy’s Ship Card.

Players will enjoy this blind booster, because it expands on the Mirror Universe Faction, with new upgrades and provides powerful options for fleet building in the future. Specifically, players have wanted another Vor’cha class ship ever since the first one appeared in the Starter Set. Also, the Anti-Squadron Upgrades will make this blind booster very popular. As such, this iconic and powerful ship will make a welcome addition to anyone’s fleet. 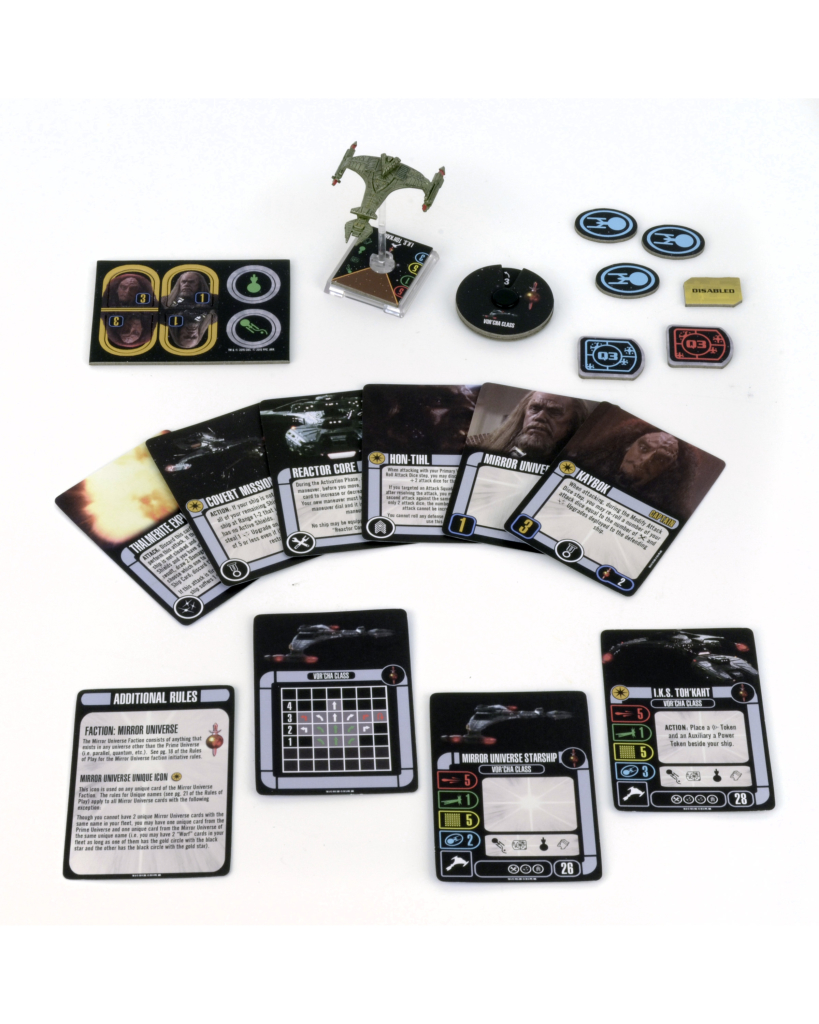