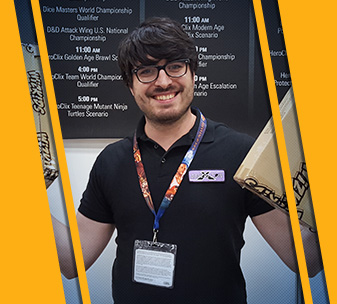 Q. How does it feel to have won the Dice Masters World Championship?
A. It’s great. I prepared for the tournaments and I wanted to have a good performance at Worlds, but winning the whole championship is more than I expected.

Q. Did you enjoy the competition?
A. Yes, I had a great time playing during the weekend. The level of the competition was high and it is always good to compete in a convention environment. But what I enjoyed most, was spending time with the community. This game has a great community of players that are friendly and easy going, which makes it easy to have fun with the game.

Q. How long have you been playing Dice Masters?
A. I started around one and a half years ago. When the Marvel Dice Masters: Uncanny X-Men set was released in Spain. I started playing casually with my wife and some friends, but soon after, we liked the game so much that we started attending store tournaments.

Q. How did you come up with your winning team?
A. I’m part of the Escudos y Comparsas Team, some of the team members went to Paris to compete in the French Nationals. They all went with a Mask Ring team and their performance there was great. I took the core of that team and changed the Ring from DC Comics Dice Masters: War of Light for Half-Elf Bard from Dungeons & Dragons Dice Masters: Battle for Faerûn. I made that change because historically, I feel more confident playing aggressive teams and Bard allows for a fast way to win the game.

Q. What did you like about your team?
A. What I liked most about my team is the flexibility; I can go for a control strategy with characters like Oracle and Constantine or go for a more aggressive approach with Elf Thief and Bard.

Q. What would you have changed?
A. Looking at the teams I faced during the tournament, I think Black Widow: Mistress of Pain. Her ability to block multiple characters can help a lot during the game and her low cost makes her easy to buy.

Q. What were the keys to your success/ what was your main strategy?
A. I owe this title to the guys that practice with me, the Escudos y Comparsas Team. We spent many hours playing with each other and trying different strategies to find the best team and to improve our performance with those teams. I think the key to my success was all of the hours spent practicing, along with a lucky Saturday (don’t forget that luck is a big part of every game). During the games my main strategy was to be aggressive when facing control teams and to switch to a control role when against aggressive teams.

Q. How much did you prepare for the event?
A. As I mentioned before, I spent the last 2 or 3 weeks testing with my team. We spent many hours playing and analyzing the different possible teams that we thought we would find at the tournament. I travelled with Sito who qualified after winning the French Nationals. Since we had to travel so long to reach Columbus from our homes, we prepared as much as possible to have a good performance.

Q. How do you feel about the current metagame?
A. There were 3 different teams that were very popular throughout Origins weekend; Mask Ring teams, Bard Teams and Vicious Struggle teams. People complain about Bard, but last year they complained about Hulk and two years ago about Gobby and Tsarina. There are always powerful cards that seem overpowered; Bard is a great card, but I think with so many people looking for a way to stop it, there will soon be a team that beats it. I think three top-tier teams and several other competitive options as Polymorph Hulk, Guy Rush and Sidekick based teams is a healthy metagame.

Q. Can you give any insights for new players on how to become a better player?
A. In my opinion, the best advice to being a good player is to enjoy the game. It is also very important to know that there is a great deal of luck in this game and to keep calm when things don’t go as expected. And the last piece of advice I have is to practice; the more you practice the more you will improve.

Q. Any shoutout or is there anything else you would like to add?
A. I would like to thank the WizKids team, the judges, and the support team. They were really helpful and friendly during the weekend and their work made for a great tournament. Thank you.