Hello HeroClix fans! Colossal figure strategies weren’t viable… until they were. Monster theme teams weren’t viable… until they were. Back in 2018 Tylor Spees was able to become the HeroClix World Champion utilizing a Monster theme team that mostly featured 2×2 characters. Plenty of players have jumped on board the Monster bandwagon since then, developing the archetype along the way. How will upcoming sets impact Monster teams? How will Modern Age Rotation 2020 impact these strategies? Are there any figures from X-Men the Animated Series that may have been overlooked in the months without a WKO? We’ve got those answers and more! 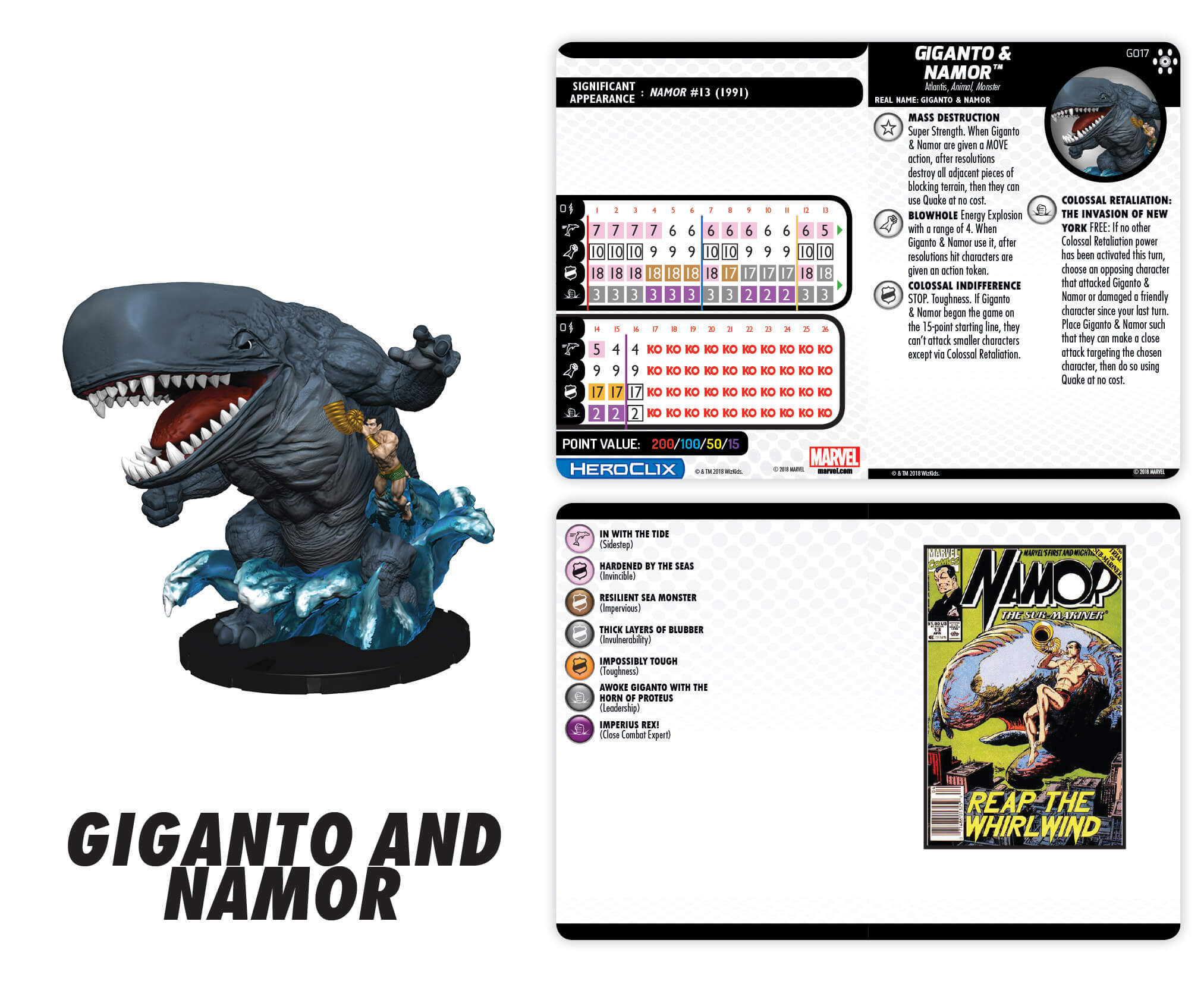 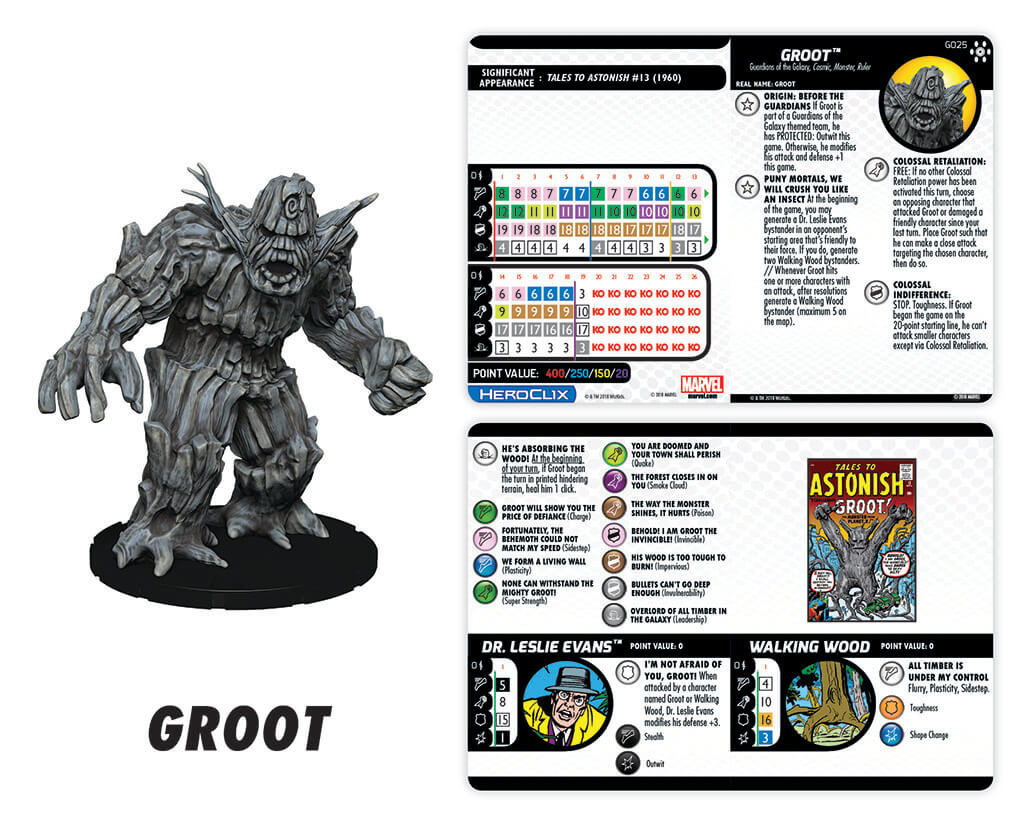 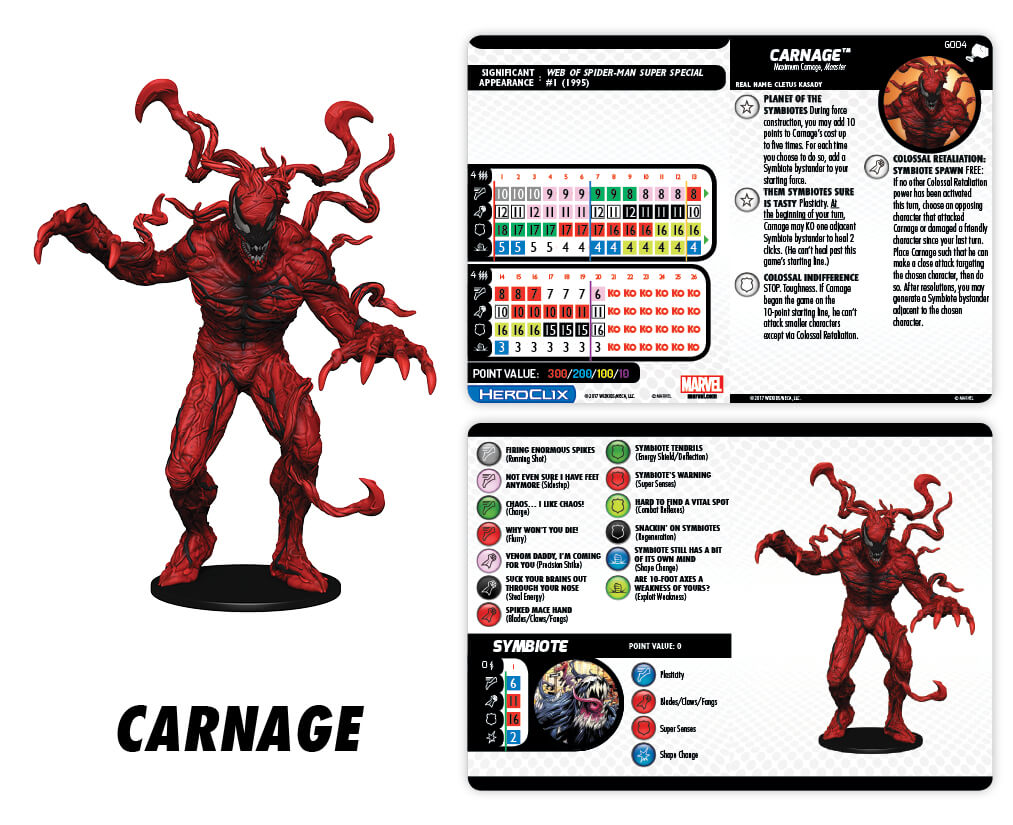 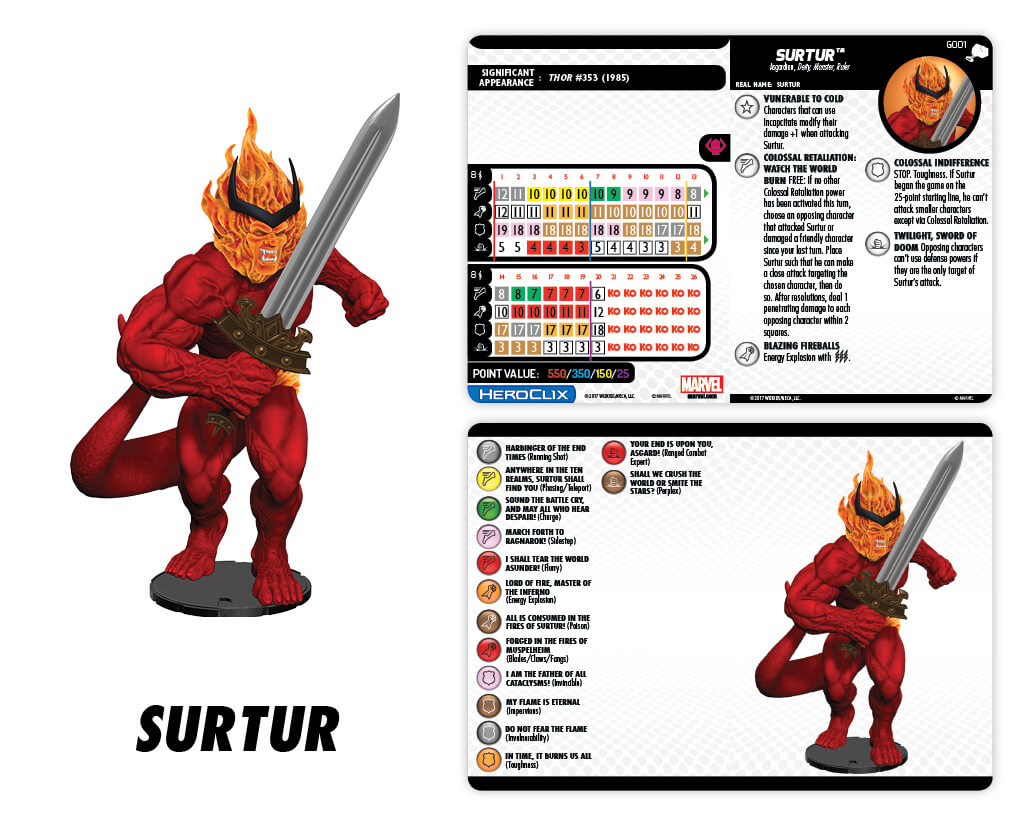 Tylor’s team makes use of various threats (Giganto & Namors, Surtur, Mini-Shredder) and ID call ins as practical bullets for important situations. By using STOP clicks, Mystical Worms, and a total of 8 characters on his team this team will get to take advantage of Colossal Retaliation, ID Cards, and Mini Shredder’s Shredder Elite.

One of the figures we got in X-Men the Animated Series is going to be a huge boon to a Monster Team. The Colossal Prime Storm (G023b) has four different options for inclusion on your force (300/225/150/25). While you might choose Storm to come in at 150 and be the cornerstone of your force, plenty of players will try to use her at 25 so they can leave room for other figures on their team and still get access to her amazing traits. Check out her card below if you’re unfamiliar with it: 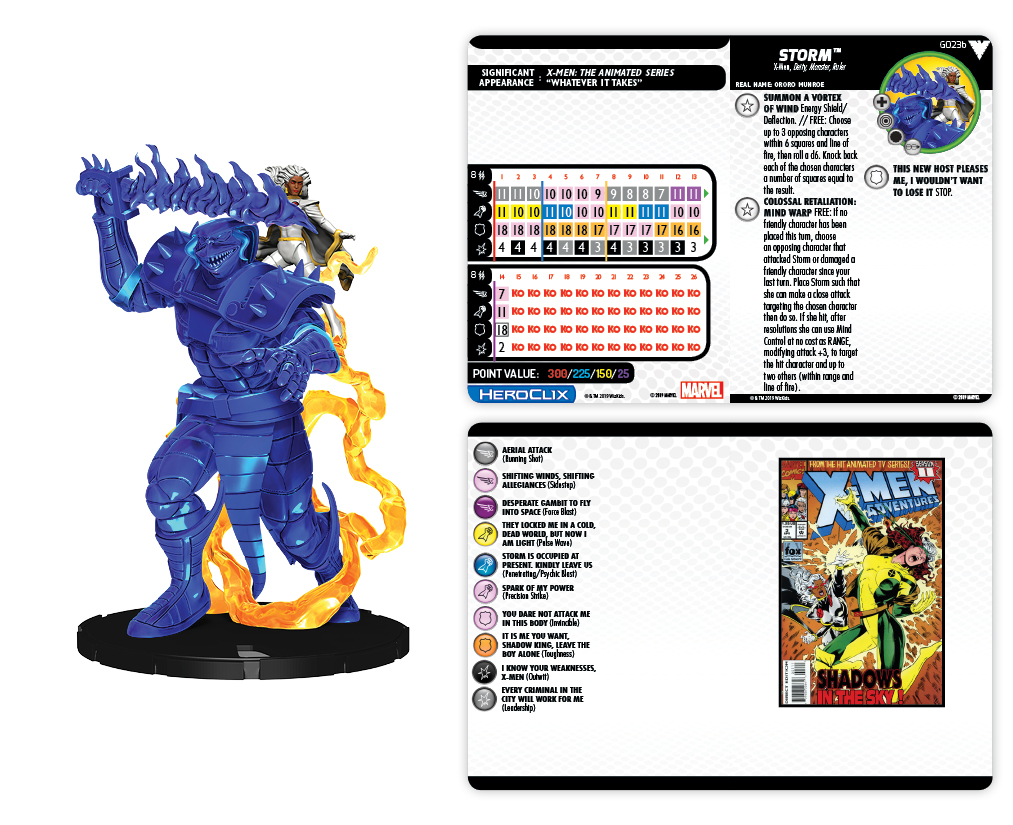 No matter what point level you field her at or if played main force or from the sideline, she can punish her opponent while also being able to control and disrupt play on the map. Her “Summon a Vortex of Wind” trait keeps her harder to hit from range with Energy Shield Deflection. For some perspective, if your opponent has a 12 attack, and Storm is on her last click (18 defense) this means ESD is changing their odds of hitting you from over 70% (most of the time) to about 40% (about 2 in 5). For an opponent with only 11 attack, they’re hitting you less than 30% of the time because of that ESD bump. For some players, their low odds of hitting Storm will discourage them from even trying.

That same trait has an offensive component as well. It allows her to take a Free action to choose up to 3 opposing characters within 6 squares and line of fire, roll a D6 and then knock back each figure equal to the roll. Saying this is a strong ability is an understatement.

But wait…there’s more! She also has Colossal Retaliation with the new wording “If no friendly character has been placed this turn, choose an opposing character that attacked Storm or damaged friendly character since your last turn…” which has slightly different wording compared to other Colossal Retaliation effects in the past. When using this free action, you place Storm so she can make a close attack targeting that chosen character. If she hits, after resolution AT NO COST, she can use Mind Control as a RANGE, modifying her attack by +3 to target the hit character and two others within range and line of fire. With her eight range and the improved targeting abilities we already mentioned, not many will be able to hide from her as they are made to attack their own team. Just one more tool she has to deal maximum damage each turn and control where your opponent’s characters are positioned.

Storm will be able to disrupt a ton of your opponent’s team, in some cases she’ll get to target characters multiple times between her attack, Mind Control, and Summon a Vortex of Wind!

All that being said, Mojo might be the biggest meta-competitive bomb Monster from X-Men Animated.

Super Rare G022 Mojo has great combat values on any of his 3 starting lines (250, 175, or 75). His starting lines all include Perplex or Probability Control. With his “Behind the Scenes” trait, your opponent won’t be able to attack him from range of more than 4. Improved Movement Characters keeps Mojo mobile. Furthermore, “Keep the Cameras On Them!” lets Mojo move 2 squares every time an opposing character uses Sidestep. Whether it hampers your opponent’s movement or speeds up Mojo, it’s sure to spell trouble for your opponent! Those extra squares of movement help to combo with “Behind the Scenes” to keep Mojo protected.

As good as Mojo’s positioning capabilities are, his biggest strength might be “More Action…Ratings are Dropping” trait. “Whenever a character misses all targets of their attack, give Mojo a Bored token. // Free: Remove 2 Bored tokens to either place Mojo anywhere on the map OR make an attack.” Whether you’re using regular attacks, free attacks, or even Flurry (perhaps from Captain Venom or Weapon H?) Mojo’s Bored tokens will become a big problem for your opponent. Pairing Mojo with the likes of Storm will give you a chance to make multiple attacks in a single turn. Even if you can’t guarantee that you’ll be dealing damage with her attacks, your victory may start to feel inevitable to an opponent who can’t continue to dodge Storm and suppress Mojo.

The last, but not least, Monster we’re going to look at is the rare Wendigo G018. 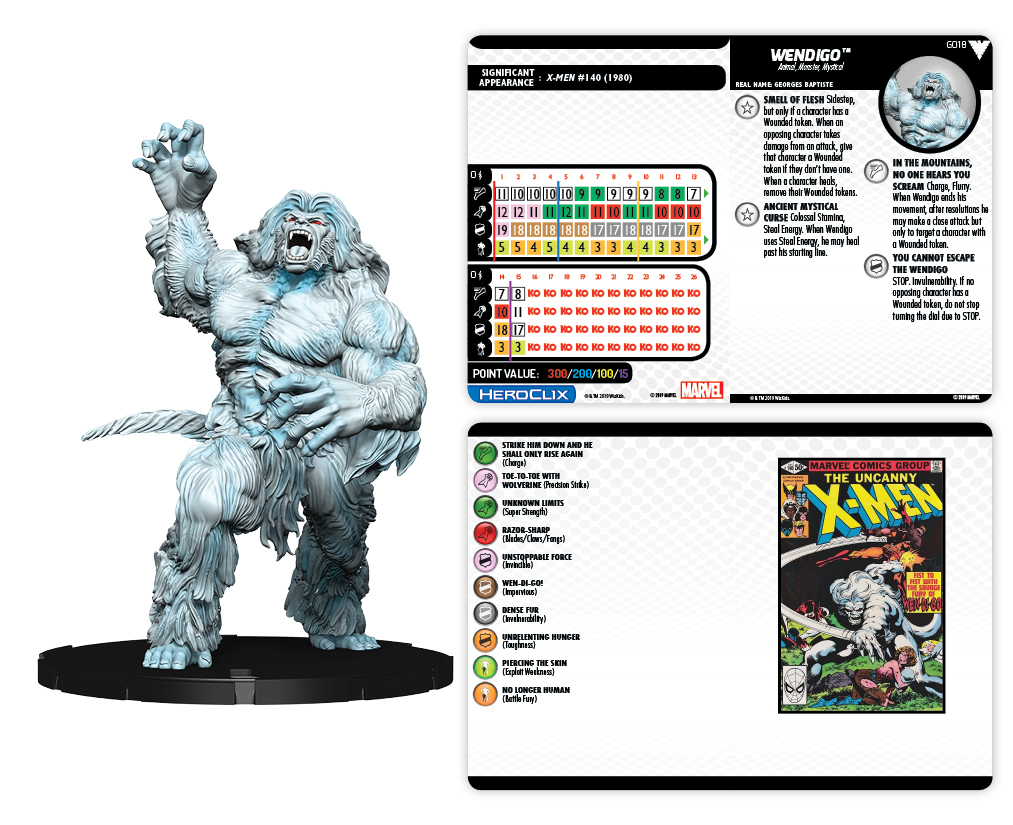 Wendigo can be played at 4 different point values, and they’re all about aggression (300/200/100/15). Wendigo is built to attack for as much damage as possible. Wendigo is a hunter focusing on Wounded tokens. “Smell of Flesh” causes damaged characters to get a Wounded token when they take damage or remove it when they heal, but also grants Wendigo Sidestep if a character has a Wounded token. Unlike many other characters, when Wendigo heals it can heal past its starting line courtesy of “Ancient Mystical Curse.” There are two more benefits to Wounded tokens being on opposing characters. “You Cannot Escape the Wendigo” gives a STOP click, and “In the Mountain, No One Can Hear You Scream” effectively gives you up to 4 attacks in a single turn. Since Wendigo gets bonus attacks after a move action, whether you’re using Charge or Sidestep it’s going to turn into extra changes for damage or Bored tokens.

Step-by-step, what’s Wendigo doing? First – Wendigo can dish out 2 attacks via Charge and Flurry. Since Wendigo will move to use Charge, it will get an extra attack because of its abilities if there’s at least one Wounded token applied. If both attacks missed, Mojo will have two Bored tokens. If Wendigo hasn’t healed past his special movement power, you’ll be able to Sidestep and make an attack against another character (really, 2 attacks because of Flurry). Even if you’re likely to hit an opposing character with your attack (you only need to hit a 6), you’ll be likely to miss at least one of four attacks (about 80%).

Even if Wendigo’s mobility is an issue, Storm will be able to help knockback or Mind Control opposing characters into the danger zone! These figures all have great synergy with one another, allowing you to change your tactics based on opposing teams and positioning. It’s the type of strategy that will get a lot more deadly with practice!

There’s also a surprise preview figure to check out! Sometimes you need a MONSTER to hunt a MONSTER! Who better than the Daywalker himself, Blade! With an accessible and low point cost of 75 or 50, he’s a great addition to a wide variety of teams, Monster or otherwise!

Even with some of the deepest keywords in the game, he could easily go rogue and fit into non theme teams as well given that he has the Team Player team ability making him fit anywhere needed. His stats stay very consistent with his attack never dropping below a 10 and his damage output staying very high with Blades Claws Fangs for more than half of his dial. But beyond the stats, it’s his traits and special powers where he really sinks his teeth in and gives him that edge needed. His “Assembled Avengers”, “Vampire Hunter”, and “My “Gift” From Deacon Frost” traits all hit hard in their own special ways. Firstly, we have “Once per turn when Blade hits, after resolutions you may roll a D6. 5-6: If your force has 3+ friendly characters with the Avengers Keyword, remove an action token from Blade -or- give an action token to a hit character. If you force has 6+, do both.” You are already being rewarded for playing with an Avengers theme team. This particular trait can potentially slow down an opponent’s team or keep Blade clear to continue putting the pressure on the other team by pushing the assault. Second on the list, “Stealth. Improved movement and improved targeting hindering terrain. // When Blade KO’s a character with the Monster or Mystical keyword, after resolutions he can us Charge at no cost. (This may repeat.)

This can be devastating to any team. Some of the above figures mentioned being played potentially on their lower click value can be a gift or a curse facing Blade. Blade starts off with Charge top dial on both starting lines, so if played correctly and against figures meeting the criteria, Blade has the potential to chew through a team marching his way down the battlefield leaving a bloody path behind him and if played right ducking back into the shadows using the full benefit of his Stealth. His last trait, gifted by none other than Deacon Frost himself, grants him Steal Energy. But when he uses it he may heal past his blue starting line, comboing with the other two traits mentioned before you can potentially take a 50 point Blade and in one turn, make him a fully healed, top dialed Blade with a hunger for battle that will never be satisfied. Just when you thought he couldn’t get any better, he does! For 5 of his 7 clicks of life Blade sports his special damage power. “Yeah…They Call Me The World’s Greatest,” Blade has PROTECTED: Mystics team ability. // When Blade attacks a character with the Monster or Mystical keyword, that character can’t use defense powers (that attack).

Blade’s disdain for the Occult really shows with this power! Mystics damage does nothing to the “Daywalker” and his damage slicing right through defense powers is something that can be a game changer. On one hand Blade might be a huge asset to Monster teams as a secondary attacker, on the other hand he might aid Avengers teams striking back against evil! No matter where Blade is fighting, he will surely make his presence felt when he comes out early this year in the Captain America and the Avengers set.

There you have HeroClix fans, Marvel HeroClix: Captain America and the Avengers will be available January 22nd, 2020 for prereleases and all local gaming store shelves the week of February 5th.