We are celebrating 15 years of the #1 selling collectible miniatures game HeroClix, the game that brings your favorite heroes and villains to the tabletop for fast-paced strategic excitement, by releasing a very special set of DC HeroClix figures. DC Comics HeroClix: 15th Anniversary -Elseworlds brings DC characters straight from the pages of some of DC Comics best-selling alternate universe and alternate reality storylines.

Today, we visit the familiar Kingdom Come story to ask King Aquaman of Atlantis how his realm fares in the future. 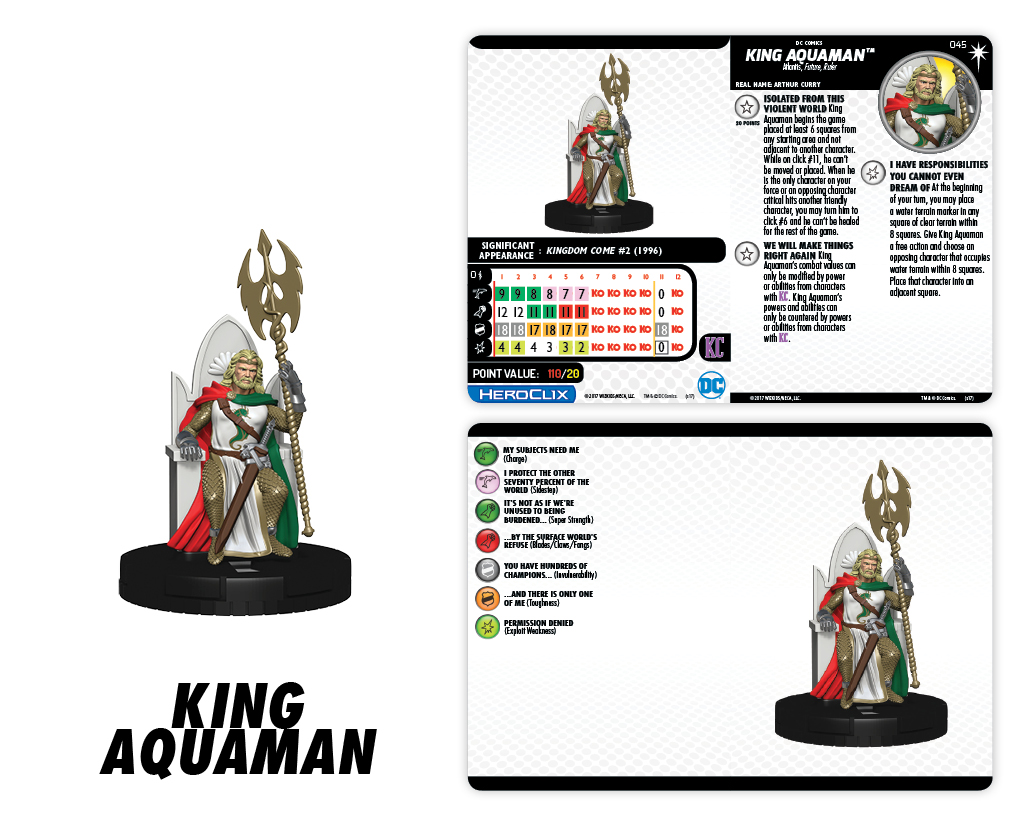 The beautifully drawn, painted, and written Kingdom Come 4 issue mini-series is set in a future where overpowered, amoral, and self-interested vigilantes clash with the traditional superheroes like Superman and Wonder Woman. Arthur Curry passed on his role as Aquaman to Garth and took the mantle of King Orin of Atlantis with his full attention and dedication. Wonder Woman came to him to help create a super-powered gulag prison to contain the out of control vigilantes she apprehended, but he refused her request wanting nothing further to do with surface-world problems.

King Aquaman has several features in common with other characters from the Kingdom Come storyline that have made their way into HeroClix in the last few years. Firstly, he possesses the Kingdom Come team ability that gives him the ability to dodge a successful ranged attack from another character without the Kingdom Come team symbol. It works essentially like Super Senses. He also has the We Will Make Things Right Again trait that prevents any figures that do not have the Kingdom Come team symbol from modifying his combat values or from countering his powers and abilities. He is also Unique and can be played at two point values; 110 points for his full six click dial or at 20 points if you play him Isolated From This Violent World where he begins the game on Click #11 placed 6 squares from any starting area and not adjacent to another character. While on Click #11, if he is your only character on the map or if an opponent scores a Critcal Hit on one of your figures, you may turn him to Click #6 to make a last ditch effort to join the fight. Though he cannot be moved or placed while in Click #11, he does have Invulnerability and a high defense to keep a watchful eye on the battlefield and manipulate it to your advantage with his special power on damage, I Have Responsibilities You Cannot Even Dream Of. This power lets him place a square of water terrain in any clear square within 8 squares of King Aquaman at the beginning of your turn. Additionally, he can take a free action to place an opponent that is in water terrain within 8 squares into an adjacent square. As he slowly floods the map, he can start nudging opposing characters out of position, a square at a time.

At his full 110-point value, King Aquaman shows everyone why they better not mess around with the future ruler of Atlantis! He has a strong close combat focus opening up with Charge, a lofty 12 attack value, Exploit Weakness, and Invulnerability. He can ignore water terrain for movement with the Dolphin movement symbol, and he can ignore pushing damage with Indomitable. Mid-dial, he goes from making calculated attacks that deal penetrating damage to brute muscle with Super Strength and Toughness. For his last two clicks, he gets his wits about him again as he uses Sidestep to precisely position himself for devastating Blades/Claws/Fangs attacks with Exploit Weakness representing his unmatched skills with his royal trident.

Thanks for reading! Join us again as we reveal more exciting alternate reality characters and highlight strategies and team builds from the DC HeroClix: 15th Anniversary – Elseworlds set and visit the WizKids Info Network to find upcoming Release Day Events near you! Don’t forget to enter our 15th Anniversary Video Contest!

Until next time, his highness bids you farewell and fair dice rolls!