Welcome back to your Clix fix as we review two exciting figures from the Teenage Mutant Ninja Turtles HeroClix:  Shredder’s Return set, available at friendly local game stores today!  This third Gravity Feed set adds even more characters from the 32-years of TMNT history, based on both the comics and animated TV series.  Today we have a pair of Shredders for you, Shredder Clone and the chase Shark Shredder!

In the 1984 Teenage Mutant Ninja Turtles comic book series the turtles manage to defeat the Shredder rather early on in their careers.  Though they thought he was dead, the Shredder later returned to lead the Foot Clan again thanks to a resurrection technique using mystical worms that basically cloned and rebuilt his body.

Coming in at a healthy 75 points, the Shredder Clone brings a few handy traits to the table in addition to being a close combat dynamo.  His first trait, only usable if you pay an extra 10 points when building your force, Ocean Resurrection allows you to replace Shredder Clone with #035 Shark Shredder on click #4 and can only be healed when using Steal Energy when Shredder Clone would be KO’d.   (See below, we’ll get to Shark Shredder in minute).  His next trait Duel of Twisted Honor gives  Shredder Clone a little extra protection because at the beginning of the game he can choose an opposing character that is not the lowest point value character on that player’s force and anybody else who attacks Shredder Clone gets -2 to their attack value, unless the chosen character has been KO’d.  That should give you plenty of breathing room to get Shredder Clone where you want him because with an 18 defense value and Energy Shield/Deflection and an additional -2 to almost any attacker’s attack value he will be very difficult to hit with a ranged attack.  His third trait Shredder Elite lets him use Sidestep to inch up the map or reposition his footing, but also deals one penetrating damage to any opposing character that he becomes adjacent to when he moves, as long as they were not adjacent to him at the beginning of the turn.

Going to his dial, Shredder Clone has a fairly consistent power set.  He has the deadly combination of Flurry and Blades/Claws/Fangs for most of his dial, only wavering on his first and last clicks where he prefers Stealth to strike from the shadows or sneak back into them to heal with Regeneration.  He starts off with a plan for his Foot Clan and uses Leadership to get the most out of them, but once he takes a few clicks and his attack value drops from a deadly 12 to a healthy 10, he goes rage blind and picks up Battle Fury.  Rounding out his dial options, Shredder Clone also has Indomitable letting him carve up his nefarious schemes as quick as he can.  For keywords he can be a strong fixture on a Foot Clan, TMNT Villain, Mystical, Ruler, or Warrior keyword themed teams.  He will be tough to KO for sure, but what happens when he does?  If he doesn’t stay down what does he come back as? 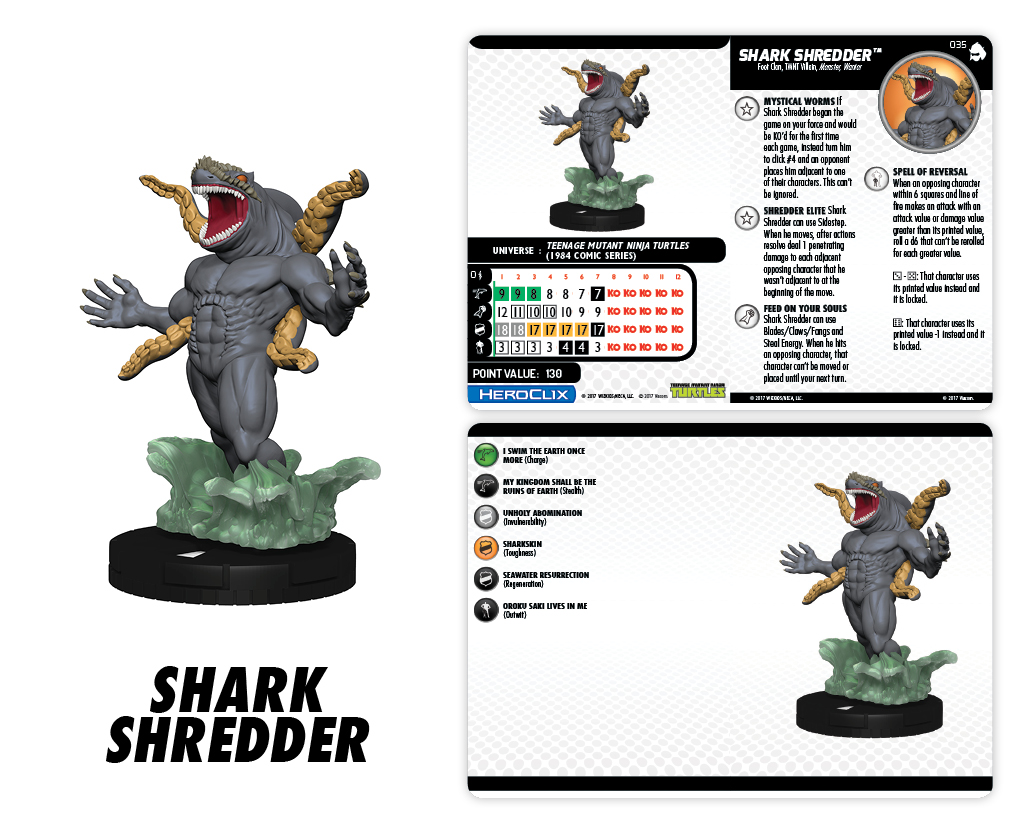 Because the sharp teeth on the inside of a shark’s mouth aren’t scary enough, Shredder Clone turns into a shark with arms, legs, and a few more sharp objects, the Shark Shredder.  If he  enter the game using Shredder Clone’s Ocean Resurrection trait, it basically gives him an extra four clicks of life with some Toughness to keep him swimming while he has Outwit with Stealth and Regeneration on his very last click.  If instead you pay the 130 points to play Shark Shredder at full dial, you’ll have quite a beast on your hands.  If he starts the game on your force, his Mystical Worms trait kicks in returning him to the map on click #4 the first time he is KO’d directly adjacent to an opposing character of your opponent’s choice, and this trait cannot be ignored.  With the Indomitable defense symbol, Aquatic movement symbol, and the Giant Size symbol he doesn’t care much about terrain for movement or pushing himself for actions.  Also, with those he gets a little extra close combat reach using Charge and an easier time rolling for breakaway from normal sized characters, which is perfect for making use of his second trait, Shredder Elite.  The Shredder Elite trait, shared by the Shredder Clone and the other Shredder chase figures, lets him use Sidestep and when he moves, he can deal one penetrating damage to each adjacent character that he did not begin the move adjacent to.  At full points he also begins the game with Invulnerability.

Shark Shredder also has two special powers; one on damage that he starts with and one on attack that he gets on his second through fourth clicks.  On damage he has Spell Of Reversal that takes effect when an opposing character within 6 squares and line of fire makes an attack with an attack or damage value that is higher than their printed value, whether replaced or modified.  When that occurs you roll a d6 for each such value that cannot be rerolled; on a 3 to 5 that character uses it’s printed value instead and it is locked, on a 6 they use their printed value -1 as a locked value instead.  Those are pretty fair odds of limiting an opponent’s bonuses from Close Combat Expert, Ranged Combat Expert, Perplex, Empower, Enhancement or traits that increase attack and damage values (like the Turtles figures in the Fast Forces Pack).  Getting back to offense, Shark Shredder’s attack special Feed On Your Souls lets him use Blades/Claws/Fangs and Steal Energy and also, when he hits a character they cannot be moved or placed until your next turn.

For keywords, Shark Shredder has Foot Clan, TMNT Villain, Monster, and Warrior. If a themed team centered around the Shredder Elite strikes your fancy, then Shark Shredder, Mini Shredder, and Shredder Clone get you to 295 points!  They’re not much for ranged attacks but they all have Sidestep and can deal penetrating damage just for getting adjacent to opposing characters with the Shredder Elite.  That’s enough to knock a few clicks off all but the most Invincible opponents without even rolling for an attack.

That wraps it up for today.  Don’t forget to visit your friendly local game store to pick up  Teenage Mutant Ninja Turtles HeroClix:  Shredder’s Return.  Have a happy release day and until next time, sharpen your shoulder pads and shred on!